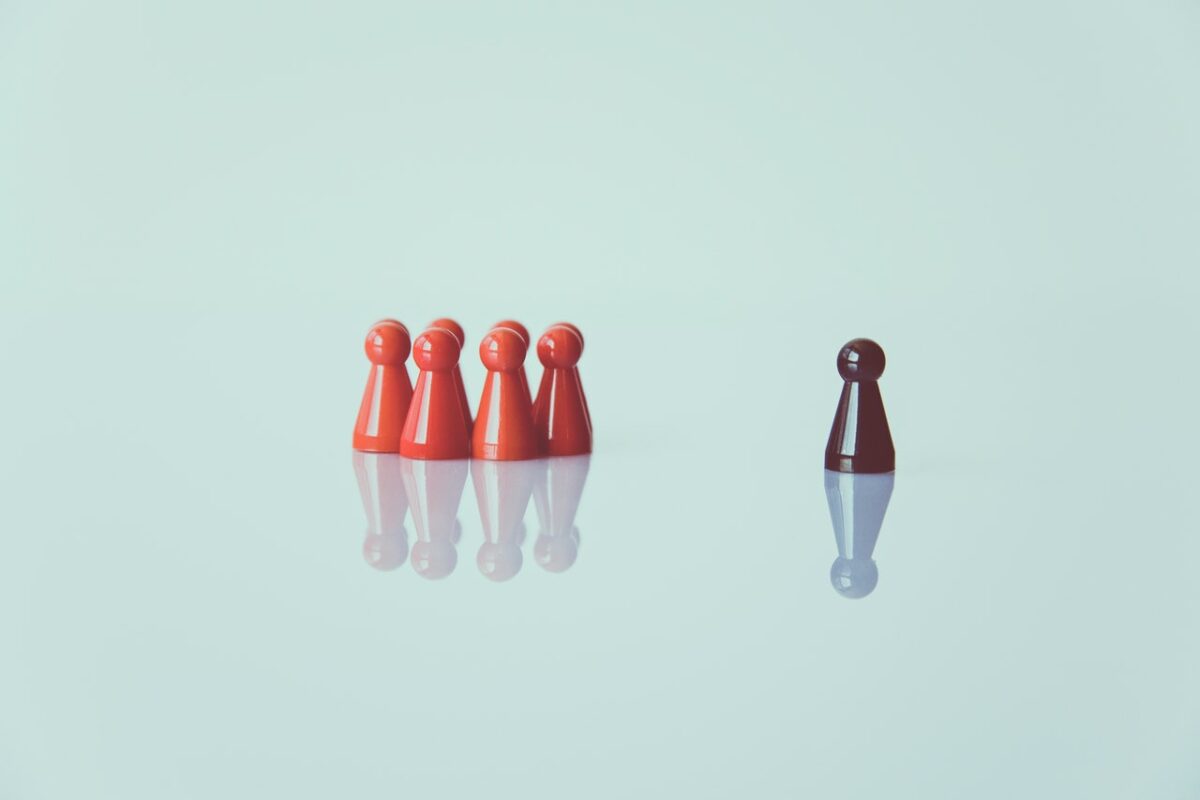 Solana [SOL], now ranked fourth by market cap, set another all-time high of $257 on 7 November. In fact, to many, it seems like SOL won’t stop for quite some time. In the last year alone, the crypto-asset has accrued over 11,216% ROI to its HODLers.

After Solana flipped Cardano to take the fourth spot, there were speculations that BNB’s third spot wouldn’t be held strongly for long too and, SOL could eventually take over. But, what contributed to this hike and how will SOL’s trajectory look?

Solana’s trajectory so far has been monumental. In fact, in just three months, the altcoin rose by 945.66%. While the NFT hype was a key driver behind SOL’s price growth, its utility and growth in the DeFi space have favored the uptrend.

In the last week alone, Solana’s Total Value Locked increased sharply and hit a new ATH of $14.5 billion. Notably, DEXs continued to grow steadily at $7.4 billion while TVL of the asset sector increased strongly too.

At the same time, the lending sector’s TVL increased strongly and touched $1.77 billion, growing by 74.25%. All in all, this seemed to be a good sign for lending on Solana in the near future. 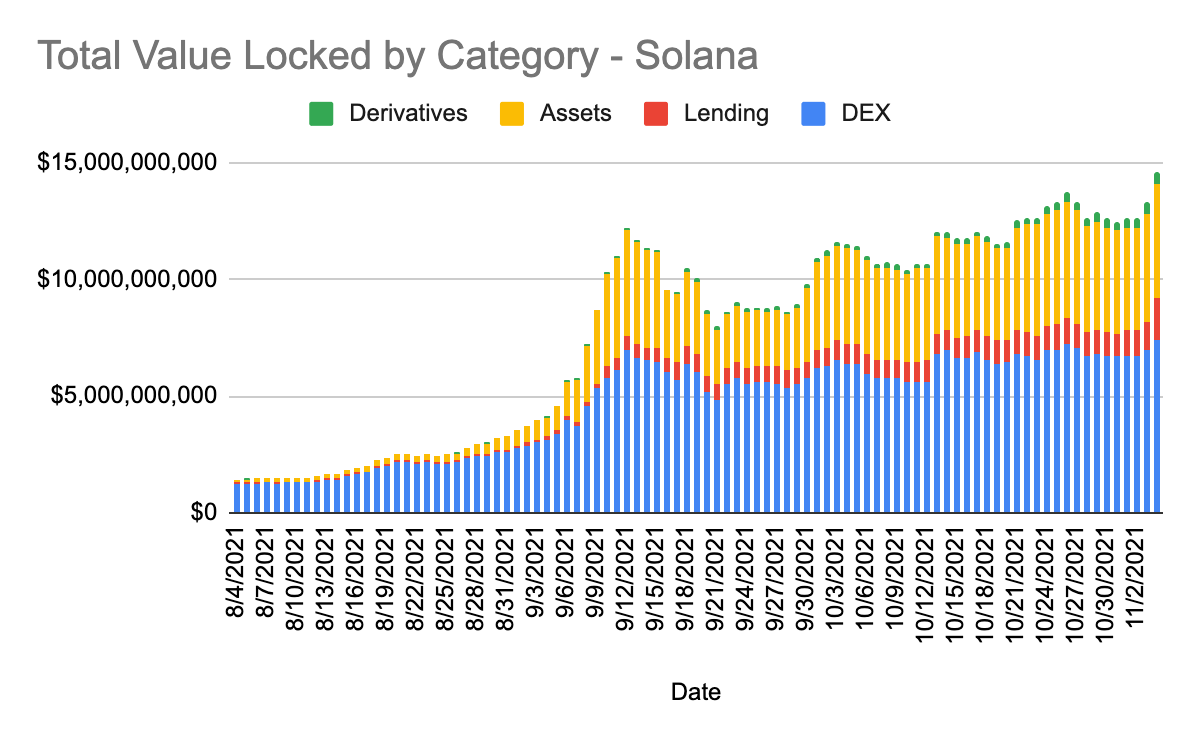 However, SOL’s path to the fourth spot hasn’t been too pleasant. Solana has had its share of defeats. Nonetheless, it seems like Solana has been largely unaffected by such FUDs.

More recently, the network was accused of sharing fraudulent figures about SOL’s circulating supply by Justin Bons, CEO of Cyber Capital. The FUD didn’t weaken SOL’s rally, however. In fact, an ATH followed soon after the claims were made.

Likewise, in September, Solana’s network outage, one which many feared would pull the asset down by many ranks, only fueled some short-term price turbulence. Put simply, seems like Solana has maintained some strong resistance against FUDs and social conundrums.

So, what’s behind the rally?

Solana has maintained low volatility, reaping steady ROIs for its holders in both the long term and the short term. Solana’s volatility was at 0.98, close to its lowest year-to-date (YTD) levels. Further, the asset has been comparatively low risk, with its high Sharpe ratio highlighting the same. 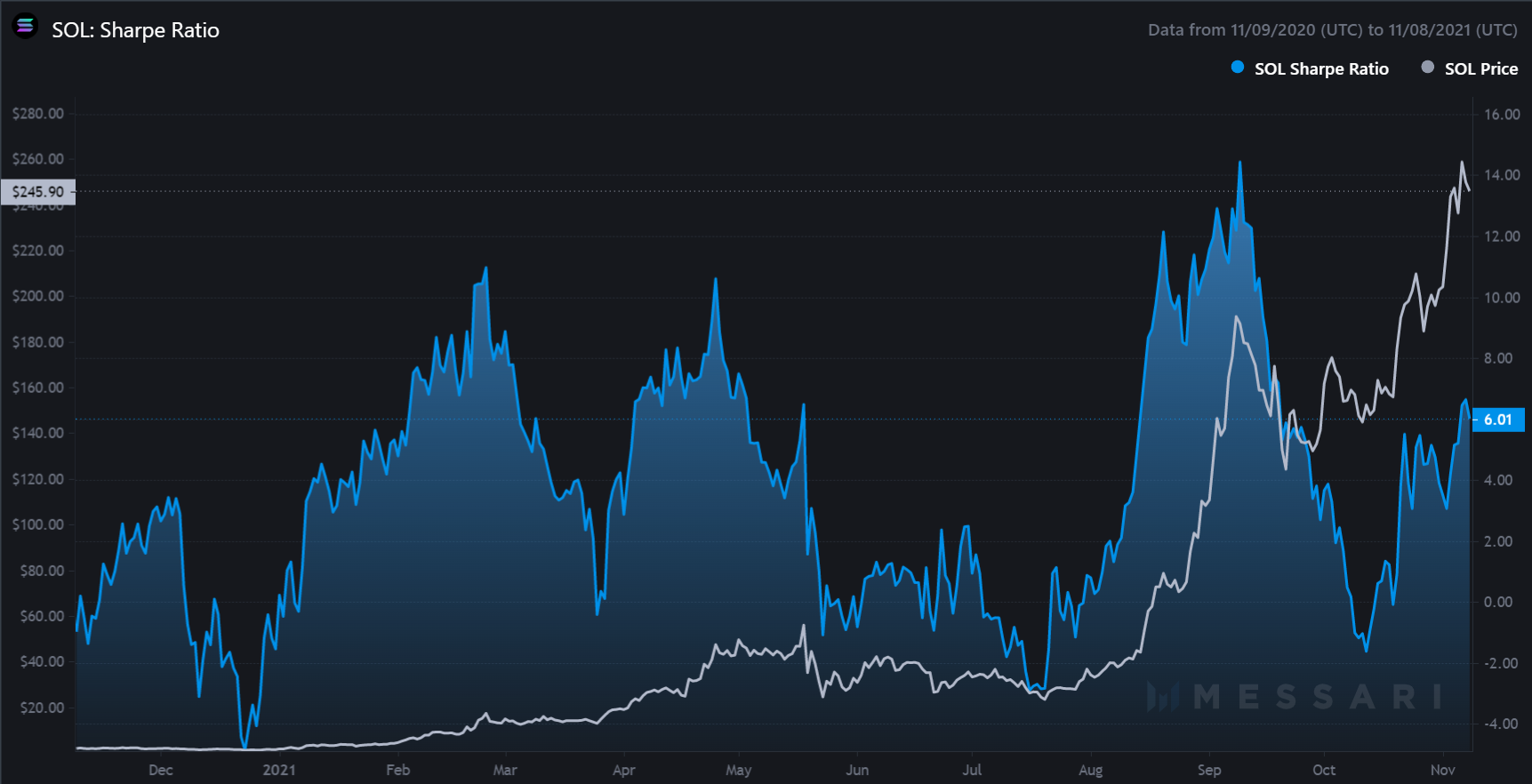 Solana also claims to be a more scalable and cheaper alternative to Ethereum. The Ethereum network, for instance, can only handle about 12-14 transactions a second. On the contrary, Solana claims to be able to handle 50,000 TPS, making it one of the quickest blockchains in the market.

Other than that, developments like the sales of the Tungsten Cube NFT on Solana that raised $100,000 last month further pushed the asset’s and blockchain’s value. Thus, while SOL’s growth in the future looks promising, entering the market is what’s going to be tricky since the alt is already oscillating close to its ATH.

A short-term correction, however, can present a good buy opportunity and an effective trading strategy would be support/resistance trading. However, doing your own research would be the best way to go.

Related Topics:Solana ATH
Up Next

Dogecoin’s latest update and what it means for the price