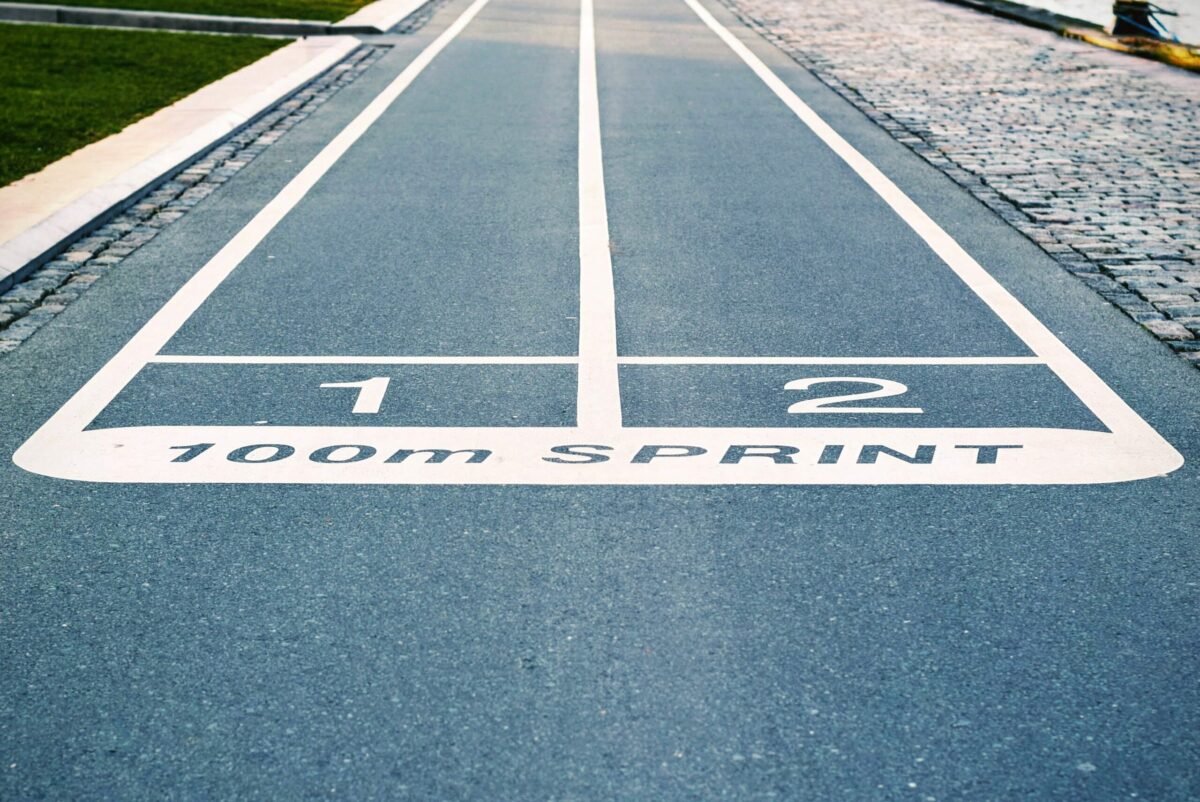 A couple of things did not change during this bearish cycle – The development activity of emerging projects and the fierce competition between existing ones. The market performance of DeFi and market moderators such as Ethereum, Binance Smart Chain, and Polygon has only fueled this animosity.

And yet, despite tremendous market downfalls, the on-chain activity of DeFi applications on these platforms has been eye-catching, with Binance Smart Chain, especially, consistently improving its cause.

In one of our recent articles, we discussed the recent decline of BSC in terms of volumes and its parent exchange also facing regulatory concerns. But, it is critical to focus on BSC’s progressive growth over the entire previous quarter. And the numbers speak for themselves. 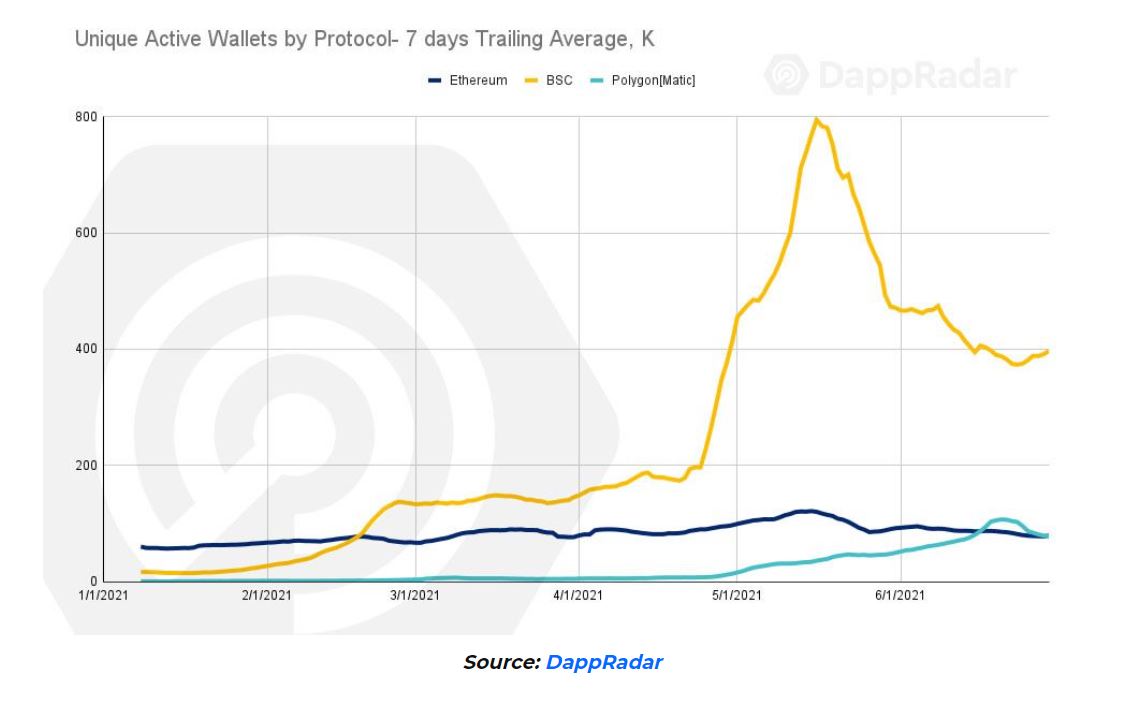 According to Dappradar, Binance Smart Chain was the most used blockchain in Q2 2021, beating the likes of Ethereum and Polygon in terms of activity. BSC had over 420,000 daily unique address wallets (UAW), a hike of more than 400% from Q1 2021. The total value locked in BSC also grew by 28.9%. In fact, BSC touched a new record on 12 May when the platform reached 1.02 million UAW.

There are a couple of things to consider now. Ethereum remains the leader in terms of total value locked or TVL, and it continues to cater to three tremendous projects in Compound, AAVE, and Uniswap.

And yet, the BSC’s ace up its sleeve has been the growth of PancakeSwap. BSC’s TVL was close to $25 billion, at press time. And, approximately 28% was driven by PancakeSwap. The DEX governed by the CAKE token surpassed $7 billion in TVL, increasing by 32.8% quarter on quarter. 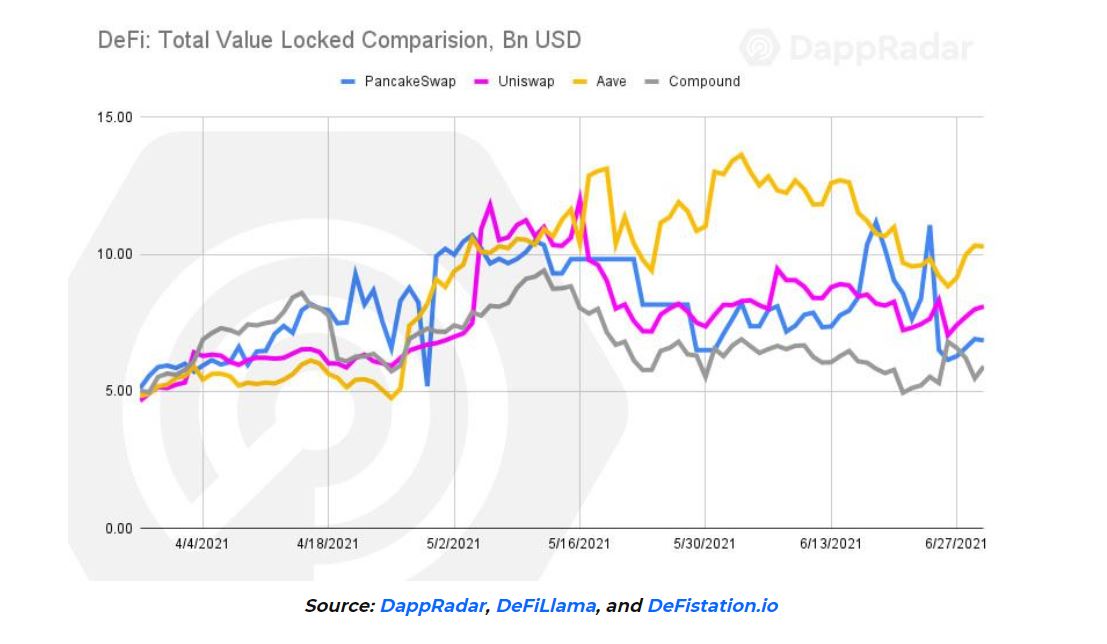 Additionally, PancakeSwap’s TVL numbers were higher than Uniswap and Compound as well, lagging behind only AAVE in Q2 of 2021.

Is this an edge for BSC?

As mentioned previously, while BSC enjoyed a consistent period of growth, Ethereum continues to cater to AAVE, Compound; projects that have acquired community trust over the past few months.

However, when it comes to BSC and its promotional linearity, other dApps have started to grow at a relative rate too. Autofarm, the automated yield farming DEX aggregator, is the 2nd most-used dApp on BSC. It has over 20,800 daily unique wallets, with an average hike of 252% on a month-over-month basis – A whopping 396% increase from Q1. 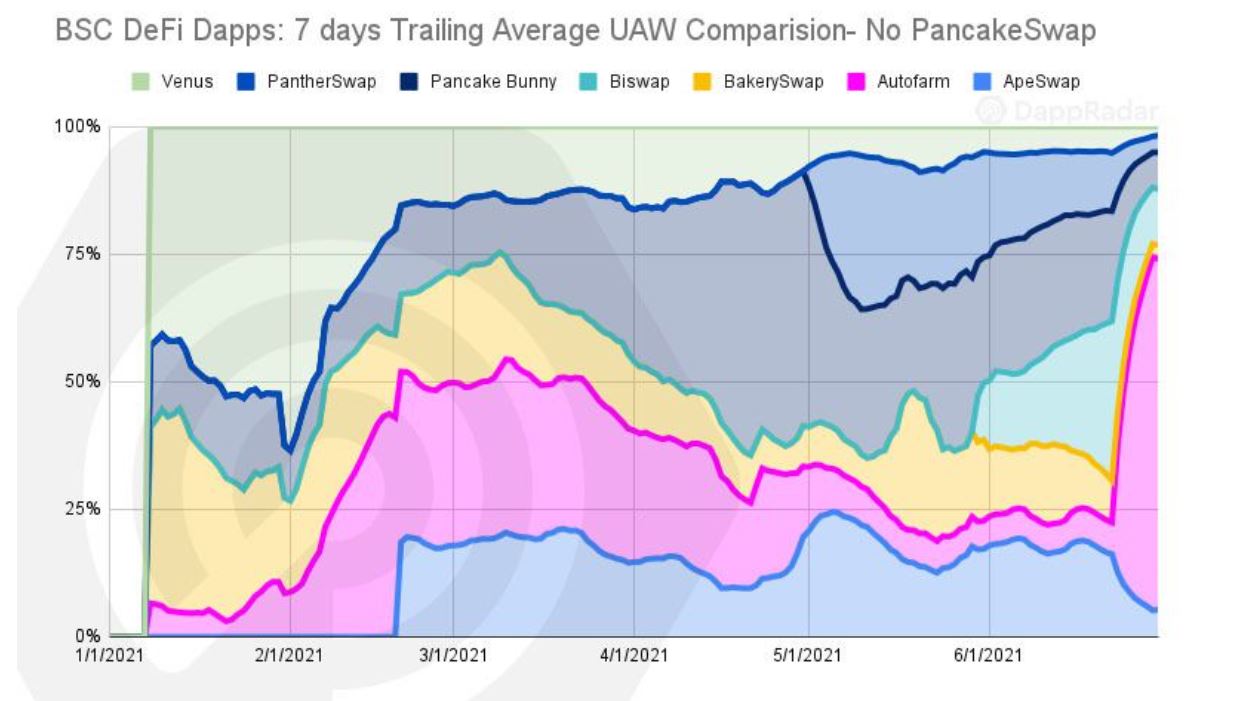 The road ahead with Binance Coin?

It is difficult to correlate BNB’s price growth with the development of the Binance Smart Chain. However, it is important to note the BNB remains the base collateral for the BSC chain. With a plethora of interest in DeFi during market drawdowns, these levels will only rise during a bull cycle.

BNB touched a price point of $650. So, it will be expected that the asset will be able to match its previous ATH while building towards the $1000-mark.