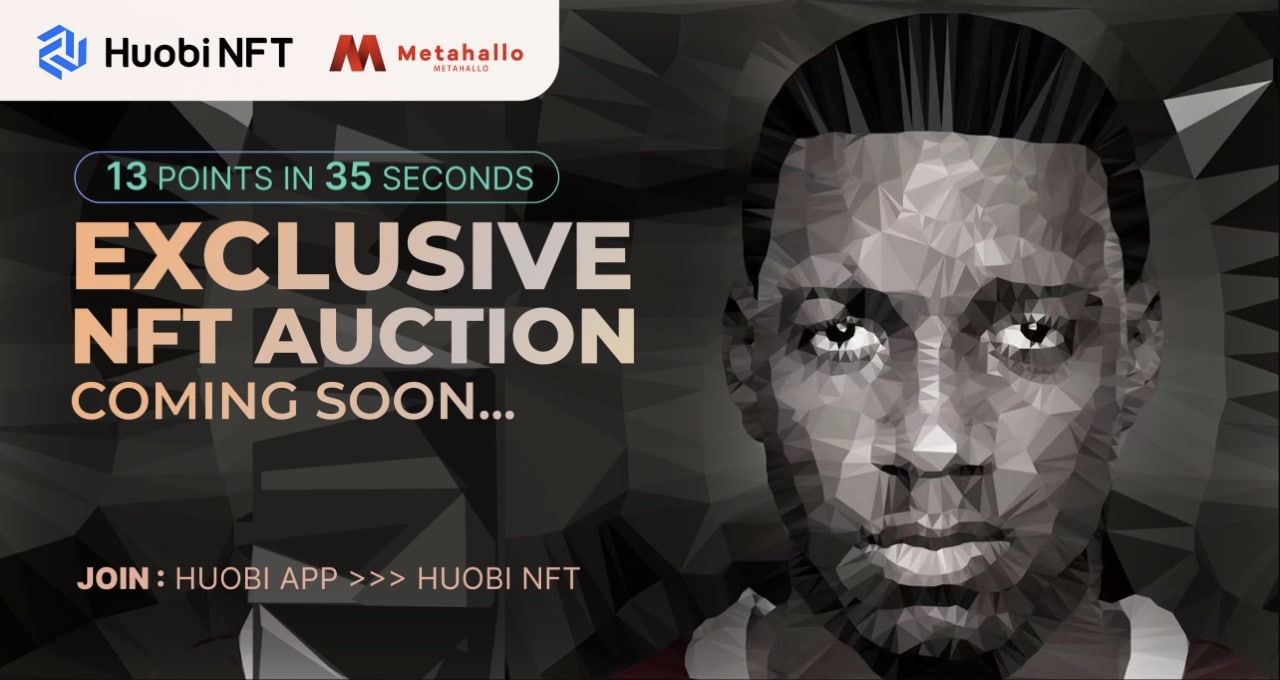 Huobi NFT, the official non-fungible token (NFT) marketplace of Huobi Global, today announced that it has partnered with Metahallo, a web3.0-based platform, to roll out a “McGrady moment” NFT auction centered around the career highlighting the performance of NBA star Tracy McGrady during a groundbreaking match in December 2004. This rare NFT work, an exclusive video NFT immortalizing 33 seconds of McGrady’s dazzling performance for the Houston Rockets against the San Antonio Spurs, will be showcased at the Huobi NFT zone at a British auction with a starting price of US$3,500 on 25 May 2022.

The “McGrady moment” NFT features renowned basketball player Tracy McGrady who scored 13 points in 33 seconds during the final moments of a nail-biting game on 9 December 2004 between the Houston Rockets and the San Antonio Spurs and helped the Rockets magically beat the Spurs 81-80. This brilliant performance continues to inspire basketball players and fans to this day.

Metahallo allows participants to experience the joy of digital spaces by having their identities and digital assets function across different games, websites, and virtual worlds. Featuring plug-and-play functions like NFT issuance, live broadcast,3D environment, interactive video, customized avatar, social networking, and more, Metahallo enables users to participate in an interconnected digital space with their decentralized Identities (DID). The partnership with Huobi NFT to release the “McGrady moment” NFT signals a new chapter forward for both the NFT industry and the metaverse.

Starting on 25 May 2022, the auction will last 35 hours. All participants in the auction will receive a Huobi NFT Issued on the Ethereum Chain, the final winner will be able to trade this “McGrady moment” NFT in the secondary market.

“Tracy McGrady’s epic comeback against the Spurs in December 2004 lives on in the hearts and minds of fans and players alike to this day,” said Huobi NFT team. “Reworking this moment into an NFT ensures his contribution will live on forever. We hope this auction will enrich both the NBA fan community and the burgeoning NFT industry.”

For more information about this auction, please visit here. In addition, users can also receive updates through Tracy McGrady’s Facebook .

Huobi NFT is the official NFT platform of Huobi Global. The platform will not only provide users of Huobi Global with the world’s best NFT assets but also provide more application scenarios for various NFT assets to manifest their respective value. Users of Huobi NFT can realize NFTs’ utility and commercial value through accessing products in the Huobi ecosystem. In the future, the platform will also leverage its ecosystem development to create an entrance to the metaverse, with a foundation based on NFT assets.

Hedera [HBAR] looks ripe for an unprecedented recovery thanks to its…