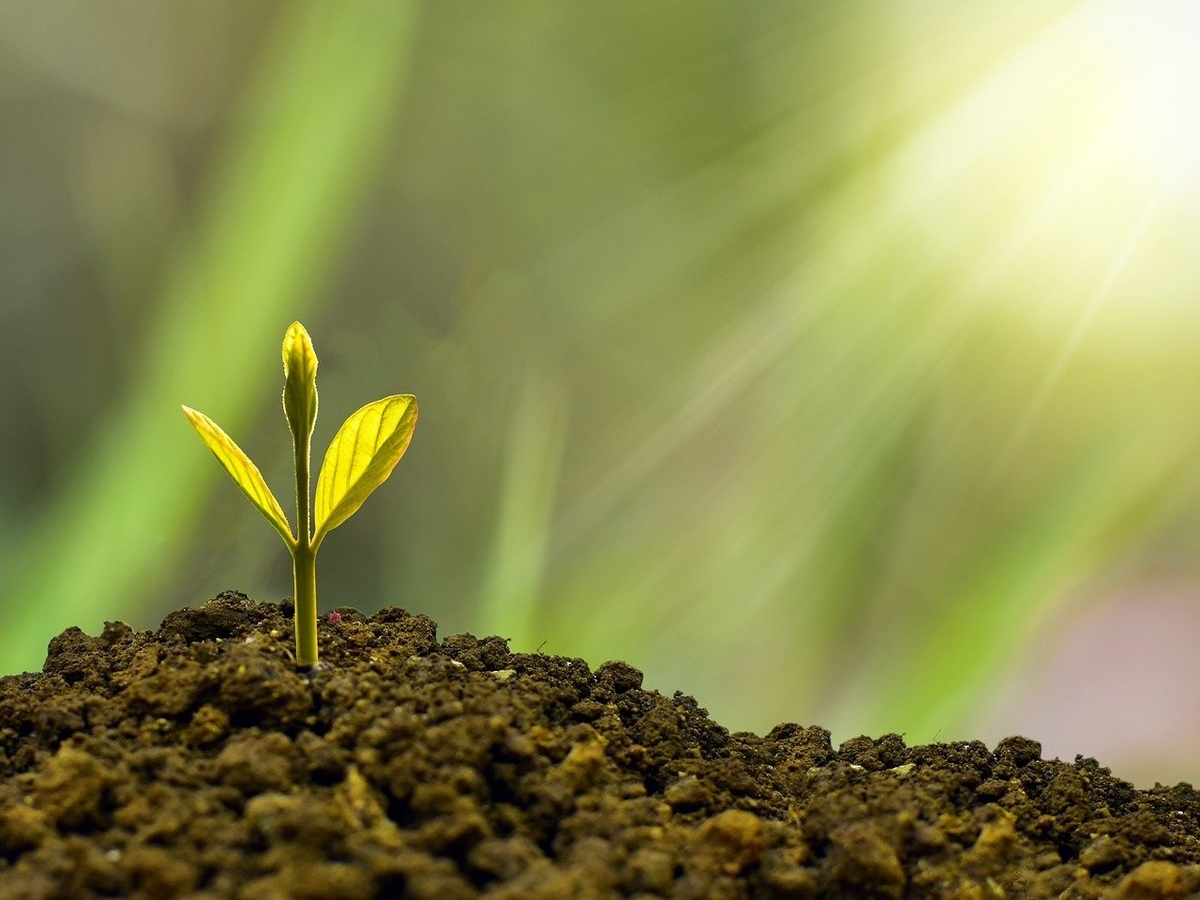 Cardano, one of the market’s largest altcoins, has bounced back satisfactorily well over the past week. The alt had been trading at its one-month low ($1.05) on the 20th of July, but pumped by more than 16% in the week that followed. ADA was valued at $1.38 at the time of writing.

At this stage, Cardano’s short term RoI seems to be pretty good. However, to further boost their earnings, market participants are now staking their ADA HODLings. According to data from Staking Rewards, close to 35.51% of the total ADA supply is currently staked. The value of the same explicitly stands a little over $14.8 billion. 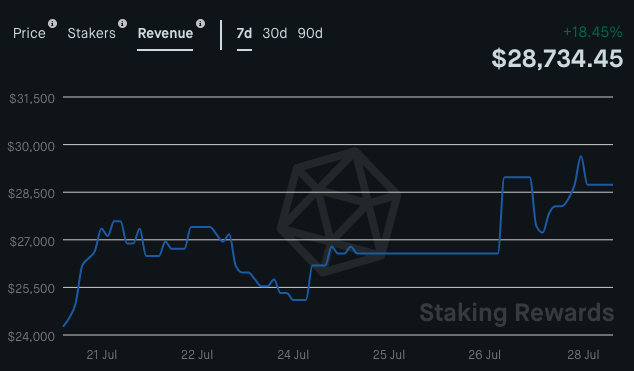 Notably, staking rewards for Cardano has drastically risen since 21 July. To further quantify, staking Cardano fetches investors an annualised reward rate of 12.82%. The same, when adjusted with the inflation of the network’s supply, would come down to 8.4%, which again is a decent share.

The rise in rewards earned essentially means that new investors have the required incentive to step into ADA’s arena at this point. The same was also evidenced by the rise in ADA’s real volume. The aforementioned metric reflected a value of $274 million on the 10th of July, but managed to climb up to $687 million by the 27th of July.

At this point it should be noted that staking single-handedly cannot pull up the alt’s price. To further know the state of the alt, it becomes critical to look at various other on-chain metrics. 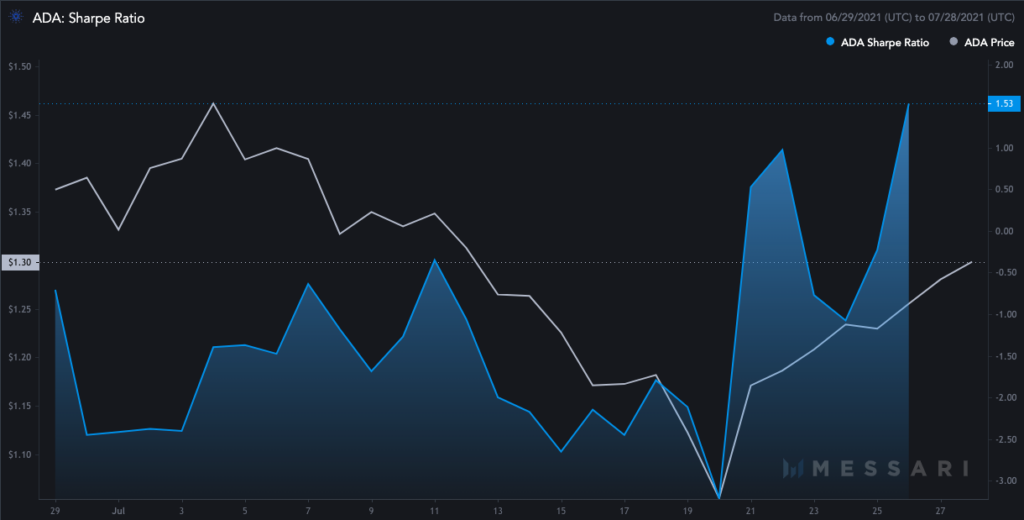 Cardano’s sharpe ratio, at the time of writing, was heading northward. The same stood at its one-month peak (1.53) at press time. This metric specifically outlines the potential risk-adjusted returns of an asset. As a rule of thumb, a sharpe ratio more than 1 considered ‘acceptable’ to ‘good’. Thus, higher the sharpe ratio, the better the returns fetched. To be more clear-cut, ADA holders, at this stage, are being compensated more than usual for the risk borne.

Now even though the sharpe ratio has painted a positive picture, the alt’s adjusted NVT does not seem to be appealing. This indicator typically describes the relationship between the market cap and transfer volume. Notably, Cardano’s adjusted NVT ratio was as high as 56.7 on 11 July. However, the same merely stood at 12.17 at the time of writing.

The current low ratio indicated that the network value was not able to keep up with the increased usage of the network. This essentially represents a halt in ADA’s growth stage and stirs a bearish sentiment.

Furthermore, ADA’s market cap dominance has also been dropping from its recent 3.32% ATH. This means that Cardano’s value in context of the larger crypto market is receding. The same, at the time of writing, reflected a value of 2.5%.

Despite the drop in ADA’s dominance, it should be noted that the current level is comparatively higher when compared to the last few months of 2020. The same can be evidenced from the chart attached. 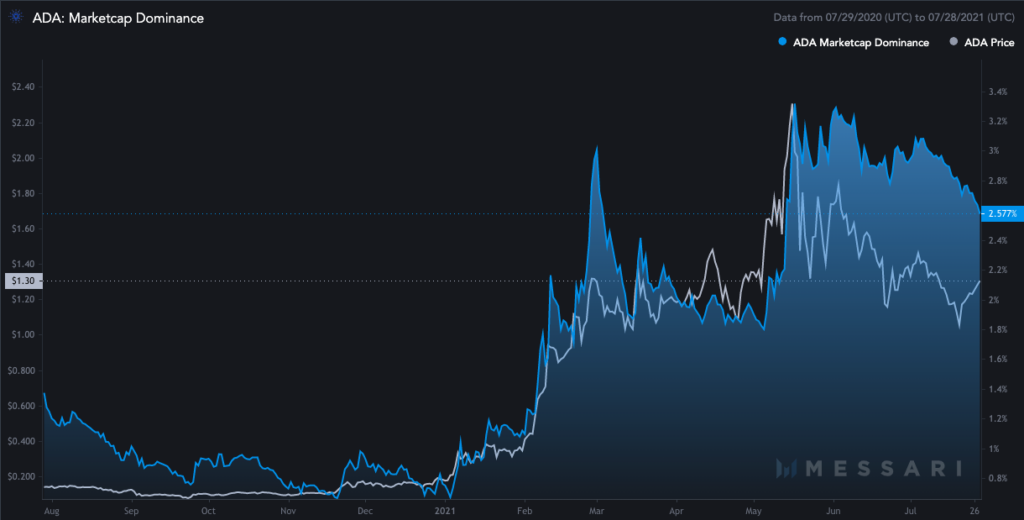 What’s more, Amy Arnott, a portfolio strategist at Morningstar recently asserted that ADA could stand alongside BTC and ETH and become one of the “big three” mainstream cryptos. Further commenting on the “promising altcoin,” she said,

“Cardano is similar to Ethereum, in that it’s a protocol that has a lot of potential technical applications. There’s a lot of enthusiasm about Cardano, and also various stablecoins.”

Bitcoin: This has led to a higher probability of market dumps