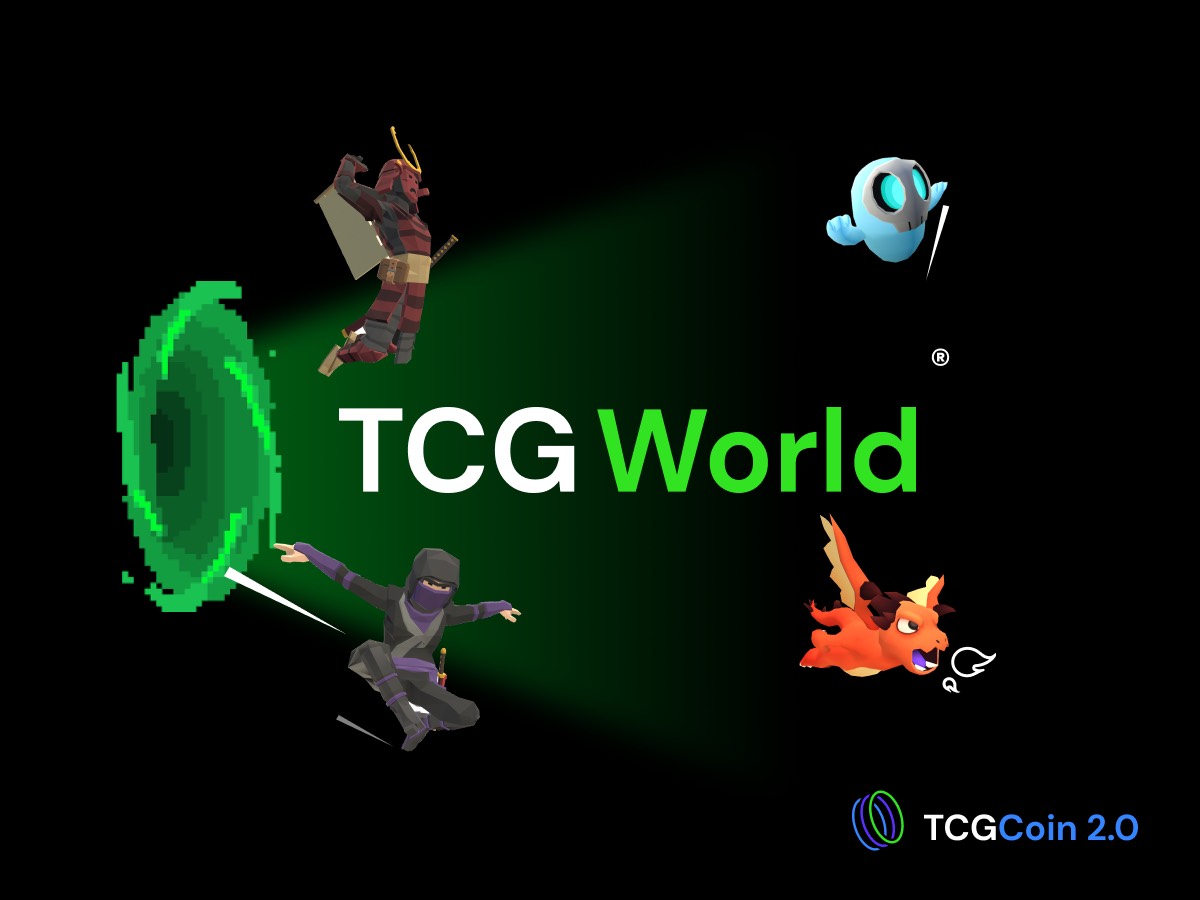 While virtual reality games have been a part of the gaming industry for a while now, the metaverse is a relatively newer concept that is gaining attention. Metaverses are a virtual world where users can not only play games but also interact with others, grow their characters, buy items and build a career path.

TCG stands for Trading Card Game and consists of the TCG Gaming platform, TCGCoin 2.0, and TCG World. It is a play-to-earn blockchain-based game that allows users to own lands, carry out quests and adventures, and earn TCGCoin 2.0 in the process. It is 800km2 making it the largest open-world metaverse on Binance Smart Chain.

TCG World is a metaverse that represents a virtual world gaming concept where users get to interact with each other. In TCG World, users can invest in virtual real estate, hunt for NFT collectibles, earn TCGCoin 2.0, and start their virtual career while exploring the metaverse.

Everything that a player buys/owns in the game is an NFT from real estate, vehicles, pets to player avatars, and trophies.

Both TCG Gaming and TCG World use TCGCoin 2.0 as their native currency thereby creating a continuous demand for buying and selling of virtual world NFTs and real-world collectibles.

The game follows a play-to-earn approach and has its own story that progresses as a player spends more time in the game.

TCG Gaming is an online marketplace for collectible sports and gaming cards like Magic The Gathering, Yu-Gi-Oh, and Pokemon. Users can list their available items after creating a free account and sell their items to a global audience. The payments can be done in cryptocurrencies including TCGCoin 2.0, BNB, and BUSD.

Currently, the team is also working on creating a network of middlemen who will work as authenticators and graders and will be assigned the task of ensuring the items sold are of good quality and verified with what is advertised.

They also have a smart contracts system that keeps money in an escrow account till the product is delivered.

The game has two types of land plots that can be bought by players: farming and regional plots. While farming plots give players a chance to earn TCGCoin 2.0, regional plots have their own unique passive benefits and rewards players for owning land in that region. They are distributed among 4 main regions of Asia, North, East, and Forest. 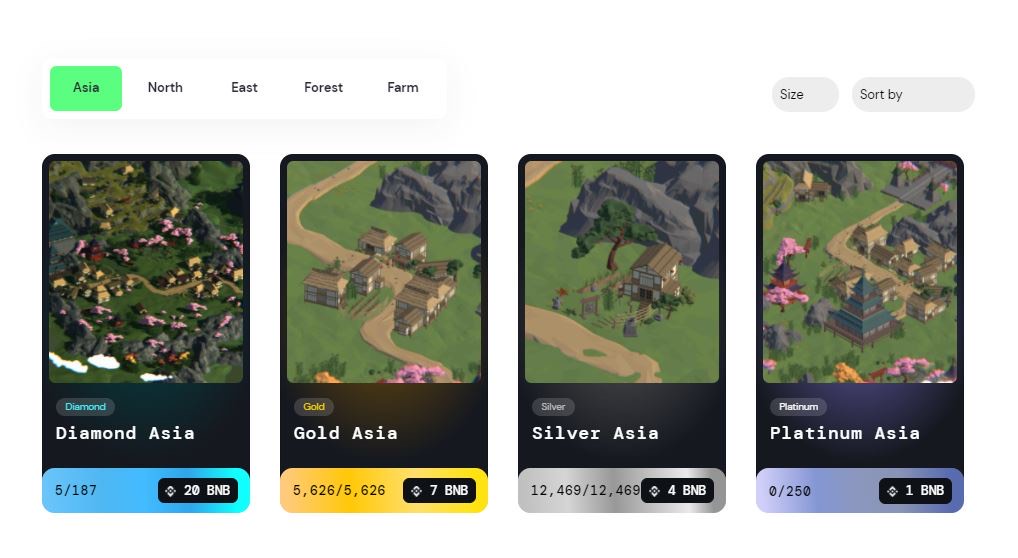 Across all 4 regions, the public sale plots are limited to only 100,000. Every city will have developer-owned plots that would be up for lease on fixed-term periods for a commercial purpose.

Players will also find a lot of different creatures while exploring the game. They are tameable and once caught can be moved to a player’s plot where they can be evolved, trained, and traded. Players can also fight their creatures with each other in arenas.

Use cases of TCG World

TCG World has several use cases for the community:

The architecture of the TCG ecosystem

While the TCG ecosystem is a set of services connected together through the internet, it consists of 4 main elements: 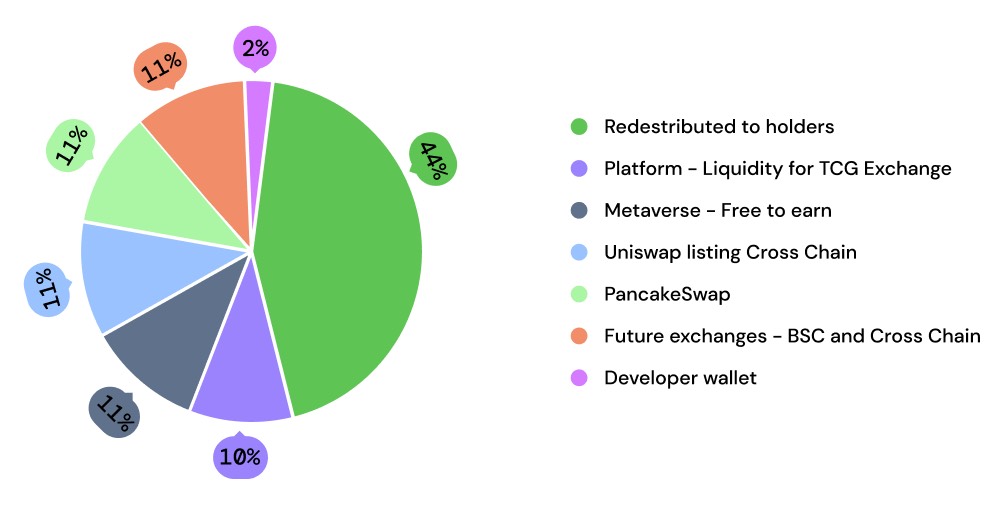 The TCGCoin 2.0 has a total supply of 280,000,000 which is further divided into a 44% share that would be redistributed to holders, and 11% share for the metaverse, Uniswap listing cross-chain, PancakeSwap, and future exchanges (BSC and cross-chain) respectively. A 10% share would be set aside for liquidity on the TCG Exchange while the last 2% would go to the developer’s wallet.

TCG World is the first 4K virtual reality low poly game to become a part of the Binance Smart Chain. It allows users to own virtual lands and get passive incomes through them and capture, train, and evolve NFT creatures.

It also has a central streaming stadium for live TCG tournaments and virtual concerts.

As mentioned earlier, TCG World is building a metaverse that would allow users around the world to come together as a virtual global community.

For more information on TCGCoin 2.0 please check out their Telegram Channel or visit their official website.