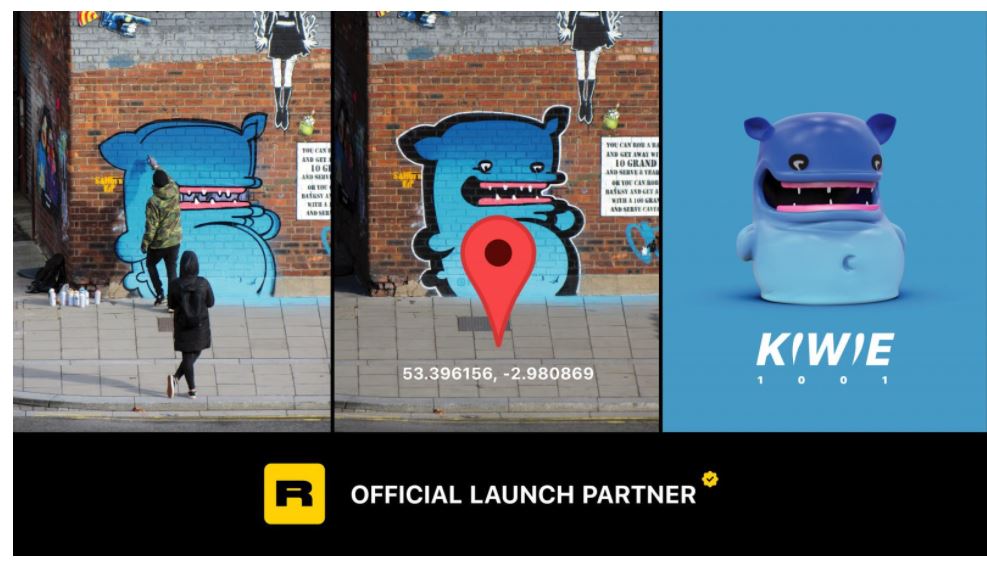 KIWIE, a worldwide-famous Latvian street art collective, is unveiling a new series of blockchain-enabled art installations across the world. Building on the signature Fat Monster character developed by KIWIE back in 2006, the artists are making street graffiti that are owned directly by the holder of the NFT.

KIWIE NFTs will each come with a custom-made virtual 3D figure representing a real spray painting somewhere in the world. The figure will include a geotag associating the NFT to its respective artwork. The holder of the NFT effectively owns the street art and is free to resell the artwork. In addition to the virtual 3D figure, participants of the NFT auction will also receive a metal card representing the Fat Monster they bought. Should the Fat Monster painting be removed or covered in real-life, the NFT will turn into a unique “ghost monster.”

The Fat Monster grew to a large community of fans, with over 18,000 followers on Instagram. People have fun looking for them in any city they go and share the finds on social media. Fat Monsters in each location have their own unique design, often radically different from any other while still maintaining the same essence. A KIWIE Fan Art movement also sees community members drawing their own takes on the Fat Monster.

“The Fat Monster is a unique and iconic creation, and it’s different from what many other street artists do,” said Kristaps Vaivods, Lead Business Strategist at KIWIE. “I just love the global community that formed around the cute monsters, and I hope that the ability to really own a piece of street art will be even more inspirational.”

NFTs are revolutionary for the street art ecosystem because of their non-invasive nature. Previously, selling the work of a graffiti artist required detaching the wall where it was drawn, even if the environment around the artwork was part of its meaning. This is the case with KIWIE’s work, where physical location is an incredibly important part of the Fat Monster’s appeal.

“Using NFTs to represent ownership allows to maintain the beauty of the art intact,” added KIWIE, the creator of Fat Monster. “Blockchain is not just a buzzword here, it legitimately enables something that used to be impossible.”

KIWIE plans to drop the first batch of 5 NFTs on April 13th via  Rarible. These will represent existing artworks, while the next four batches in upcoming months will be composed of new artworks made specifically for the NFTs.

Mashya Vyazemskaya, Head of Communications at Rarible said: “The NFT community has been figuring out meaningful ways to bridge physical and digital art. Kiwie 1001 is a smart, purposeful, and fun project by a fantastic street artist that does exactly that. We’re happy that the team chose Rarible for the launch!”

KIWIE is the name of a Latvian art collective led by the homonymous Kiwie, one of the first street artists in Latvia. KIWIE’s signature Fat Monster was born in 2005 and gained recognition worldwide for its cute design and unique artistic meaning. Kristaps Vaivods, a blockchain gaming industry veteran, leads the blockchain vision for the collective and is the mind behind its revolutionary NFT drops.