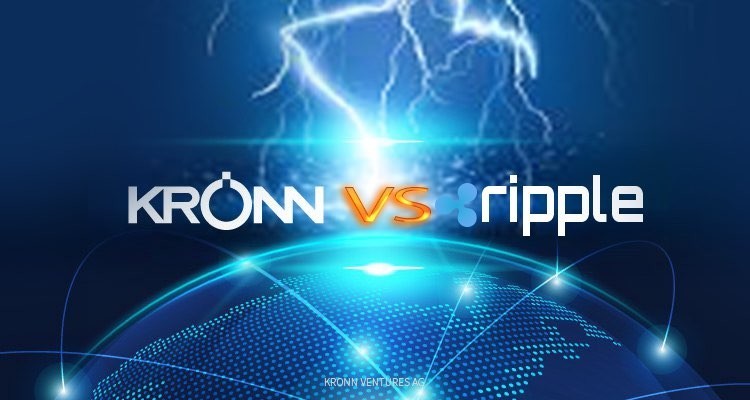 These days, when most people hear about cryptocurrency, the first thing they think of is the price of Bitcoin. It’s a notoriously volatile asset which has, over the last two years, seen extreme peaks and valleys in terms of value. At one point, crypto’s flagship digital asset flew as high as $20,000, which turned out to be a bit too close to the sun as it deflated throughout 2018 to its current levels around the $5,000 mark.
Such volatility might give the impression that cryptocurrency is only good for speculation, but that couldn’t be further from the truth. Nestled behind the headlines about price, bull and bear markets, and sensational stories about fortunes made and lost, is real blockchain development being lead by startups like KRONN Ventures AG and Ripple.
While the media focuses on superfluous aspects of cryptocurrency, blockchain is making inroads across every major industry in existence. However, of all blockchain’s applications, it’s best and most disruptive characteristics are perfectly suited to financial technology use cases such as forex remittances.
The forex remittance market is the first and most aptly suited market for blockchain technology to make its mark. Based on the SWIFT network, forex remittance markets depend on outdated technology that is quickly being rendered obsolete by the natural advances made by blockchain.
Because of the internet, the world has become a united digital landscape in which messages, music, video, and other forms of data can be shared from one country to another with only a moment’s delay.
Sending money, on the other hand, still takes at least three to five business days and is subject to redundant forex remittances fees every time the money is snagged by an intermediary. In some cases, remittances exchange hands three times or more as banks route the transfer through circuitous networks while searching for partner banking institutions to complete the exchange.
Banks and other remittance institutions haven’t let the efficiency, speed, and security of blockchain-based remittances go unnoticed. Two blockchain FinTech companies, KRONN and Ripple, have caught the bulk of attention given to the sector. The forex remittance market sees over $5 billion in daily trading volume, so it’s easy to understand how much is at stake for up-and-coming projects in the space.
As such, it’s fair to pit the two leading startups, KRONN and Ripple, against each other to see who comes out on top.
KRONN and Ripple – Who Comes Out On Top?
KRONN Ventures AG is a Swiss FinTech company that has recently made waves for developing the first mass-adoptable, elegantly designed app for easy money transfers worldwide. Ripple, by contrast, is an American tech company founded primarily as a gross settlement system. Over time, it’s grown to include a currency exchange and remittance network but, unlike KRONN, has no retail user-level app or interface. Herein lies the first major difference between the two. Ripple is aimed primarily at enterprises, whereas KRONN services both enterprises and everyday users.
Despite not having a dedicated service for everyday users, Ripple has created a high circulating supply of its native token, XRP-to the tune of 100 billion coins. The strategy in circulating such a large amount of coins is to raise capital for Ripple Labs by having partner banks buy into the token, only for Ripple to subsequently sell its XRP holdings at higher prices. This has caused banks a great deal of second-guessing in their negotiations with Ripple, and to a large extent explains why many of the banking partnerships they’ve to establish, are partial at best.
Understanding the misstep of such a tactic, KRONN has issued only 980 million coins-all without holding an ICO to raise funds. The KRONN team has developed its mainnet to completion and is currently undergoing beta tests without having raised a single cent from the public.
Whereas Ripple is seeking adoption from enterprise-level organizations only, KRONN has made it clear from the outset that its main goal is to commercialize the use of blockchain technology and the expenditure of cryptocurrency on a global, mass-adoption scale. Rusy Jung, CMO of KRONN Ventures AG, announced that after going public with strategic listings on internationally recognized exchanges Bitsonic and Bitforex, KRONN has lined up listings on virtually all major exchanges for 2019.
On April 10th, KREX [KRONN’s native token] will kick-off its major exchange debut with a listing on Coineal, one of the top ten highest volume exchanges in the world. Exchanges are eager to list and strategically partner with KRONN owing to the fact that KRONN’s technology enables the swift and simple conversion of crypto to fiat currency without going through a bank.
Put simply – Ripple is a settlement system trying to replace SWIFT, whereas KRONN is becoming the de facto currency exchange network for crypto markets and is capturing global audiences with its international money transfer app. While each company has its place, the market may find favor with KREX because of it’s much lower circulating supply [1/100th of XRP’s circulating total], broader aims, and promising partnerships.
Author: Cosimo Piovasco
About the Author
Cosimo is a long time blockchain believer, advocate, and consultant. Having worked with several top 100 cryptocurrency projects, Cosimo has seen first-hand how disruptive the nascent technology is, and how well that bodes for the future of the industry.
Commentary Opinion
Ripple has been mired in controversy for a long time regarding its practices surrounding high XRP circulation. Banks are wary about buying into the XRP currency which they deem unnecessary and beneficial only to Ripple Labs. KRONN’s lower circulating supply, populist aim, and plan to rapid mainstream adoption put it in a prime position to compete within Ripple’s market and it’s own. With KREX going live on global mainstream exchanges, the partnerships are starting to roll in as promised by the team.

Risk Warning from AOFEX: Are certain altcoin worth investing?