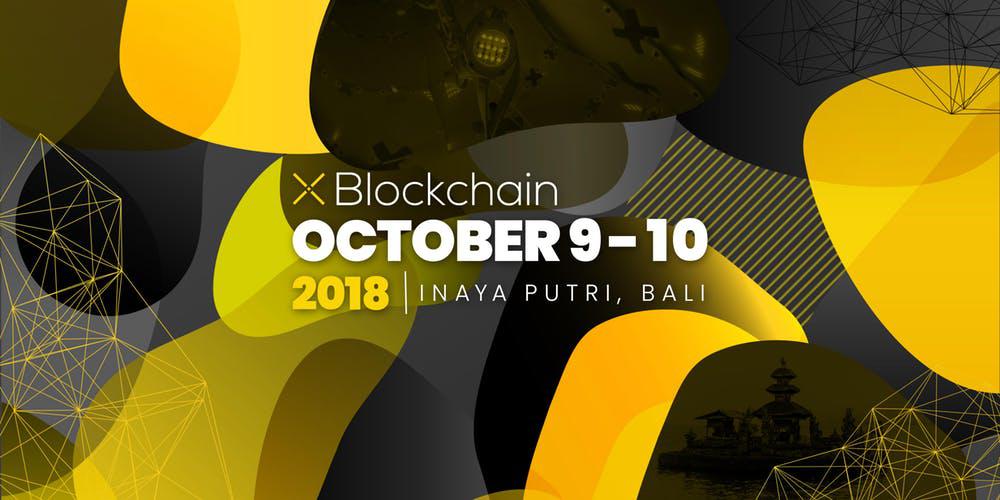 Leaders in tech, government and business are gathering in Bali for XBlockchain summit held in parallel to the 2018 annual meetings of the IMF and World Bank Group
BALI, Indonesia, September 14th – Leaders in blockchain technology are only three weeks away from assembling in Nusa Dua, Bali for Asia’s pre-eminent summit on blockchain technology promising to change traditional industries and forge new ones, in the same week as the annual meetings of IMF and World Bank also this year in Bali.
This summit is being organized jointly by the Indonesian Blockchain Association (ABI) and XBlockchain. It will cover similar themes, such as international wealth transfers and financial inclusion to the IMF-WBG but it will be devoted to exploring real-world instances of the application of blockchain, which has been heralded with so much potential.
The XBlockchain Summit 2018 which takes place on October 9-10, the same week and place as this year’s IMF-WBG annual meetings, will host debates with global leaders from the United Nations, IBM, Deloitte, Stellar, Pundi X, and leading blockchain representatives and experts from various Asian industries, countries and government.
Global leaders will speak to topics spanning every use of blockchain healthcare, financial inclusion, supply chain management, high finance, music, gaming and much more.
The Minister of Finance for Lithuania, Vilius Šapoka will share his views on how forward-thinking and friendly regulation in addition to suitable infrastructure can accelerate the adoption of blockchain technology for progressive nations and provide the view on regulation from the European Union.
Speakers of the summit will include Susan Oh of United Nations’ Blockchain for Impact, Inge Halim of IBM’s Indonesia, Paul Sin of Deloitte’s Asia Pacific Blockchain Lab, Chia Hock Lai of the Singapore Fintech Association and many more from USA, Europe, Australia and Asia region.
Stellar’s founder McCaleb will cover the future adoption of blockchain technology, and how his establishment of new global infrastructure for cross-border transfers allowed him to reach the general public. Pundi X CEO and Co-founder Zac Cheah will reveal the next generation of blockchain technology for real world implementation.
Entrepreneur-turned-legislator Jason Hsu of Taiwan will talk about The State of the Digital Economy, Blockchain, and Regulations as he draws from an extensive background in policymaking, having authored such laws as the Fintech Sandbox Act and Angel Investment Law. Hon. Dharmendar Sesungkur, Minister of Financial Services and Good Governance, Republic of Mauritius, will also address his work in making Mauritius a global blockchain centre.
Networking sessions will take place during the 2-day summit including an invite-only exclusive high-level meeting taking place as well called Blockchain on the Yacht atop the Bali sea.
Steven Suhadi, Chairman of Asosiasi Blockchain Indonesia says:

“Just weeks out we are thrilled to announce that we will be having global speakers, exhibitors and high-level discussion sessions during the summit. The Summit has indeed become one of the most anticipated events in the realm of digital technology not just in Indonesia, but in the Asian region as well,”

With slots quickly filling up, those interested to join the Summit are encouraged to purchase their passes as soon as possible. Ranging from $150 to $250, participants will get access to the Main Conference, Business Matchmaking Tools, XBlockchain Awards & Party, XBlockchain Lounge, and Exclusive Access to the XBlockchain Leader’s Dinner.
About Xblockchain
In its inaugural year, XBlockchain is committed to building the region’s most influential platform for blockchain innovators. With our extensive network of international and domestic partners, XBlockchain promotes communication and collaboration, and provides an open innovation platform to connect enterprising individuals, developers, startups, established organizations, government agencies and investors who seek to foster a spirit of positive disruption in the field of blockchain.
XBlockchain creates the blockchain industry’s flagship event – the XBlockchain Summit, which is a global, top-level, private, invitation-only network for attendees spanning blockchain innovators and representatives from different industries and government.
XBlockchain seeks to highlight the positive developments being made by the blockchain industry and believes that technology can enhance the traditional order and make it more effective and efficient.

Why the Travel Industry Needs the Blockchain