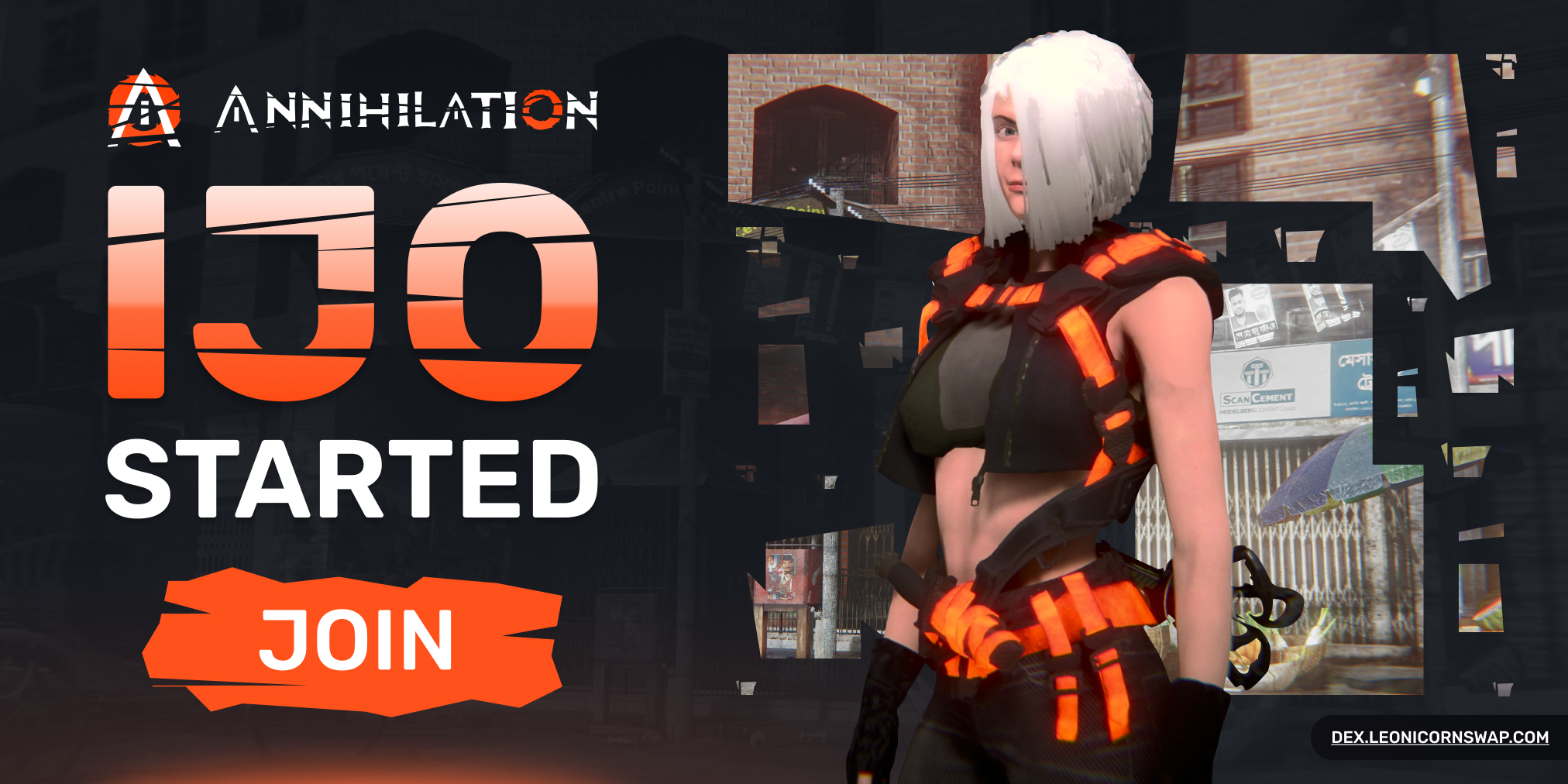 Leonicorn Swap is an up-and-coming dual token DEX platform built on the Binance Smart Chain, which, through advanced features, unparalleled dedication to security, and an ambitious roadmap is set to explode onto the DeFi scene in 2022. Over the next few months, Leonicorn Swap will start releasing many exciting new features, such as a multi-chain NFT Marketplace, Prediction Markets, and its Initial Jungle Offering (IJO) launchpad. On the 14th of January, Leonicorn Swap will launch the first of these features: the IJO launchpad platform.

The partner project chosen for this inaugural IJO is Annihilation, from Crisis Entertainment, an innovative play-to-earn multiplayer 5 vs 5, sixty player, battle royale shooter game (similar to the famous Fortnite), which is set to become a play-to-earn multiplatform game in the future update. Annihilation will feature its own internal economy in which the Annihilation token (ANCE) will be used as the in-game currency for the purchase of skins, weapons, player traits, and NFTs, with users taking full ownership of their in-game assets.

Initially available as a mobile game on the Android platform, the Annihilation team has a detailed roadmap in place which includes playable NFTs, blockchain integration, and desktop platform launches over the course of the next few months. Full details, as well as the roadmap and whitepaper, can be found on their website at https://annihilationmobile.com. The IJO will take place on the Leonicorn Swap Dex platform, using a simple ‘stake for allocation’ model.

To receive an allocation, users must first buy and then stake the Leonicorn Swap native DEX token, LEON. Once purchased, the LEON tokens must be locked within the DEX’s Locked Staking function for a minimum of 30 days, during which time they will earn rewards in the form of additional LEON tokens, released to the user at the end of the locking period. Once locked, users will be eligible to commit BUSD, equal to the value of their locked LEON tokens, with which to purchase ANCE tokens.

The IJO offers users a choice of a Basic Sale or an Unlimited Sale that runs concurrently. The IJO tokens will be divided between the basic and unlimited sales with 20% and 80% assigned to each sale respectively. The Basic Sale is designed to offer smaller investors a fair opportunity to compete for an allocation, though users are free to enter both sales if they wish. After the sales are completed users will receive their share of the IJO tokens, together with any unused BUSD.

The Basic Sale is limited to $100 worth of BUSD but is free from any participation fees. The Unlimited Sale allows users to commit any value of BUSD, up to the value of their locked LEON tokens but is subject to a participation fee. On completion of the Annihilation IJO, ANCE holders will find exciting investment opportunities available on Leonicorn Swap, such as farming pools.

Shortly after completion of the first IJO, the next IJO project will be launched, and users who still have LEON tokens locked will remain eligible to commit their BUSD in this IJO also.

The Annihilation IJO (ANCE) is now live on https://dex.leonicornswap.com.

Leonicorn Swap is developing apace and is also poised to launch its multi-chain predictions market, a true industry first, where users will be able to partake in exciting fast-paced price prediction markets to win prizes. Initially, markets will open for BNB, ETH, and MATIC (Polygon), but Leonicorn Swap will not rest there, with expansion into other markets following in due course.

Predictions consist of a game where users test their analytical powers and pit themselves against each other, by predicting whether the price of their chosen currency will rise or fall, over the course of a five-minute window. If predicted correctly the player wins a prize, paid out in the form of that currency.

With so many new features and offerings, on the horizon from Leonicorn Swap, there is an opportunity to become part of something truly magnificent, a chance to join an imaginative, ambitious, exciting protocol with plans for expansion into multi-chain and cross-chain, and metaverse functionality. We look forward to watching this sleeping giant grow to its full potential.

Annihilation beta can be downloaded at:

Tory Lanez is releasing his NFT collection with Decentar Labs