Litecoin has been trading at a discount from its previous ATH just like many other cryptocurrencies. However, LTC’s latest performance puts it in oversold territory especially now that it has dipped its toes below $100 once again.

Litecoin traded at $389 at its peak in May 2021 and has not managed to rally back to those levels since then. It traded at $98 at the time of this press, courtesy of a strong bearish start. Its current price is discounted by roughly 77% from its ATH, meaning it is severely sold off. LTC’s latest selloff pushed it closer to its 2022 low at $90.

Will Litecoin bounce back near its current level?

The price bounced back significantly the last time it went to $90 in February this year. A similar outcome was observed in January when the price dipped below $100. This suggests that it might be encountering structural support around $90. A bullish breakout within the same level is probable, especially considering its heavy discount. 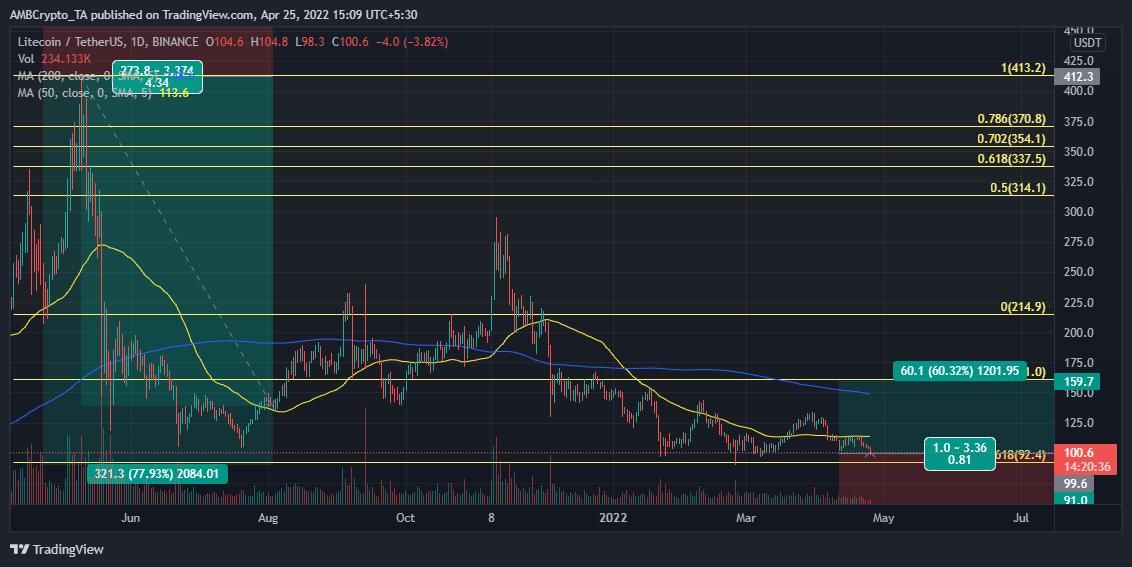 Litecoin’s rally in March resulted in a healthy uptrend that broke out of its descending range which it had been locked in since December. Its April performance has erased those gains but the rally did highlight strong momentum during a bull market.

On-chain metrics may provide useful insights into whether LTC has been experiencing accumulation. Its Whale transaction count metric highlights increased activity from 5 April to 21 April.

This is around the same price that the price experienced a significant market correction to the downside, suggesting increased distribution. It also coincides with LTC’s MVRV ratio which reveals a dip in realized profit relative to the market value.

The whale transaction count indicates decreased activity in the last 3 days. Another uptick in the next few days is something to watch out for because it might point to an accumulation wave at lower price levels. Such an outcome would result in significant upside for Litecoin especially if the global crypto market cap experiences an uptick.

Dogecoin: Recovery may be on the cards for DOGE thanks to these factors