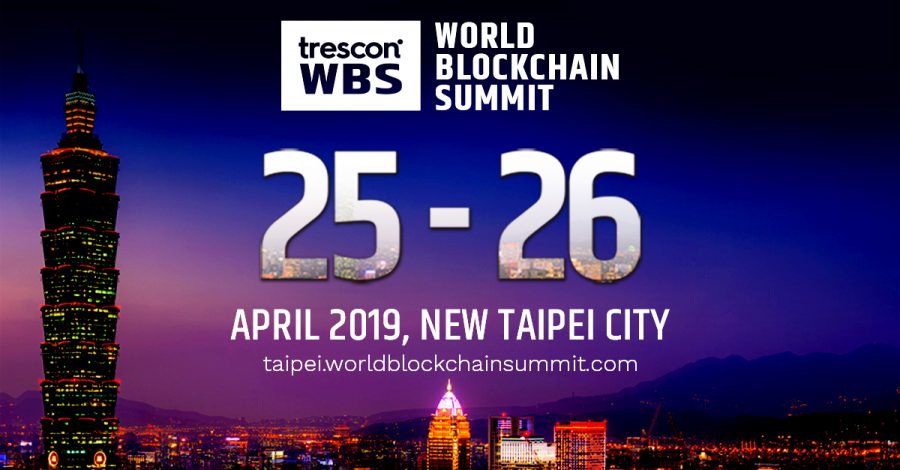 World Blockchain Summit [WBS] is making a historic foray into Taiwan and the Mayor of New Taipei City,Hou Yu-Ih, will be addressing the state’s progress on blockchain and crypto adoption. Other stalwarts speaking at the summit include Roger Ver, Tim Draper and The Godfather of VOIP, Alex Mashinsky, to name a few.
Since the establishment of the first local government-led incubation center InnoSquare in 2014 and first seed accelerator, Taiwan Accelerator [TA] in 2016, the Taiwanese government has been doubling its efforts to actively support initiatives that can enhance the entrepreneurial ecosystem in the country.
In order to connect and combine the support of enterprises, business incubators, startups, governments, investors and policy-makers, the New Taipei City Government will endorse the world’s biggest blockchain summit series, World Blockchain Summit taking place on 25th and 26th of April 2019, at the Hilton Taipei Sinban in New Taipei City. The summit is being organised by international business events and consulting firm Trescon.
The summit is conceptualized to assess the Taiwanese blockchain ecosystem from a regulation and implementation standpoint. The 2-day summit will be a melting pot of some of the greatest pioneers in the crypto and blockchain community such as:
Roger Ver, CEO of Bitcoin.com
Jason Hsu, Crypto Congressman
Ted Lin, Chief Growth Officer at Binance
Hou Yu-Ih, Mayor of New Taipei City
This will be the Mayor’s first blockchain based tech event since his incumbency where he will give his outlook on the groundbreaking technology and the plan focusing on making New Taipei City the blockchain powerhouse of the world. Among other key highlights, the summit will also feature a keynote from the Founder and CEO of Celsius Network, Alex Mashinsky on how to bring 100 million users onto the blockchain.
Alvin Chua, president of The Institute of Blockchain, Singapore, said,
“Blockchain education and adoption is an ongoing process and World Blockchain Summit is a good avenue for us to get together and learn from one another. Be it from the academia, regulator, developer or business perspective. The proliferation of blockchain technology starts from you and me.”
Mohammed Saleem, Organiser of World Blockchain Summit and CEO of Trescon, said in an interview that,
“After successful editions in the APAC region covering Singapore, India and Kuala Lumpur, we were exploring new territories and that brought us to Taiwan, which is at the fore-front of blockchain implementation. I am hopeful that this collaborative effort with the New Taipei City government will benefit the businesses and blockchain enthusiasts in the region.”
Sponsors and partners of the summit include:
NOD3, Bitcoin.com, Oryx, Naoris, ACO, Cryptzo, icte.io, Security Token Partners, Aptorum, Aenco, Nexxo, Profitoak, Bloomyt, Influbook, MyTVchain, Cybavo, Zoreum.com, and HexBean.
About Trescon:
Trescon is a global business events and consulting firm specialised in producing highly focused B2B events that connect businesses with opportunities through conferences, road shows, expos, investor connect and consulting services.
For further details about the announcement, please contact:
Rahul Harindra
PR and Media Relations Executive
Tel: +91 080 4611 3911

What is USDQ and Q DAO?