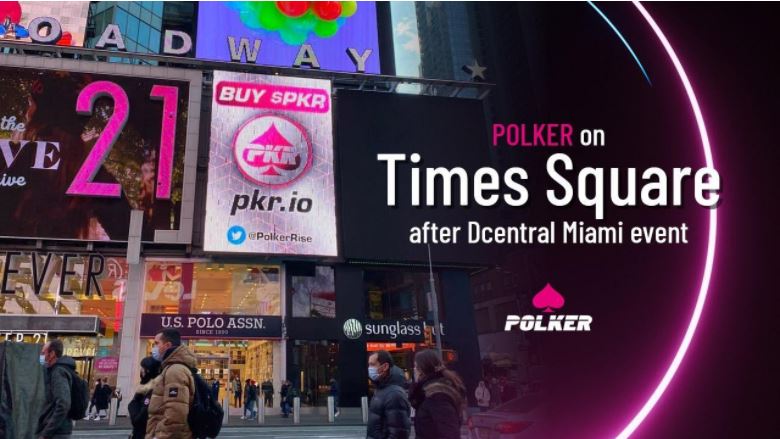 A major milestone for Polker

The two-day blockchain event from November 30th – December 1st provided Polker with a great opportunity to connect to a broader crypto audience. As a result, Polker was able to stand out among the crowd in the event that featured key crypto stakeholders like Joseph Lubin of ConsenSys, Peng Zhong of Tendermint and BitBoy.

The event provided a stage for blockchain projects in the NFT, DeFi and metaverse sectors to showcase their applications and use-cases. Polker promoted its ecosystem and displayed its NFTs in the NFT gallery to rave reviews from attendants.

The Polker team also successfully met key partners like Polygon and discussed ways to expand its existing ecosystem by leveraging new technologies. It also met with Bitboy, one of the biggest crypto influencers and crypto publication Altcoin Daily.

Polker was able to attract massive attention in the aftermath of Dcentral Miami as a Fan placed a billboard about the project in Times Square, New York. Times Square is a major commercial intersection, tourist destination and entertainment centre in the US and placing a billboard of Polker shows the level of trust the community has in the project.

This is not surprising since the Polker team has made massive strides in releasing products within its ecosystem. For example, it recently launched the Beta round 2 phase of its gaming metaverse on November 27, which included more updates for gamers.

The Polker game is an innovative metaverse where users can play poker with realistic graphics powered by the Unreal 3D Engine 4. This robust architecture enables Polker to provide an ultra-realistic setting for gamers using virtual reality combined with the Play-to-Earn model.

Players can also receive NFTs rewards for gaming on Polker. Each NFT is unique and has different features that unlock special new deals, exclusive tournaments and more.

The Polker ecosystem continues to grow and the team has announced that the Beta 3 launch of its gaming platform will go live from December 11. This upgrade is a major one and will include the introduction of NFTs to the gaming metaverse for the first time.

Polker has also revealed that it is migrating its protocol to Binance Smart Chain to expand its gaming metaverse from Polygon to one of the biggest blockchain ecosystems.

Polker is a blockchain gaming metaverse that deploys the play-to-earn model where users can earn while gaming. It is powered by its native token PKR, which is multichain and available on Ethereum and Binance Smart Chain. Holders can also stake PKR tokens on the Ethereum mainnet for up to 36% APY in rewards. Polker has already noted that staking capabilities will be added to Binance Smart Chain before the end of 2021.

Investors can purchase PKR at Uniswap on the Ethereum network and PancakeSwap within Binance Smart Chain. In addition, PKR has also been listed on the centralized crypto exchange BitMart and Bittrex with rumours of much larger exchanges to come very soon.

Secret Society: The mafia NFT collection is armored up and ready to go