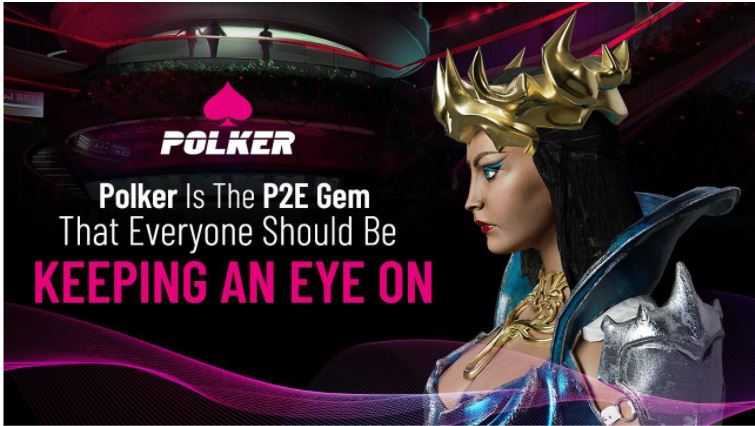 As per the latest developments, Polker shall be releasing an early access version for 500 individuals before the full release. Every participant will get a limited edition ‘Beta’ NFT (500 only). The debut will take place on March 14th, 2022, with users able to play until the complete launch.

Anyone interested were required to register themselves first, and the main launch will take place in Q1 of 2022, according to the official roadmap. Polker will also be in attendance at the NFT L.A. event, which will be held from March 28th through March 31st. Finally, the results shall be announced via email and an NFT sale shall commence soon as well.

What’s so special about Polker?

As a result of the rapid expansion of the metaverse and P2E games these days, identifying which projects are worthwhile to invest in may indeed be quite difficult. Secondly, because the NFT and P2E sector is still relatively new in terms of mainstream adoption, players from all over the planet are actively seeking a game that satisfies all of their needs while being simple to learn, which is exactly what Polker seeks to give.

Few other games in this genre can compete with Polker’s high-end aesthetics because it is built using Unreal Engine 4. Polker wishes to distinguish himself in an area where excellent visuals are quickly becoming a must.

Polker also aims to take advantage of the growing worldwide interest in NFTs, therefore its P2E feature pays special attention to acquiring non-fungible tokens to increase game immersion and create a fascinating and dynamic metaverse. This allows players to not only have finances while playing the game but also to engage in the NFT sector and earn money.

Does Polker have any partnerships? What about future goals?

Polker has secured a notable collaboration for its NFTs with Polygon. Apart from Polygon, partnerships have been developed with Master Ventures, BSCPad, Chainlink, Bondly, and Unreal Engine.

In terms of previous successes, the Polker team has successfully finished four beta projects, acted exactly according to the roadmap, is presently in the final phases of production, and even received a shout-out from international celebrity and musician Akon. With respect to the future objectives, the team will concentrate on the complete launch, VR, and mobile development.

Polker is the first blockchain-based, play-to-earn, and free-to-play poker NFT that employs Unreal Engine 4 to offer a fully immersive and memorable gaming experience. It relies on a verifiably fair system and TRNG technology.

Polker intends to debut on all kinds of reputable platforms, as well as multiple streaming channels, with next-generation VR capabilities and exceptional 3D characters, aesthetics, and digital settings. Polker intends to be the industry’s first completely free-to-play and earn-to-play blockchain NFT game with metaverse capabilities. Visit the official website, as well as the Telegram, and Twitter channels, for additional information and frequent updates.