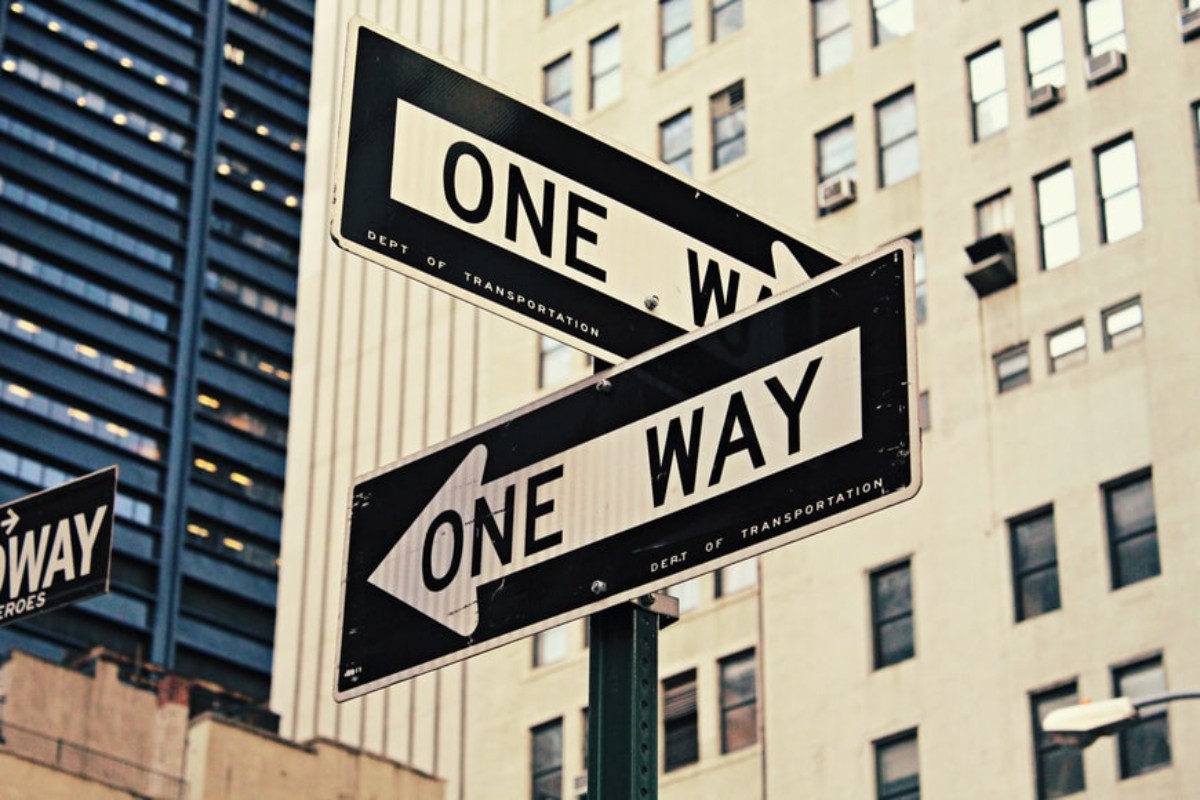 Over the past day, along with other altcoins, LRC too spiked on its price chart. Now, even though it inched by more than 10% on the daily window, it shouldn’t be forgotten that the alt lost almost the same value in the weekly window.

Time to expect a setback?

LRC’s recent rally has been quite phenomenal. From 27 October to 10 November, it appreciated by close to 1000%. But, in the week that followed, the alt lost 40% of its value. However, the long-green candle registered on 19 November managed to flip the narrative back to bullish. 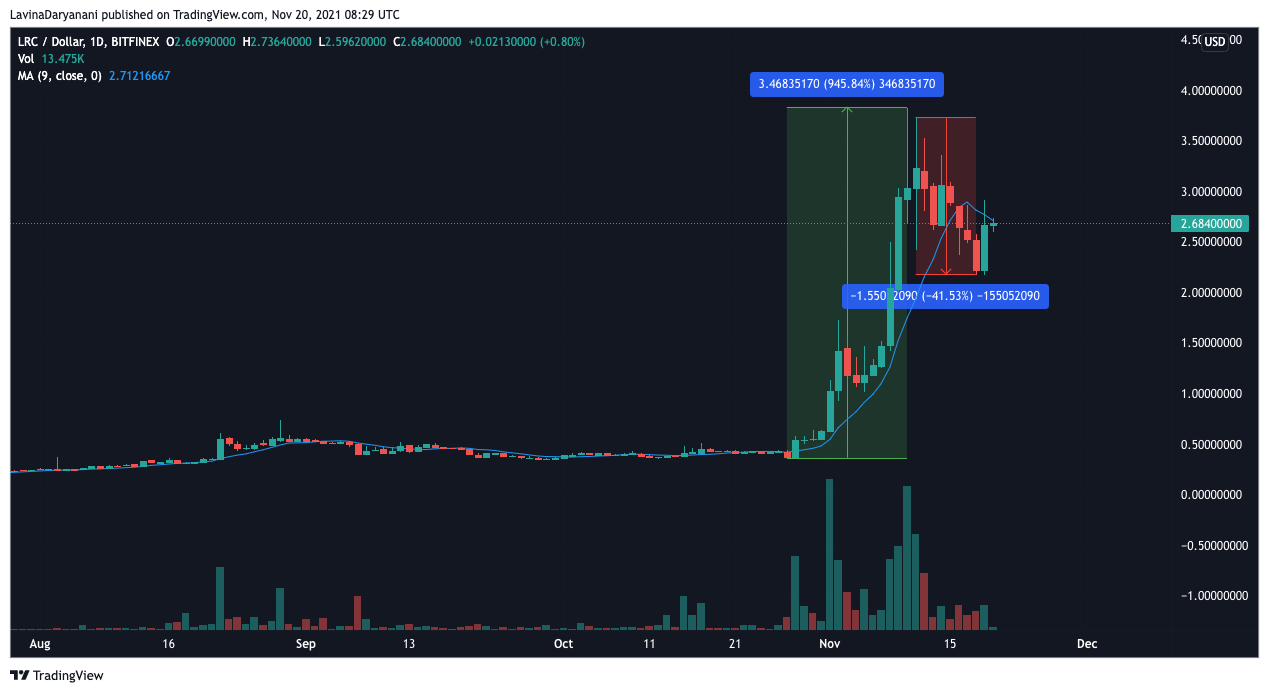 Amidst the short-term bullish-bearish flippening, LRC’s future course of action remains vague. Thus, looking at the metrics at this point would give an insight into LRC’s trajectory in the coming days.

Consider this- the Price DAA Divergence. This model gauges the relationship between the coin’s price and the number of daily active addresses interacting with it.

Now, as can be seen in the chart attached below, it becomes quite clear that the bearishness has only intensified over the past few days. This isn’t really a good sign and brings to light the non-healthy state of the network activity besides the daily active addresses.

For any alt’s rally to be organic, it is quite essential for this metric to project bullish streaks on its chart. But, looking at the metric’s projections for LRC, it can be said that it would be difficult for this alt to keep up with its uptrend phase. 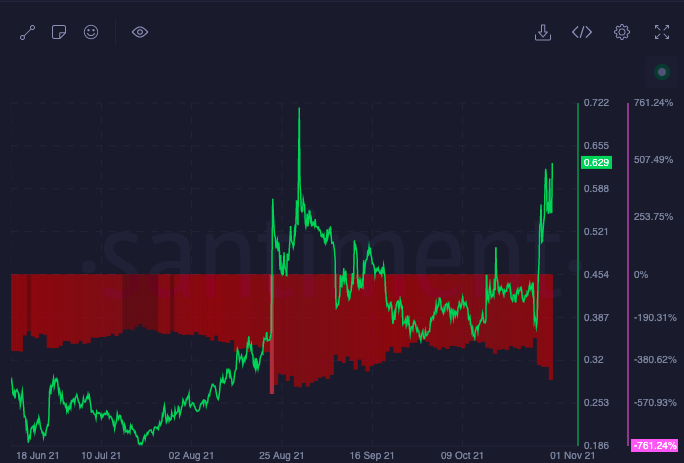 Further, both the mean-coin age and the mean-dollar invested age have registered free falls of late. As the average age of the dollars invested in LRC becomes younger, it can be argued that dormant tokens have started moving. And HODLers, especially the ones in profit, have started selling.

Well, if both these curves continue to head southward from here, it would mark the beginning of LRC’s complacent run. In effect, we wouldn’t see the coin rally much. 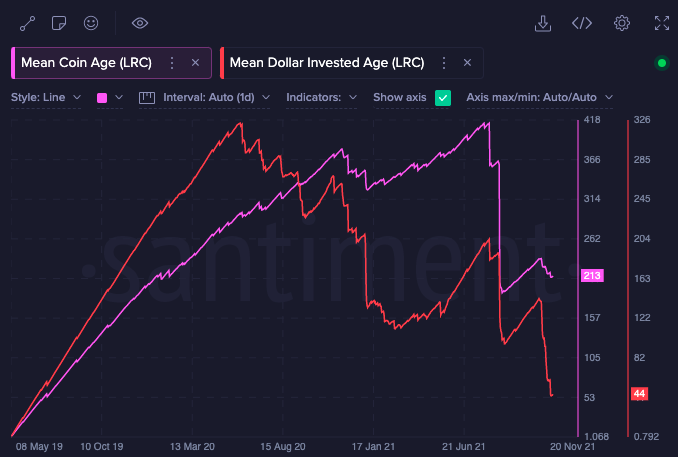 The presence of selling bias in the LRC market was further confirmed by the drop in the average balance. On 11 November, the average balance of an LRC HODLer reflected a value of $48.4k. However, the same, at the time of this analysis, was seen revolving in the $30k bracket.

The supply on exchanges has also started increasing, implying that HODLers have indeed started abandoning their LRC tokens at this stage. 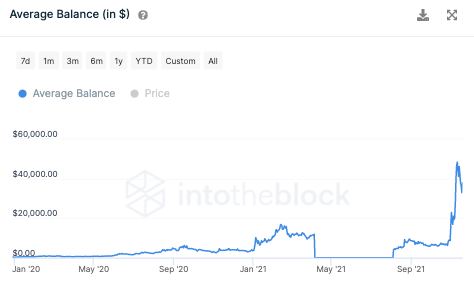 The aforementioned trends, by and large, aren’t very appealing and do not advocate the rise in price narrative. Thus, it wouldn’t be a surprise if LRC dips in value in the coming days.