With its fifth edition of SIGEF, which was staged for the first time in Asia/Singapore, Horyou aimed high and took its participants right where technology pledges inclusion and sustainability. 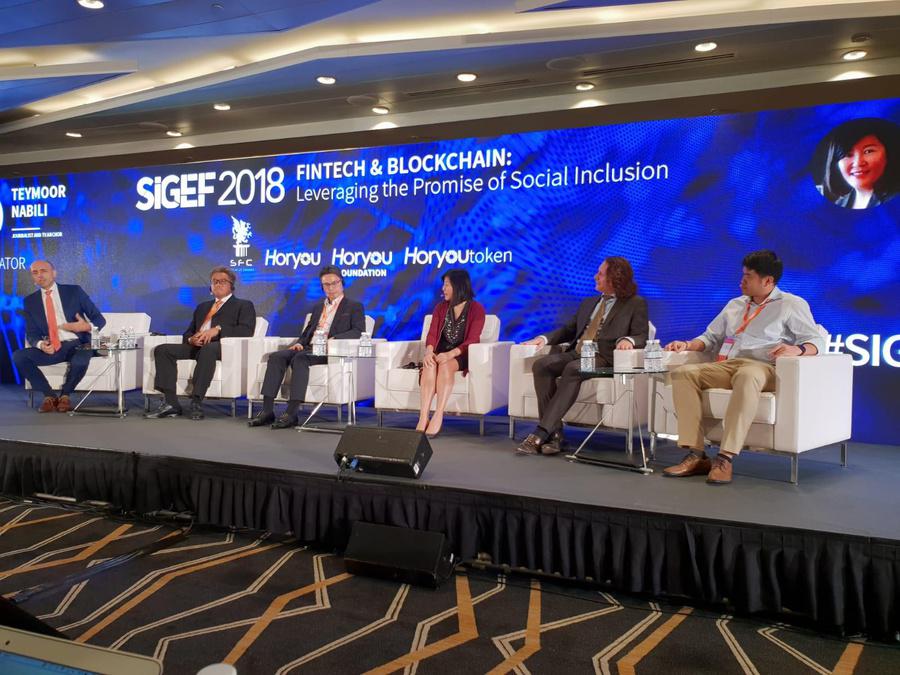 From its opening remarks through to its closing speeches, with   keynotes and panels tackling sensitive yet most relevant themes and   topics such as urban sustainability, Fintech and blockchain with a purpose, Sustainable Development Goals (SDG), Gender equality, MedTech for inclusive care, social  impact with financial returns, and clean and synchronized future energy, SIGEF2018 was set to serve as the model forum that Millenials have been requiring for years:  a practical, positive and feasible solution geared gathering of investors, civil servants,  researchers, experts, civil society activists, philanthropists, NGOs and academics sharing experiences, advice and proposals, all bound to lead to a more globally beyond frontier sustainable and inclusive future  for all.
Fabrice Filliez, the Swiss Ambassador to Singapore, did the opening at the Suntec Convention  Centre, insisting on “Swiss and Singapore commonalities promoting peace and security through dialogue”. This message, clearly,  was not meant to stop at bilateral relations but be understood as the condition of possibility of global sustainability and inclusion. Building on the example of Horyou, the social network for social good, Mr. Filliez reminded the two-­‐hundred-­‐and-­‐fifty-­‐participant  floor of the role of Switzerland in promoting peace and dialogue through hosting the headquarters of major global institutions whose role and actions are precisely aimed at Shaping Better Times to Come, which was the theme of the Forum.
Filliez was followed by Kazuhiro Hisata, serial entrepreneur, marketing expert, angel investor and a Blockchain evangelist, Founder of SRS Fintech Commerce Ltd. Which sponsored the event, reminded the audience that likeminded differences are assets when sharing the same goals. Tackling the particular issue of blockchain and cryptocurrencies and the fears that, in some circles, they may induce, Mr. Hisata insisted that “Money can exist without form or shape; it is a good service and is more usable to change the world“. In that regard, and stemming inspiration from HoryouToken, he affirmed that each one can spread the ideals of Horyou. 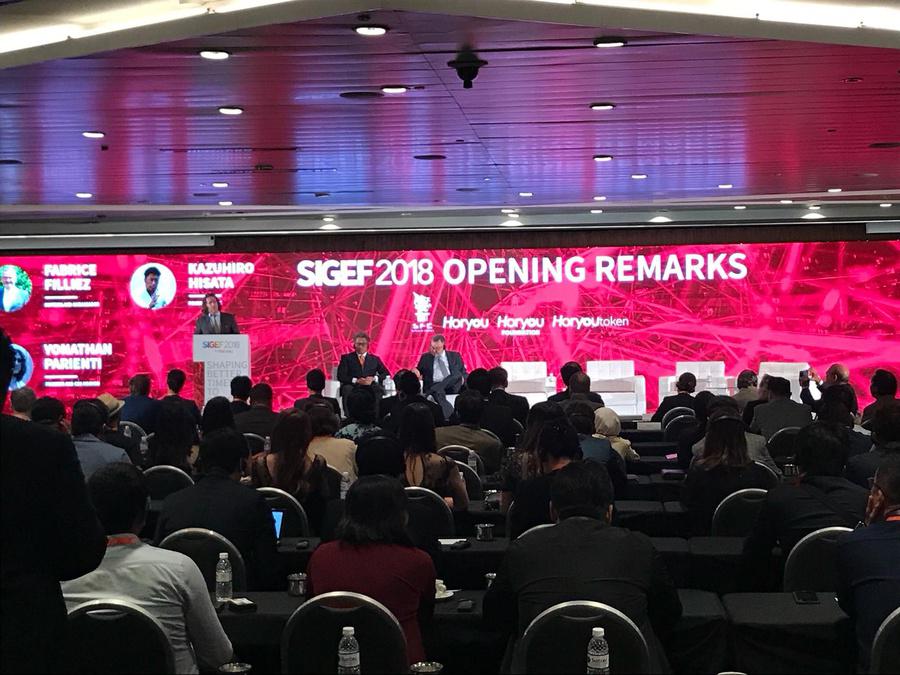 Coming next, Yonathan Parienti, founder and CEO of Horyou, the organizer of the Forum, restated the objective of SIGEF2018 as a milestone on the road to “leverage technology to induce inclusion and sustainability”. Insisting on the need to find solutions he urged the participants to show more implication: “Don’t be shy, connect and share; be concrete   and your dream – our dream -­‐ will turn to reality.”
First pitch on urban sustainability, Natalie Doran, Digital Marketing Director of Timetech, a blockchain-­‐based time exchange project, put forth the importance of global timesharing as key to a more inclusive world. She was followed by Kavita Sinha, from Silver Spring Networks and founder of an NGO that caters for children with hearing disabilities,   cited the example of her own son who, thanks to a chip implanted in his brain, “is now like just another kid”, to underscore the importance of technology for inclusion.
Also  on that  panel, Andy  Sim, a philanthropist  involved in digital innovations  that make giving “simple, meaningful  and fun for everyone”, talked about his  pursuit of ways to “go beyond smart to avoid  being less human”, and advocated the need to “create  solutions before technology and to always seek the meaning  of life while accruing our means to live.” He was succeeded by Damian Tan, Managing Director of Vickers Venture Partners and long time IT specialist, who is actively involved in the project of  “everyone being able to choose the kind of city they would like to live in”. Commenting on the best ways to mix philanthropy with profit, he asserted that the solution is to “always look for impact.” 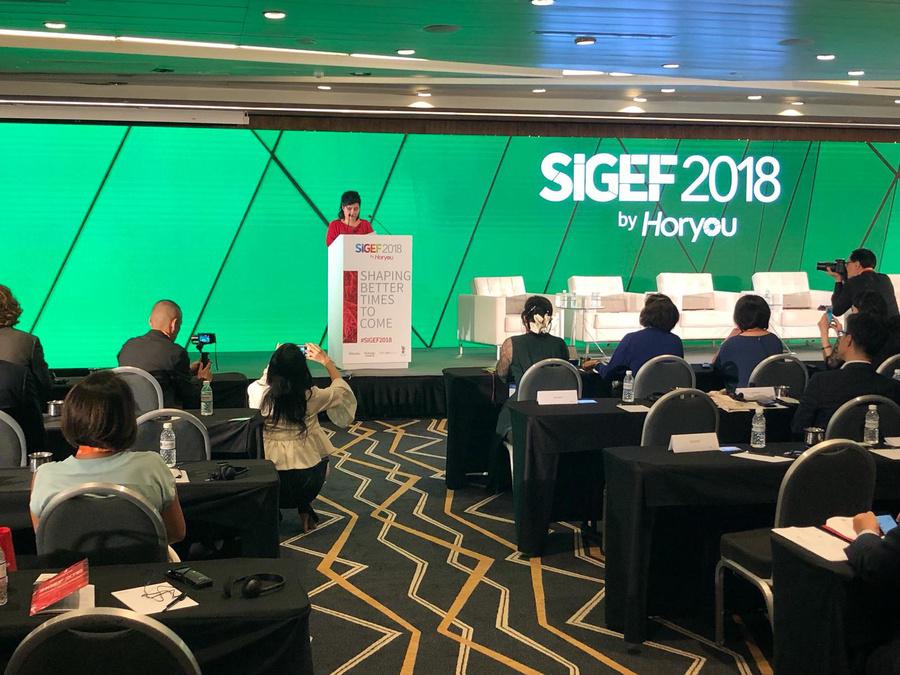 Thuc Vu, co-­‐founder and  CEO of OhmniLabs’, and a robotics, Artificial Intelligence and algorithms expert, advocated  getting over a sense of fear regarding robots and AI, for which end he designed and set  up a special open innovation platform that calls on collaborations to make robotics more accessible  and human friendly and turn them into real facilitators of inclusion. He was followed by Jan Ondrus,   Associate Professor at ESSEC Asia Pacific and director of research at the Center for digital excellence in business, who underscored the digital divide but only to propose way to bridge the gap. “We are not equal in terms of access to technology”, reason why his current interests cover digital business models and innovation, digital platforms and ecosystems strategy, mobile payment and Fintech, and strategy of IT, to get over the divide.
The second session, dedicated to Fintech and blockchain, allowed for a second keynote contribution from Kazuhiro Hisata who described the ways Fintech and   Blockchain technology are changing the world & lifestyles. “It is good service”, he asserted, insisting on “the opportunity that it offers to revolutionize humanity”. Also, keynote speaker for that session, Yonathan Parienti insisted on the difficulty to get funding for all workers   for social good but only to unveil effective ways to “make social good doers visible and sustainable, and help them expand.” “Everyone can be a force for good, everyone can share inspiration and be an agent of change” he added, before introducing HoryouToken, a cryptocurrency  based on a Blockchain with a purpose, that “is not about speculation but about a cryptocurrency with real value for society that supports constructive  initiatives aimed at promoting sustainability and inclusion.”
On the panel, Karen New, an ICO advisor and author of the first book on cryptocurrency, explicated ways of bridging “the gap in understanding technology of cryptocurrency in the general population”, a major obstacle hindering its going mainstream. She confirmed that   “regulations are coming into space that will stabilize the market in terms of investment and speculation” while admitting that “there’s always a risk because it  takes time -­‐ easily a year or two.” Going in the same direction of how to turn cryptocurrency into mainstream substitute money, Kenneth Bok, director of Singapore-­‐based   Blocks, insisted that, beyond the issue of speculation, it is “important to talk about money and how the role of money is changing; talk about who issues and controls money, and how   to be smart with fiat money”. Convinced that “decentralization will allow local communities to come together”, because “Blockchain is not just about money but about information.” 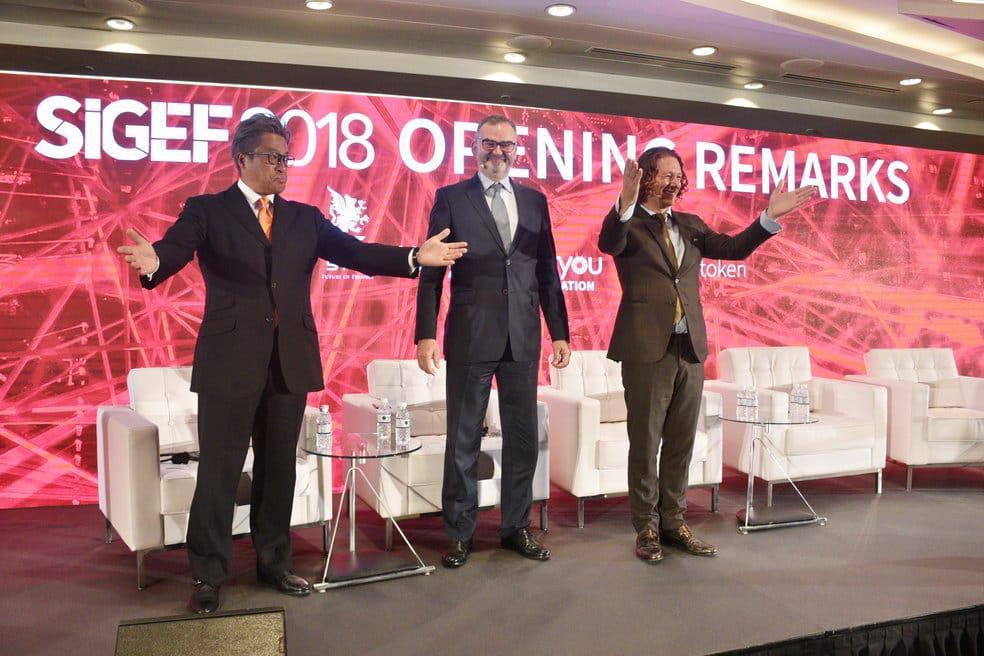 Chan Sik Ahn, a legal advisor and partner at HMP Law, explored the tricky ground of legal vs. illegal technology, reminding us of how we sometimes promote and sometimes prohibit technology.  Reviewing ways of reconciling law and technology, which aims at the protection of the general public “because Blockchain has the same impact as the Internet”, he insisted on the importance of transparency and the need to make a  difference among the many players that are coming up. “You have to look into them and find out about their project”, he advised.
Moving into SIGEF’s session  3 dedicated to the UN Sustainable Development Goals and how to help a quick implementation of their main dispositions, which was complemented with a panel on gender equality, was the occasion  for keynote speaker Myriam Feiler, co-­‐founder of bizzi.co, a collaboration   platform for the world’s small business owners whose goal is to “enable collaborations  that solve the world’s greatest challenges”. To that end, Miriam was looking to meet with individuals and organizations that are addressing the SDGs, as well as those that are committed to helping small businesses overcome their challenges to growth.
On the SDG panel was Mikkel Larsen, managing director at DBS, who assigned himself the mission to strengthen his bank’s sustainability agenda in various ways. In July  2017, for instance, DBS was the first financial institution in Singapore to issue a green bond to support the financing of green assets. “What does a bank to do with sustainability? Seek impact in all SDG areas, including gender equality.” “Money  is at the core of everything”, he reminded candidly and “we look into a mix of social and environmental issues and we see the  SDGs as investment opportunities.” 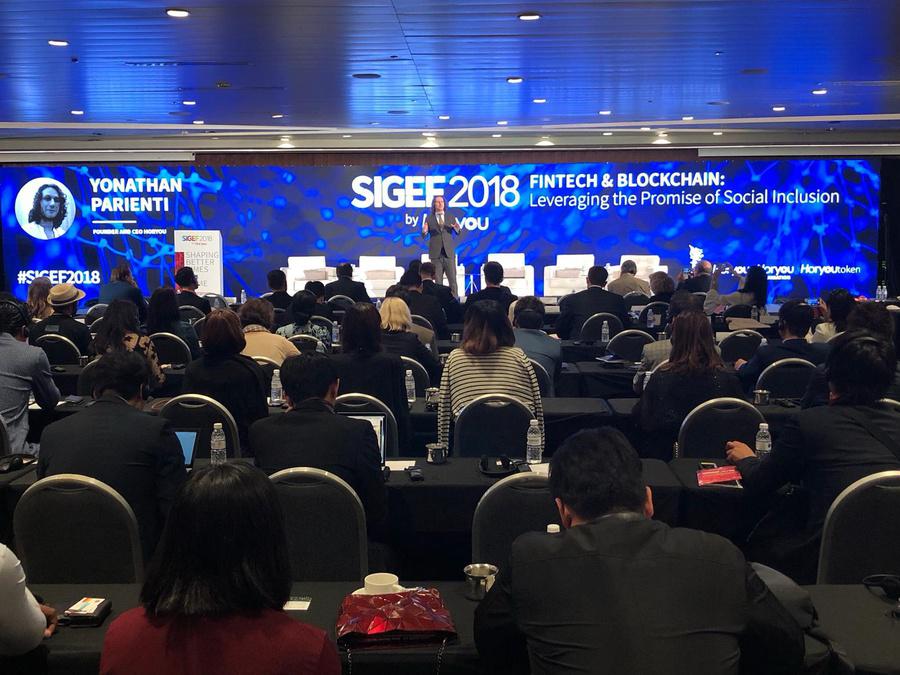 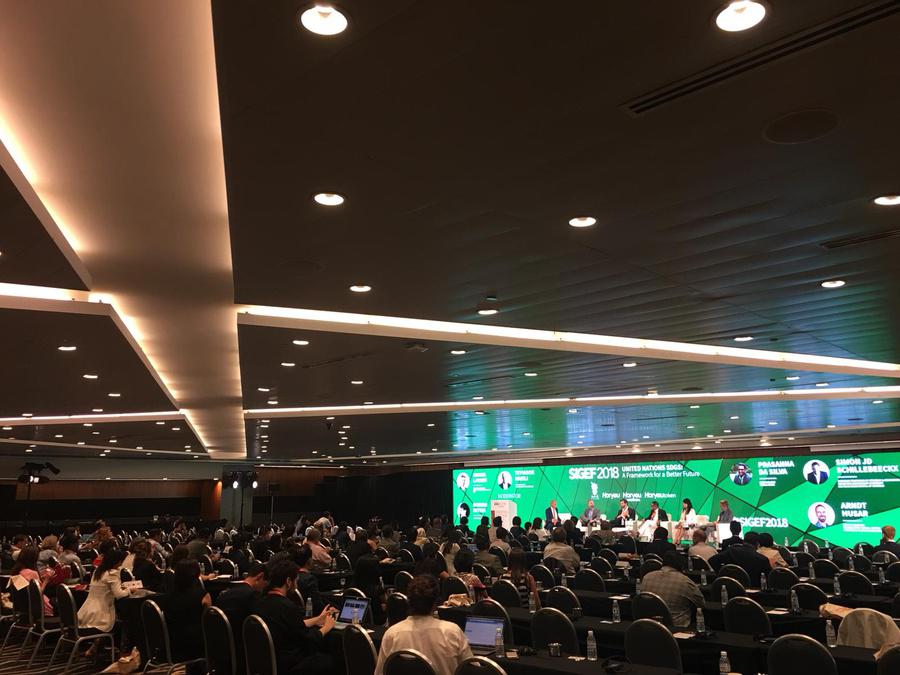 Lansonneur, Managing Director, Head of Managed Solutions and Investment Governance at DBS Singapore where he assigned himself the mission to source and distribute investment products and build an offer in social investment. Insisting on the need to avoid confusion between philanthropy and impact investing, he underscored the need to pick projects with a reasonable promise of guaranteed return on investment. As for Robert Kraybill, Managing Director, Portfolio Management of Impact Investment Exchange (IIX), has been instrumental in restructuring the Women’s Livelihood  Bond, a first-­‐of-­‐its-­‐kind listed impact investment bond designed to bring sustainable livelihoods to over 385,000 women in Southeast Asia.
Last but not least, Brian  Wilson who defines himself as a Blockchain and cryptocurrency evangelist,  has been focusing on Blockchain,  cryptocurrency and mining to solve hunger. Based in Japan, he advocated transparency and cited his country of residence as an example of openness. In line with his philosophy,  Wilson has started a cryptocurrency bar where he teaches cryptocurrency mining and the importance of this technology to the world. A firm believer in Horyou’s mission statement, he has opted to promote HoryouToken and has become an active ambassador of Horyou in Japan.
The final session on Future  Energy kicked off with a keynote speech and two pitches that paved the way for a lively panel on the pivotal question of production standards and synchronized distribution during the transition towards the provision of cleaner energy. In his keynote, Leopold Feiler,   a German serial entrepreneur in the fields of strategic marketing, media and communications,   and Blockchain enthusiast presented a revolutionary yet scalable and safe energy storage system that he designed and to which he finds potential to disrupt the future energy market. The pitch of   Rowan Logie, an advisor to Swytch, a blockchain renewable energy verification and incentive project designed to create a trustless global market for smart carbon off-­‐setting, presented various ways and devices based on solar energy. As for Vincent Bakker, co-­‐founder and CFO of Positive Energy, he exposed ways and means to simplify the financing of smaller renewable energy projects that are meant to enable a sustainable electrification of the APAC region.
The panel that followed, was comprised of Feiler, Logie and Bakker who were joined by Assaad Razzouk,   a Lebanese-­‐British clean energy entrepreneur, investor and commentator, and Ryan Merrill, adjunct professor in sustainability,   strategy and innovation at Singapore Management University. The animated discussions tackled the sensitive issue of realistic approaches to a smooth transition toward a wide scale production, storage and distribution of clean energy in the wake of the planned obsolescence – and death, in Mr. Razzouk’s words “Fossil fuels are dead, finished”, he affirmed -­‐, of fossil fuels. Absolute as it was, though put into perspective by the other panelists, Mr. Razzouk’s statement was nevertheless an indication that the future of clean energy seems to be clearing out. That, at least, was the “reason to believe and be optimistic” conclusion of the panel.
Reason(s) to be optimistic was also the closing remark of SIGEF2018’s MC, Teymoor Nabili, as well as its chairman, Yonathan Parienti, both of whom reminded the participants that  the forum’s primary aim was to nurture inspiration and positive action, while promoting the adoption of technology and innovation for sustainability and   inclusion as the right way to start shaping better times to come. An appointment was made for everyone to gather again at SIGEF 2019.