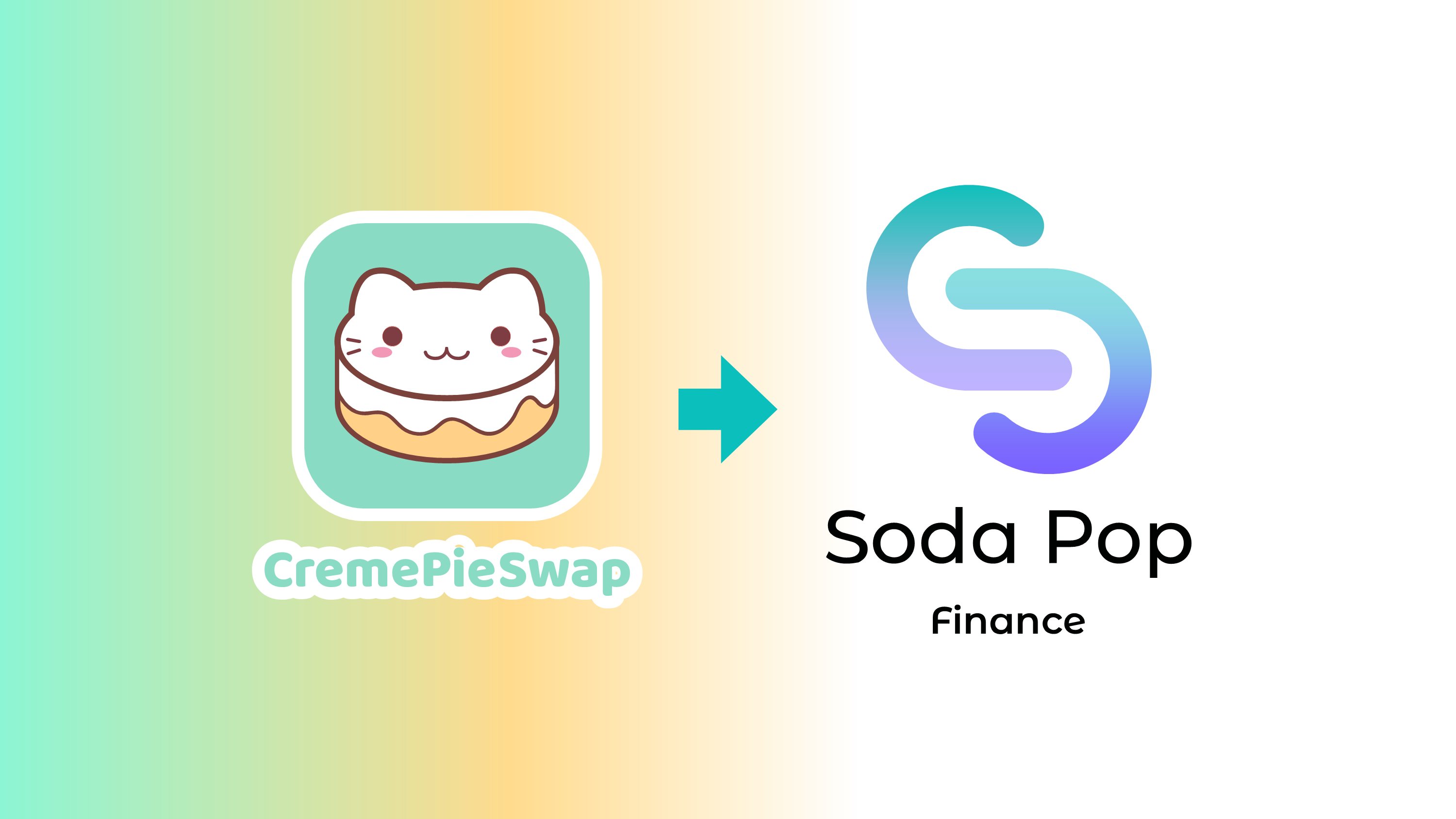 Sodapop Finance – a rebranded improvement of the previous CPIE DEX – is to be launched in January with dual-liquidity across both the Binance Smart Chain and Polygon networks. The SPOP token release will bring with it an end to CremePieSwap (CPIE) and all project components, including farms and pools.

A snapshot will be taken of CremePieSwap (CPIE) and the airdrop will be performed on an undisclosed date in January. The Sodapop founding team will surprise the community with the announcement soon.

There are a few details the team would like to highlight for the community, supporters, and future SPOP holders.

CPIE Holders MUST remove liquidity from Farms and Staking

The team requests that all holders remove 100% of any liquidity from CremePieSwap farms, or the liquidity pools on the CremePieSwap DEX. This will help to accelerate the website closure, as the Sodapop token readies for launch.

The CremePieSwap DEX will eventually be closed down – once all liquidity and funds are removed – with plenty of announcements to come reminding holders to withdraw funds during this time. The team greatly appreciates every effort in advance.

Furthermore, the CremePieSwap Telegram channel will be shut down during the transition to SPOP. In line with the NFT-related aims of SodaPop Finance, the project’s day-to-day community comms will be held on Discord.

The Telegram community will subsequently be shut down, with users encouraged to join the new discord channel link when available.

A new Twitter page with newly-created Sodapop logos, images, and links is in the works. All other relevant community or social media changes and adjustments will be released in a timely manner as they happen.

In order to move the new release along, SPOP will complete submission for the industry-leading Hacken audit. The penetration test applied by one of the Ethereum blockchain’s most trusted contract auditors will be completed in the coming days, between the 14th-17th of this month.

Unlike CPIE, which was solely on the Polygon network, the SPOP token will be available for trade on both Polygon and BSC networks.

Specific details of when liquidity will be added to each network will be released soon, with the possibility of further network releases in the future. More blockchains would mean greater project exposure and use-case for the Sodapop cross-chain swap to be released.

Sodapop (SPOP) will have a state-of-the-art website design, with a new UI and relevant content currently in development. The domain name sodapop.finance has already been purchased and deployment is underway. The soon-to-be-released website will feature an all-new UX and color scheme, with cross-chain swap integration to allow seamless swapping of tokens across multiple blockchains. Multi-chain ability brings further options to any cryptocurrency project by extending visibility and trade interoperability – with traders on networks beyond the host blockchain.

Cross-chain swap is one of the various ways the team is planning to develop expanded use-cases. In line with expansion, Sodapop also plans to develop an innovative NFT marketplace, which also adds to the utility offerings of the ecosystem.

The NFT market is one that has exploded exponentially, consistently growing since 2019. Last year alone NFT revenues reached close to $30 billion.

The Sodapop team will continue to release updates as preparations are made for progression which comes in the form of one project ending and another beginning. The new website platform and NFT integration is in development and will be ready prior to the SPOP launch. All utilities and other aspects of Sodapop are developing as planned.

Again, as a reminder to all current CPIE holders – please unstake, and withdraw tokens from all pools and farms at the earliest convenience. The team is very excited to proceed forward and release more of the developing plan for the SPOP utility offerings and ecosystem. Keep an eye and ear open for future news, as we grow closer to the SPOP token launch, and CPIE holders airdrop.

The Faith Connexion with the Metaverse