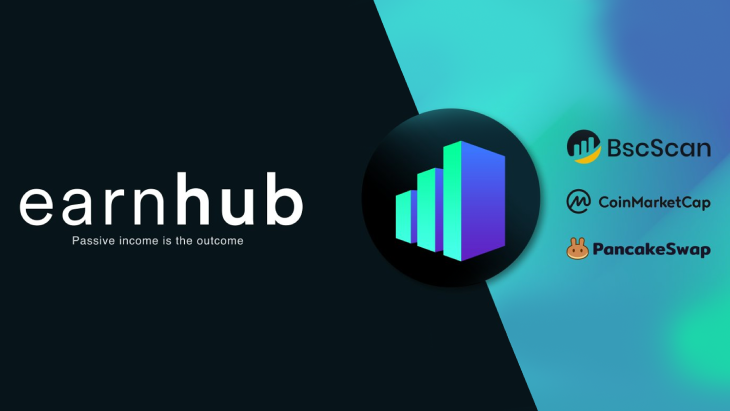 EarnHub is proud to announce the launch of its token and staking platform, allowing the users to stake their EarnHub tokens to generate revenue with no locks or fees. When many invest their hard-earned money into a low marketcap cryptocurrency, the first thing that they want to know is exactly how they can make money with it – and how much. EarnHub offers multiple ways to earn, not limited to just their staking platform.

Though meme coins like SAFEMOON, SHIBA INU, DOGECOIN, and FLOKI have taken the stage recently, the true innovators in the space are shining through with new developments designed to replace standard financial functions with opportunities that can present returns beyond just speculation.

EarnHub is launching with a staking platform that rewards in partner tokens with high volume-based returns, and passive reflections in ANY token, rather than one singular option as EVERGROW COIN does.

EarnHub aims for long-term growth and consistency in returns through their innovative volume-based staking platform– enabling users to stake their tokens and earn other project tokens.

The APY for each pool will rise as EarnHub grows and reaches new investors, and by cycling new token partnerships in and out they gain access to new project communities, acting both to diversify a holder’s crypto portfolio and as a marketing initiative.

AnyFlect: Hold EarnHub and automatically receive rewards in ANY token on the Binance Smart Chain. It’s as easy as connecting to their proprietary dApp and choosing a project you like. This can be done in addition to staking, compounding your earning opportunities through holding one single asset.

Reward Pool Staking: By lending liquidity to EarnHub, holders can earn back reflections in the native token at an increased rate compared to partner staking or reflections.

Loyalty Returns: By introducing others to the project or reinvesting other tokens back into EarnHub, taxes on buys and sells will be reduced, allowing holders to increase their positions at a lower rate. Those who hold their tokens for a specific amount of time will also be rewarded in additional functions on the dApp that will allow them to increase their return rates, such as automatically compounding rewards.

Curated Presale Launchpad: Holders of EarnHub will be able to take part in private presales of vetted projects, allowing them to get investments in early for projects vouched for by the team. This will also serve as an on-ramp for new projects to be partners on the EarnHub platform.

Many tokens launch on the Binance Smart Chain by copying and pasting coding, but EarnHub’s team is made up of experienced professionals who’ve created the entire earning platform from scratch. EarnHub aims to be a solution for all users when it comes to staking and generating higher revenue.

Set to launch on November 23rd, EarnHub will bring an earning platform for generating revenue to the Binance Smart Chain and redefine the way passive rewards are done.