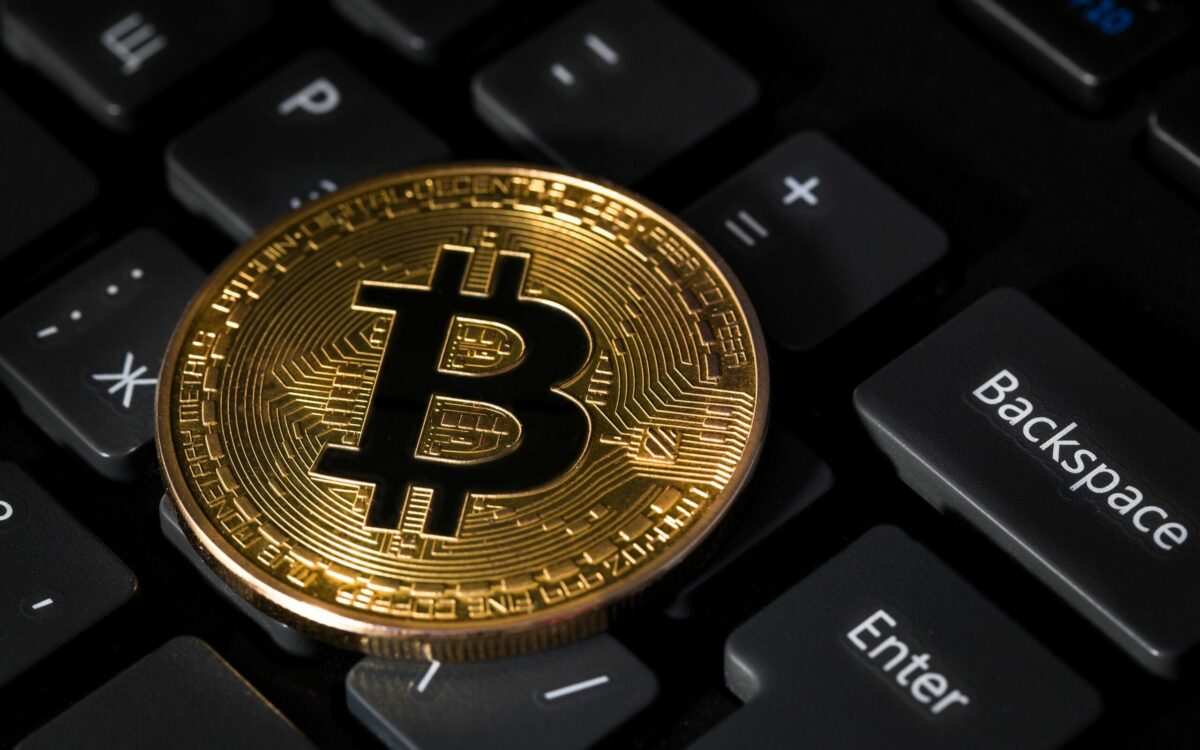 Somehow after a solid performance throughout the month, Bitcoin has slowed down for the last 8 days. The rally which brought the ATH turned into consolidation with some significant drop in price. But it wasn’t really worrisome back then as much as it is now. Certain developments in the on-chain data have led to a 180° shift in investor behavior as well.

Since 21 October, 2021 the king coin has dropped by almost 8%. However, price corrections are common after such rallies. It was the fall of the Spent Output Profit Ratio which raised concerns. As the indicator fell from strength to weakness it indicated 3 possible scenarios going forward.

The first of it is that top buyers could be realizing losses. The consolidation and correction led to certain investments failing to generate profits and the same inference could be drawn based on the on-chain data. Realized profit/losses chart shows that in the last 1 week, BTC in supply has noticed a fall in profit which in turn leads to losses for investors.

More than 50% of all profits gained throughout the month were wiped out in the last few days. 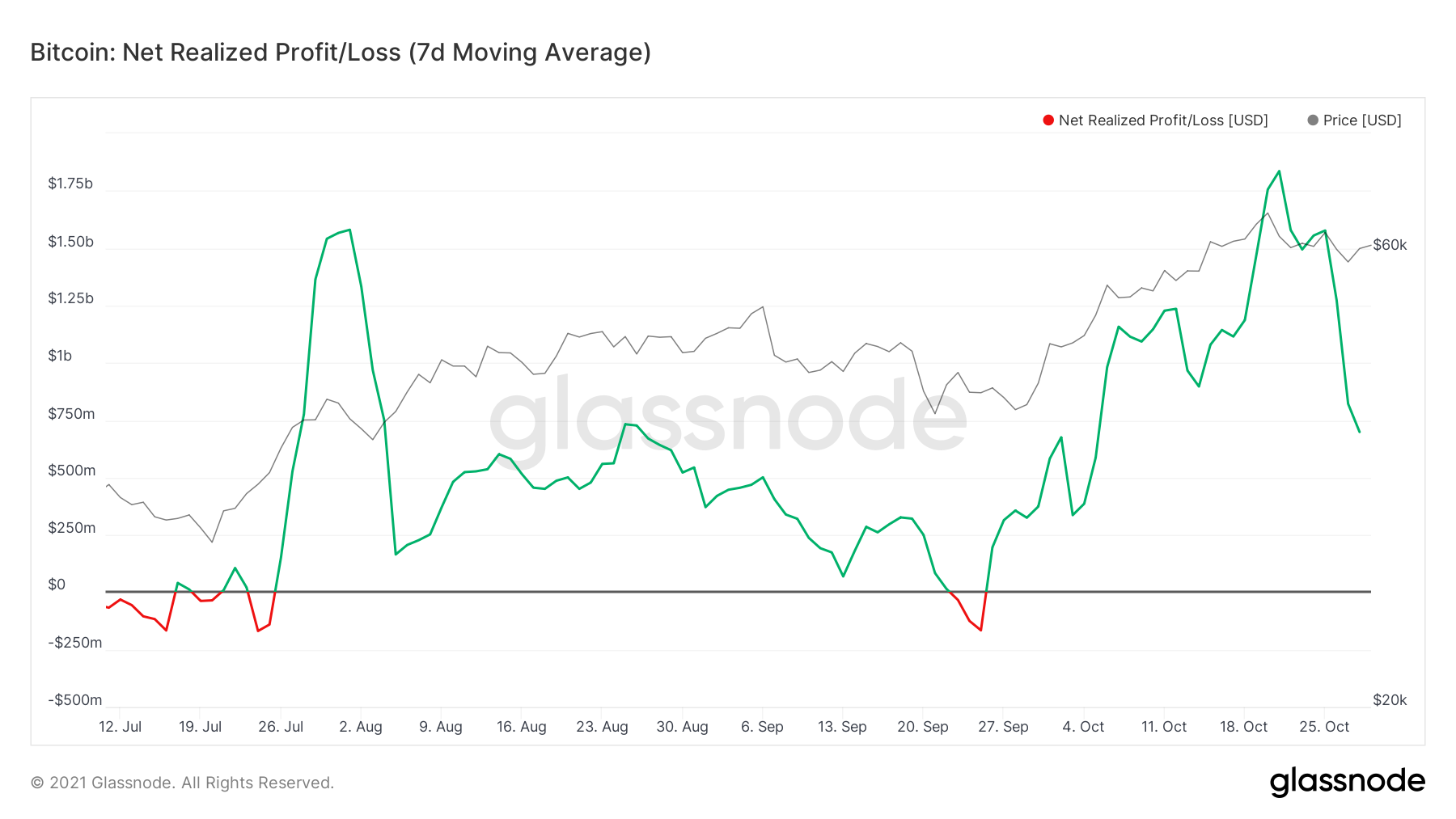 The second scenario is, the profitable coins are staying dormant and not changing hands. HODLers who have been buying Bitcoin are not very active in changing hands, which leads to a fall in the velocity of the asset and right now could be one of the reasons for the fall in SOPR.

HODL waves verify this behavior as well. Cohorts older than a day and younger than two years have not moved their supply by the slightest. Their percentage remains the same and stagnation is never profitable in any environment. STH, MTH, and LTH might want to soon change this behavior. 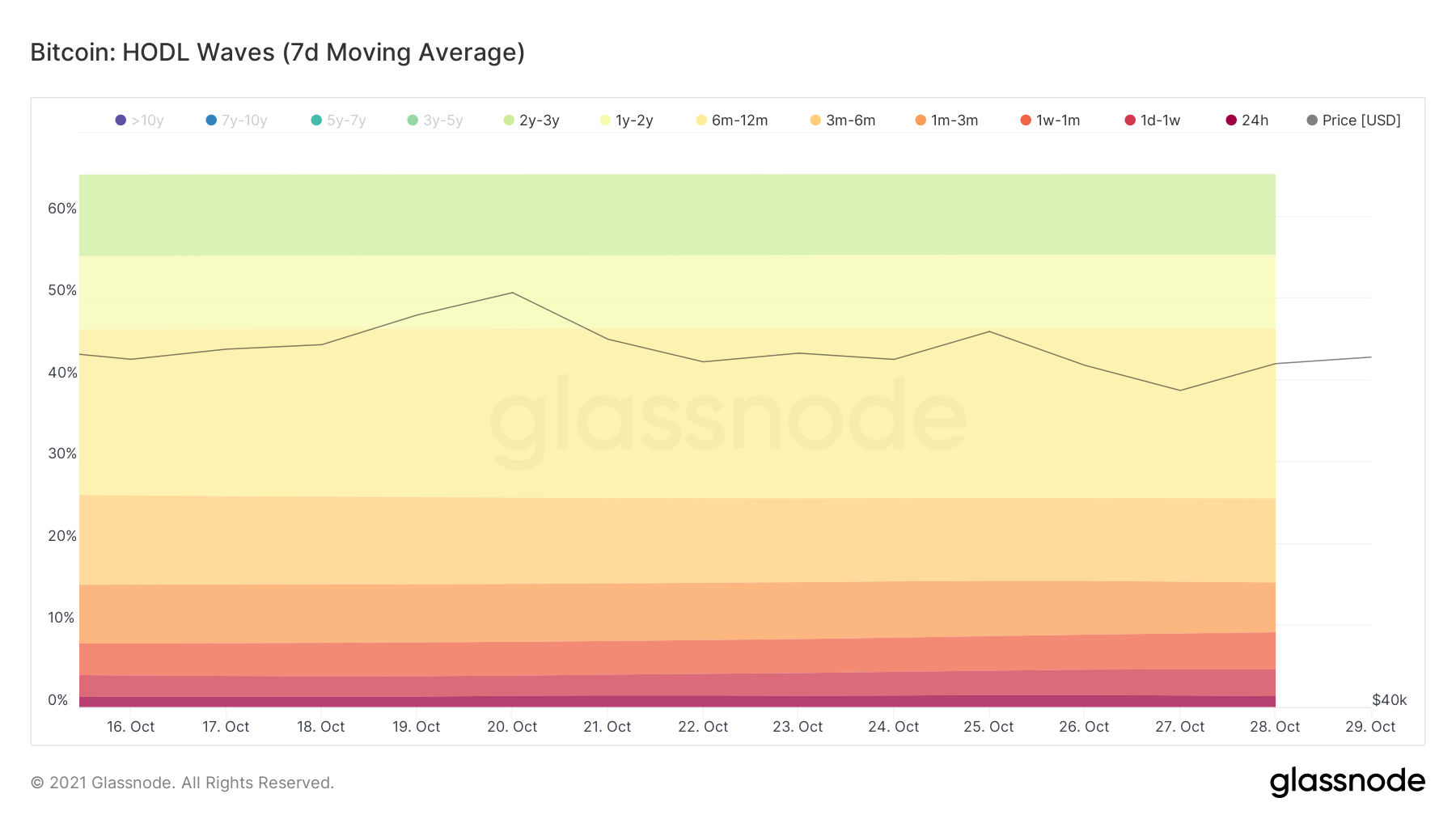 Any effect on the price?

There is indeed, as lastly, we have the possibility of a price bounce back. SOPR resting at 1 historically during a bull market, such as the one active right now, is basically a trigger point for support. Aside from capitulation in a bear market, the level of 1.0 has resulted in a push back up. 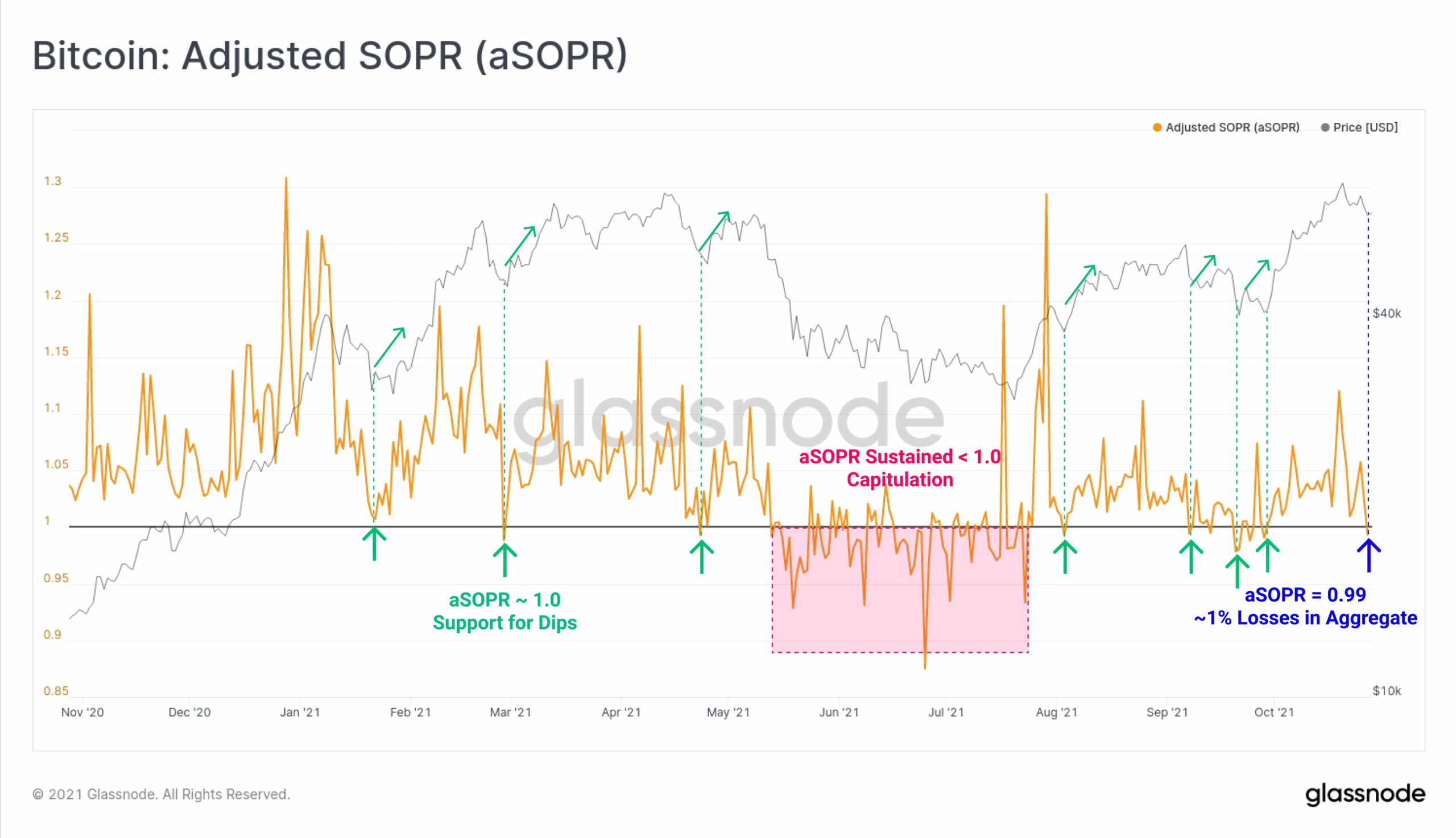 So if we consider that case, we can gauge the possibility of a price reversal. For the same, we’ll take into account The MACD and Squeeze Momentum indicator.

The former has been displaying a bearish crossover as the signal line moved over the indicator line this week. The bars below do signal some bearishness receding today but it can’t be declared for sure.

As for the Squeeze Momentum, we can see the bullishness receding here (appearance of dark green bars). The month-long squeeze release (marked by white dots) finally stopped 48 hours ago and as long as no red bars appear the price could recover. 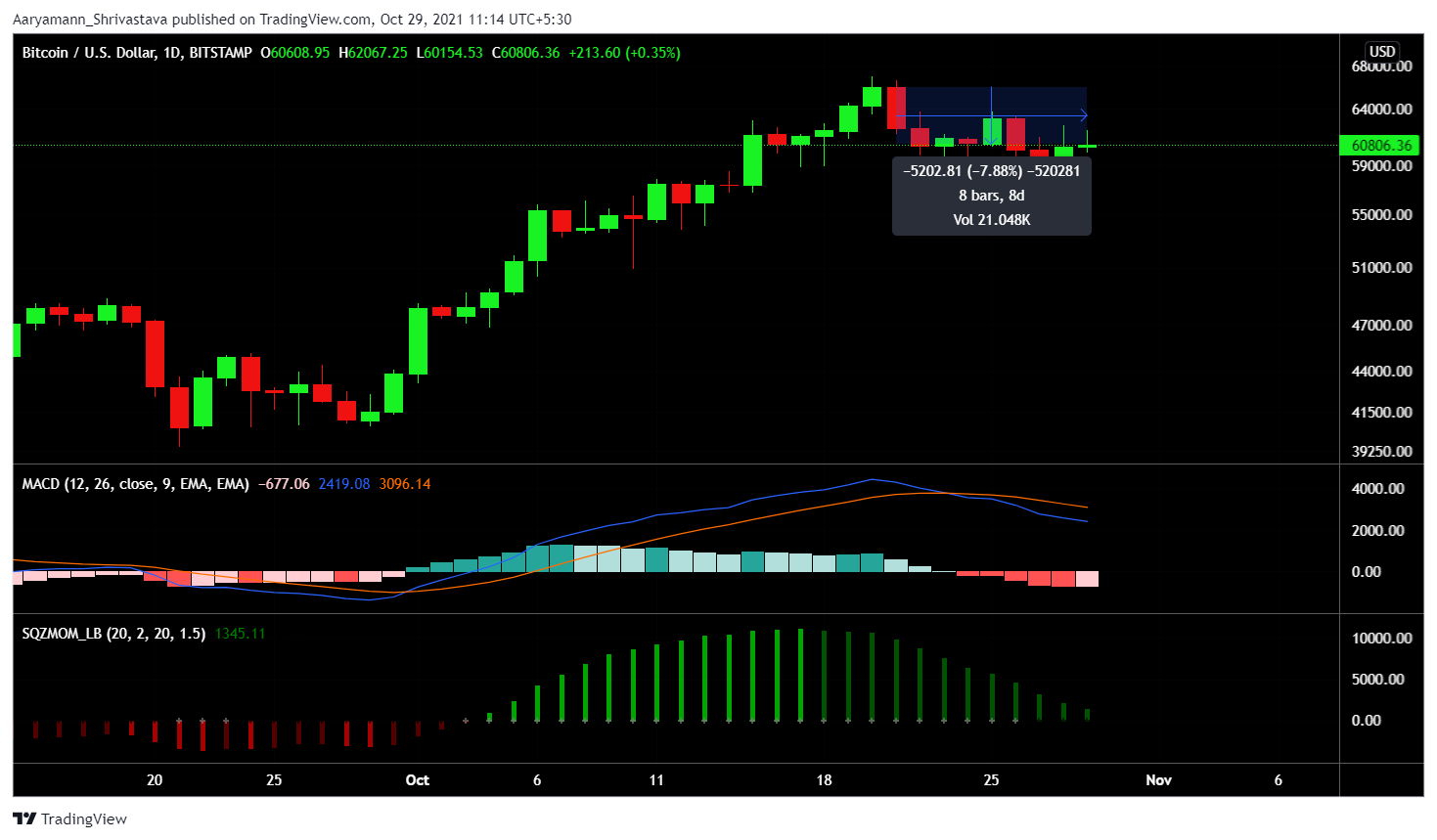 While the likes of SHIB are jumping by billions in value, Bitcoin’s slowing down invokes certain anxiety. However, despite losses, fortunately, this is still considered a bull market. But its very likely that the dormancy of investors could create problems if the price does not bounce back.