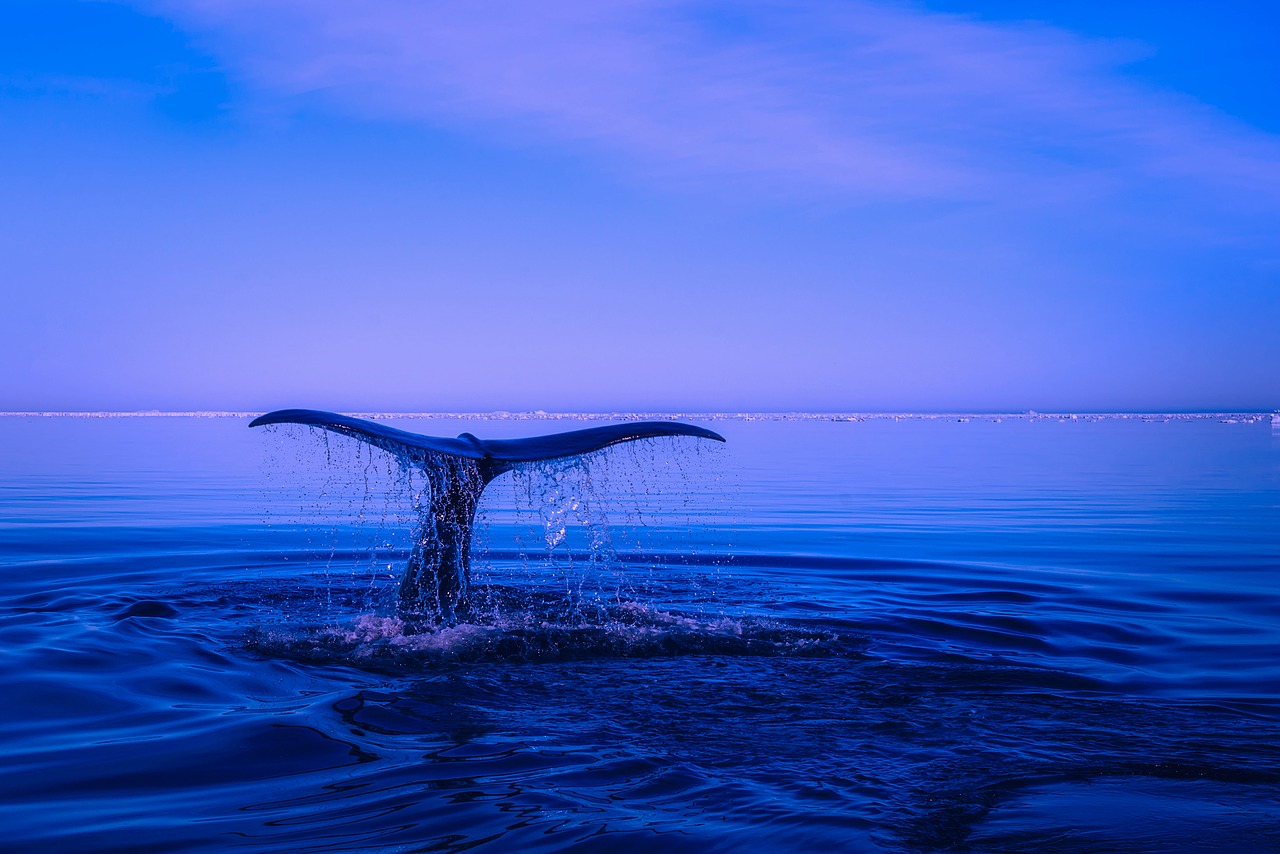 SushiSwap the popular DEX in the DeFi ecosystem has seen quite a few developments in the past few months. The SushiSwap token has also mirrored this growth and registered gains amounting to over 170 percent since the start of 2021. At press time, SUSHI has a trading value of over $7.2 is ranked 46th on CoinMarketCap’s list.

While Sushiswap’s price action in the past month has exceeded expectations, it is also evident that, much like the altcoin market, SUSHI is not immune to Bitcoin’s influence. The coin has shown a strong correlation with the king coin and in the past month have seen price corrections in sync with that of Bitcoin. Most recently Sushiswap’s price fell by over 38 percent on 11 Jan and in the past week, as Bitcoin endured an 8 percent drop, SUSHI mirrored this move and saw its trading price depreciate by around 28 percent.

However, if one were to look at the coin’s performance since the 21st Jan price drop, SUSHI’s price action looks quite promising with strong bullish momentum backing the coin. In the past 48-hours, the coin has managed to secure a 100 percent recovery and maintain its position above the prized $7 mark. Interestingly, Santiment’s data regarding this recovery run and the overall bullish momentum SUSHI has pointed to one aspect of the token’s userbase – whale accounts. 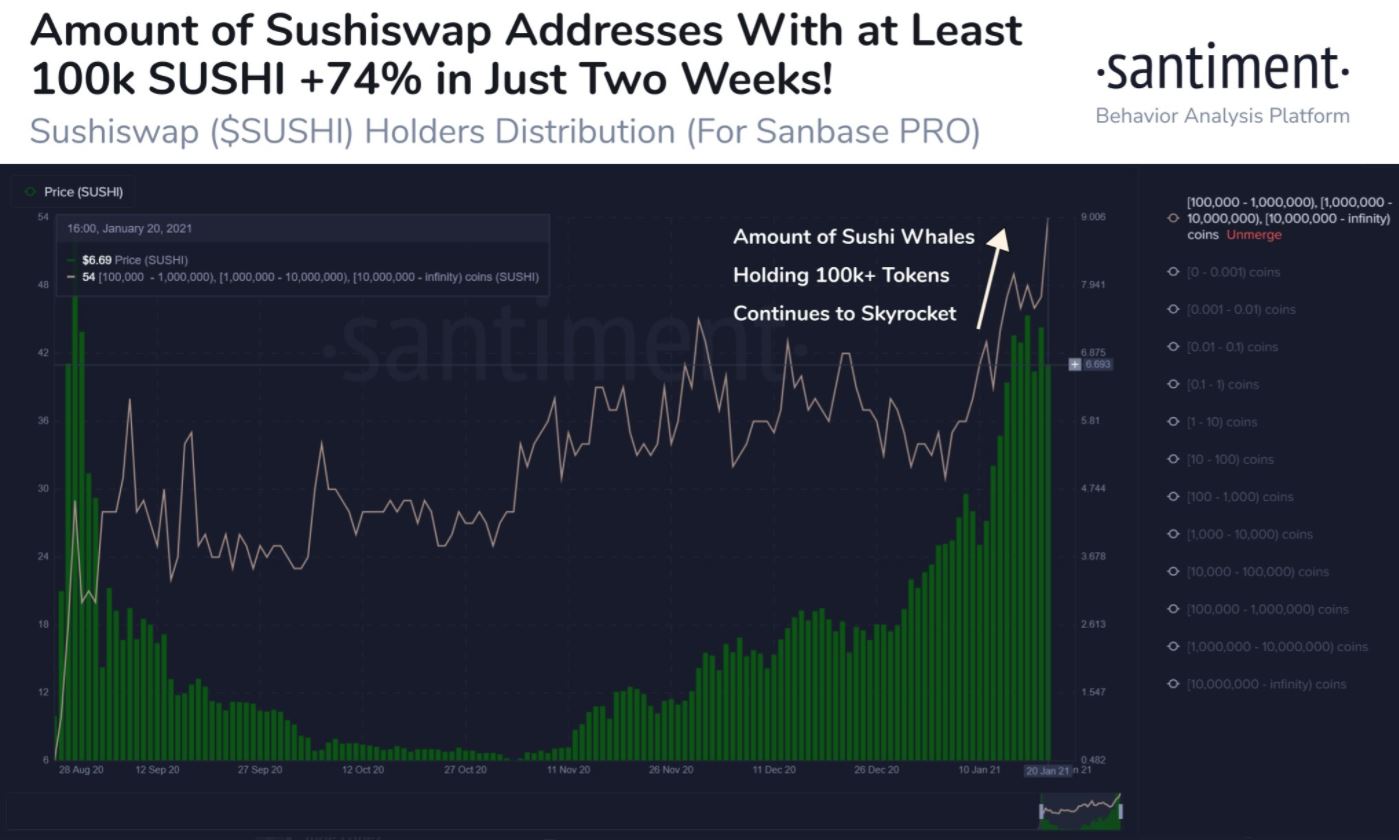 Whale accounts through their sheer scale have the ability to rock the boat when it comes to a coin’s price action on the charts. As per the data highlighted by Santiment, Sushiswap’s price has greatly benefited from the large scale addresses that have acquired and hodled the token.

Since the start of the year, whale addresses have surged for SushiSwap. Accounts having over 100K SUSHI have increased by a whopping 74 percent in the past two weeks. This has translated well for the token’s price on the charts. In comparison to the token’s valuation before Bitcoin began its bull run, the current price of SushiSwap is extremely good. While the $7.2 price point it currently occupies may seem like a lot, given the popularity of the DEX and the token, along with the fact that it has had quite a few notable developments in the recent past. A few weeks back SushiSwap’s 2021 roadmap revealed its plans to integrate with Polkadot from Q2 of this year. This momentum and string of developments are likely to help in the price discovery for SushiSwap even as it breaches the $7.4 resistance. This has been a key level for the coin and the past few days have seen multiple failed attempts. 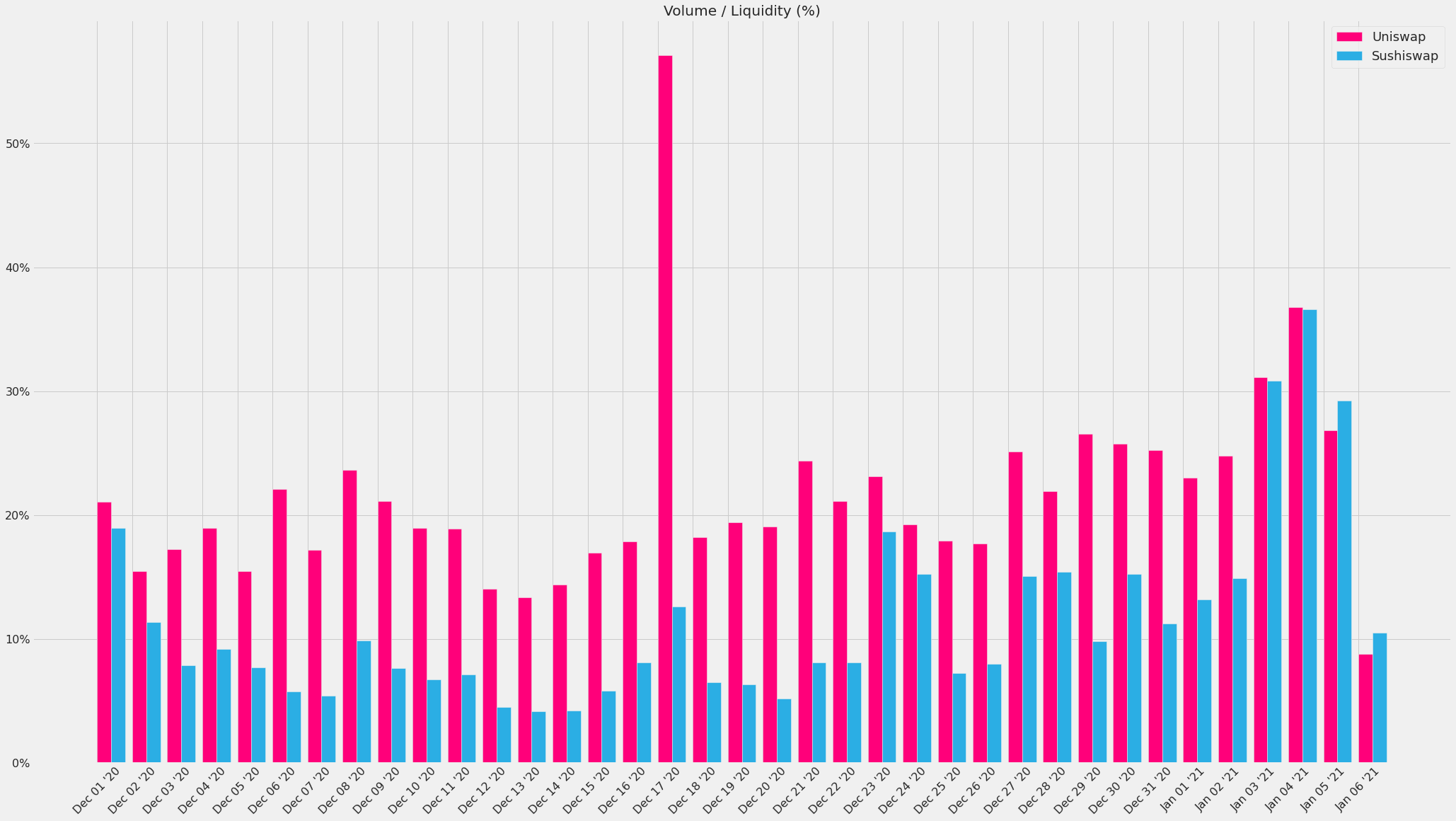 In an earlier article, it was argued that the token priced at $7 is still undervalued and the past few days’ price action seems to further strengthen the validity of that argument. In comparison to other tokens like Uniswap, SUSHI’s increased bullish performance is extremely evident. The capital efficiency metric that looks at the efficient use of liquidity is a case in point and shows how steadily the coin is catching up.

However, given the continued growth of large whale accounts and the strong hodling sentiment, SushiSwap’s $7 valuation is likely to see a significant boost. Given the present market conditions and the coin’s strong fundamentals, a continued uptrend seems like a matter of ‘when’ and not ‘if’.