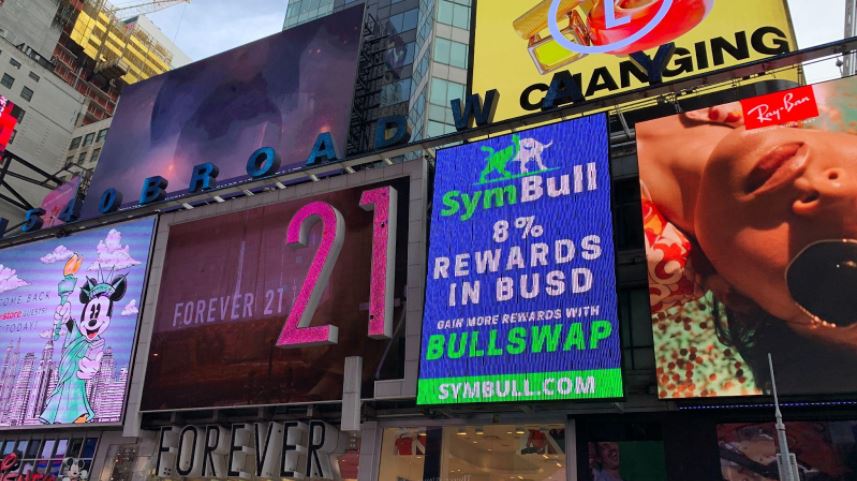 SymBULL a decentralized token created for the first crypto Ecoverse. In what seemed like a major milestone for the project, on November 13th, 2021, SymBULL appeared on the billboard of New York City’s Times Square. The billboard displays the SymBULL logo and reads “8% rewards in BUSD.” This achievement has impacted positively on the value of the token. Since its inception, SymBULL has continued to gain traction thereby incentivizing investors to adopt the token.

Launched on November 1st, 2021, the project has rewarded early bird investors with more than $833,47018. This amount was paid directly to the wallets of deserving investors. SymBULL has burned more than 60% of the total supply in circulation. For every transaction on the network, token holders will continue to earn BUSD. You can track your rewards through DApp on the official website.

SYMBULL is the foundational and native currency of the SymBull ecosystem. SYMBULL represents the other end of the project’s EcoVerse. Investors can buy, sell, or swap the token for real-world money in their wallets. SYMBULL lets the #BullArmy vote on upcoming proposals in the DAO.

Token holders will earn lots of rewards, including 8% of every transaction on the network pegged to BUSD. The earnings will be credited to investors’ wallets automatically, with no manual process. SYMBULL will become scarcer with time to create room for price appreciation so that investors can reap from their efforts.

Token holders can claim their rewards manually on the DApp dashboard or choose to receive them directly to their wallets.

BullSwap is the next evolution in decentralized finance platforms. It was created by the coming together of RIDE and CHARGE. BullSwap lets you stake, provide liquidity, or swap your tokens to generate returns.

SymBULL parades a team of experienced and knowledgeable developers with expertise in banking and blockchain development. The team boasts of more than 30 years of experience and has a track record of performance.

The team is committed to the success of this project and that is why they are seeking the assistance of DevTeamSix. In the coming weeks, the team plans to launch the MoonFORCE platform.

SymBULL is a deflationary token that created the first crypto Ecoverse. Token holders will be rewarded for their loyalty and efforts towards the growth of the project. For every transaction carried out on the SymBULL network, token holders will earn 8% of the transaction, which will be credited to the wallets.

As an investor, you can purchase and hold the token to enjoy price appreciation in the future. You can equally swap it on major exchanges, including PancakeSwap.