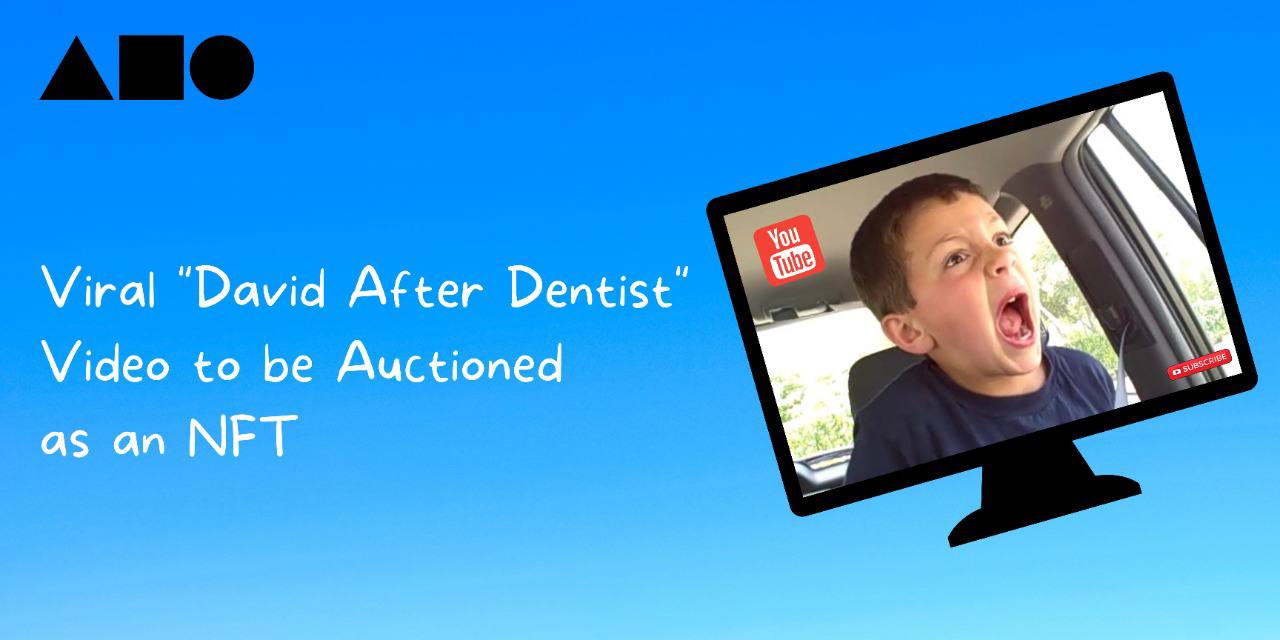 The YouTube video sensation that went viral in 2009 of David DeVore at the dentist, is being auctioned off as a non-fungible token (NFT) on the NFT platform, Foundation. The auction will start at 1:00 PM PST / 4:00 PM EST on the 6th of May, this will be a 24-hour auction with the bids starting at 1 ETH, currently valued at a little over $3,400 USD.

To date, NFT sales have exceeded $2 billion USD, with twice as many buyers as sellers, paving the way for the next wave of mass adopters. The YouTube video of David DeVore in the car after the dentist is an early meme culture classic, with the sales of meme NFT’s surpassing $2 million USD since February. Recently, there have been other memes sold on NFT platforms for significant sums.

The NFT auction will give buyers an opportunity to own a piece of entertainment history that received over 140 million views, and featured on The Today Show, The Tyra Banks Show, Fox News, and Forbes. This video was posted during the dawn of the social media age when people shared everything about themselves on Facebook on a regular basis.

David DeVore has also mentioned that he is unsure of whether or not he will be creating another NFT in the future. Therefore, this NFT will be his single, one-of-a-kind, exclusive piece of internet history, that will essentially be sold to the highest bidder, within 24 hours of the launch.

“We’ve dabbled in crypto during quarantine, and we came across NFTs because of that,” David mentioned in an interview. “David After Dentist has been an amazing ride since 2009, so why not?”

“Foundation is a platform that fosters all kinds of creators, and we’re thrilled to see the original arbiters of memes and internet culture finally find recognition in the NFT space.”

Foundation (http://foundation.app) helps creators mint and auction their digital artworks as NFTs on the Ethereum blockchain. As collectors bid, they fuel a new system of value for online expression. Foundation bridges crypto and culture to create mutual support between artists and collectors.

We’re forging a community-driven path, providing culturally pioneering curation, and sharing our tools with the rapidly evolving community of developers who are excited to define this future with us.

Since launching in February 2021, creators have directly earned over $40M in NFT sales on Foundation overall, and over 425 artists have earned more than $12,000. There are more than 5,000 unique bidders on the site. Real-time updates on our fast-growing market live in the Foundation terminal.

Have the best Crypto gambling experience with Bitfresh Casino