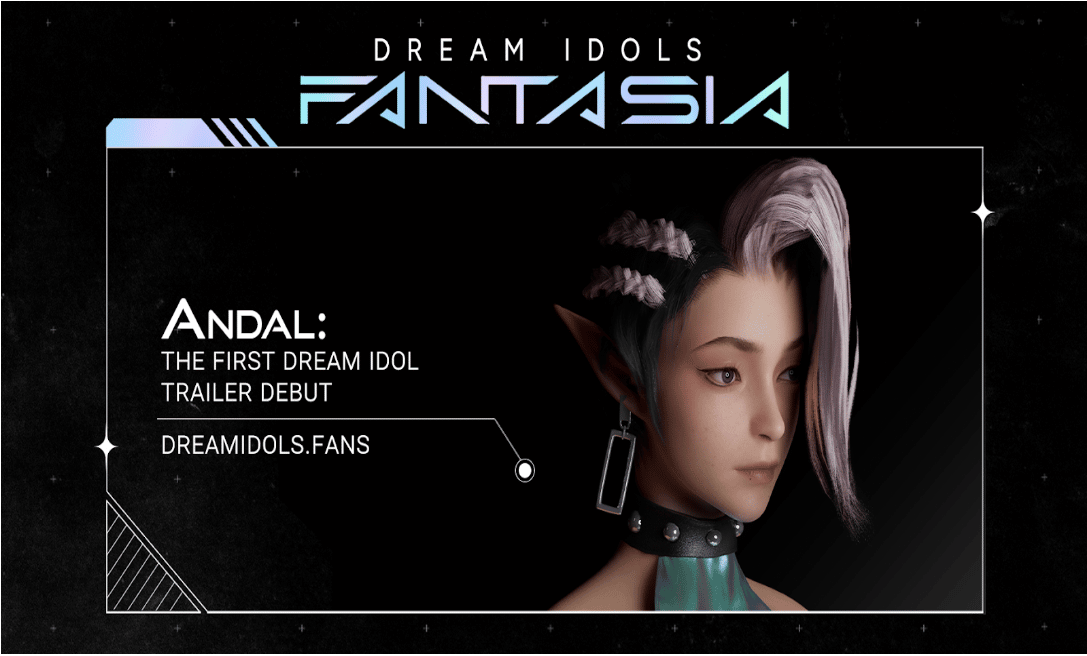 Take a sneak peek at Dream Idols, the girl group that is taking over the X World Games metaverse, in their newly launched trailer debut by visiting DreamIdols.Fans!

Introducing crypto’s first virtual reality idol group, Dream Idols: Fantasia, the idol group of four girls, Catherine, Luceo, Betty, and Andal, are making their debut in the X World Games metaverse. Catch the first look at the girls in their new trailer on the DreamIdols.Fans website!

X World Games, the blockchain gaming company behind the building and development of the girl group, is excited to launch its next project venture within the SocialFi and entertainment space. The crypto space has seen other metaverse concerts and solo VR idol acts, but X World Games is pioneering in building a metaverse entertainment group that innovatively combines crypto framework with idol group entertainment.

Fantasia is the first generation of the Dream Idols entertainment group launched by X World Games. Their unique Japanese ACG art style comes from the existing NFT hero characters from the popular video game series, Dream Card. The idol group characters were voted and chosen by the XWG DAO community, and the NFT characters will now come to life with VR technology to birth the first crypto VR idol group.

Behind the scenes, the Dream Idols will be real! The girls behind the characters will be professionally trained in singing and dancing and be selected for their talent in performing and personalities. The group will perform original songs and dances in 3D VR environments made just for them. The Dream Idols will not only bring mesmerizing concerts to their fans but be fully dedicated to connecting and sharing through backstage interviews, the girls posting on their social media communities, and much more!

X World Games has invested in delivering the best motion capture, VR, and 3D CGI technology to bring the Dream Idols to life. By utilizing technology like cloud rendering, the VR landscape and girls will render at 4K, about 500 times faster than a single computer system. The X World Games metaverse and Dream Idols concerts will be accessible through VR gear like Oculus, Pico, Vive, etc., and we will be working on bringing fans mobile devices compatible in the future. Fans will dive into the Dream Theatre’s 360°, multi-sensory, high-resolution environment to experience its interactive, immersive, and captivating VR landscape and motion-captured performances that will truly make you feel you are there.

Coming to the stage, Fantasia, the first generation of Dream Idols, will be Catherine, Luceo, Betty, and Andal, and they will be taking the stage at the Dream Theatre. The Dream Theatre will be the stage where all the Dream Idols’ live shows take place. With its changing environments and stage features, there will also be a crypto framework to allow Dream Girl fans to interact with the theatre and the group. Every single fan will be able to be involved and participate in the concerts.

Invite your friends to build the strongest fan club surrounding one of the Dream Idols to earn! The Dream Idol community will participate in SocialFi functions, events, and live streams. By combining live entertainment with decentralized finance principles, fans can grow their fan clubs and earn based on their engagement, club size, and event participation. Idols will reward their fans with the revenue generated, connecting the individual idol’s success to the fan’s engagement. Creating a dynamic Web3 earning system that gives the attention profit back to the community.

Take a look at what’s in store for fans on the new official website for the world premiere! Fans will soon learn how to get involved and win prizes like VR gear! With the community already awaiting its debut, X World Games is excited to launch its one-of-a-kind crypto VR idol group, Dream Idols, to the world.