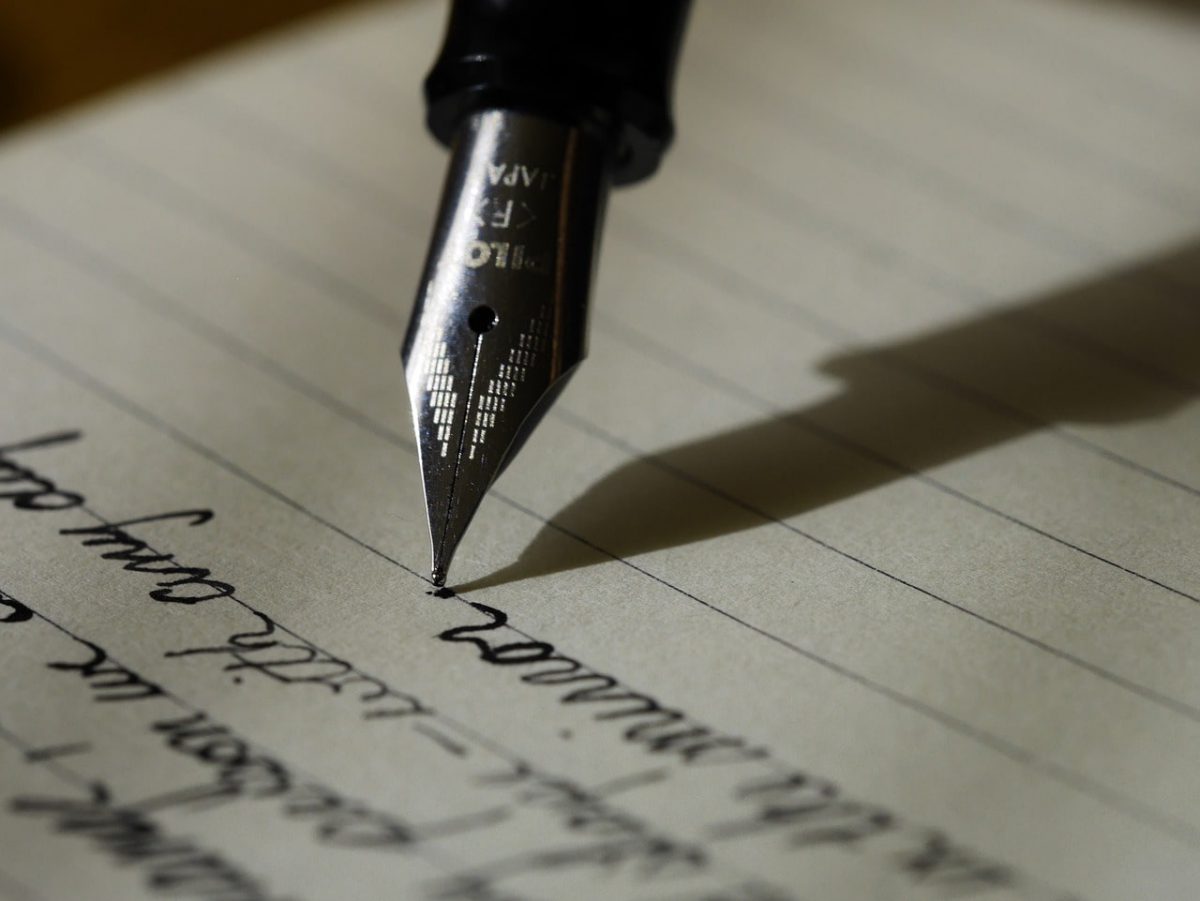 Tron recorded some significant volatility over the past week, with a choppy Bitcoin market being a major contributing factor. On the other hand, BAT soared past $1 and touched a high of $1.41, while VeChain marched steadily higher. 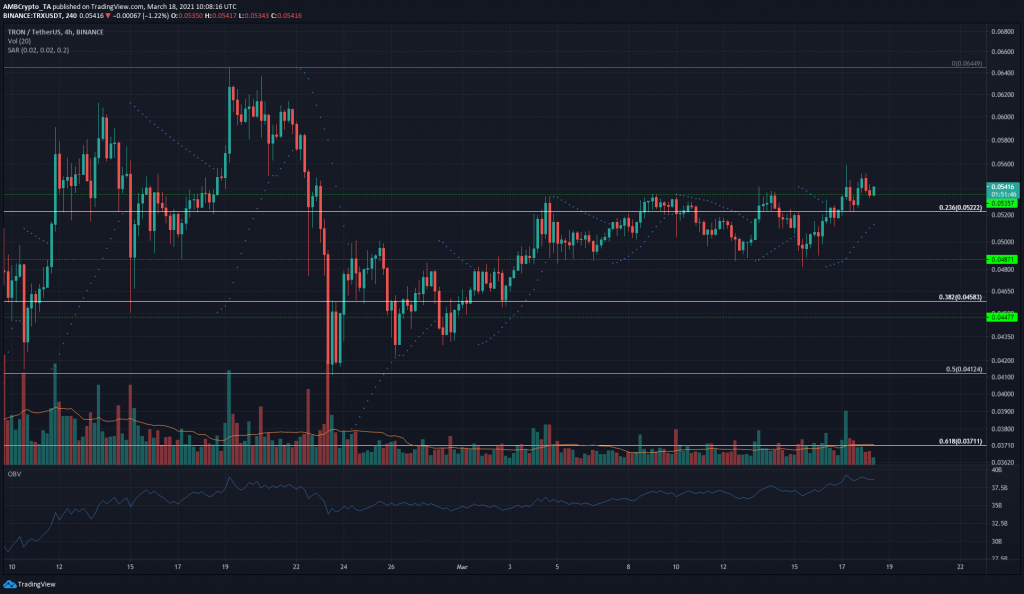 The $0.0535-level and the $0.0487-level represented a 9% move down and a near 10% move back up for TRX. On the price charts, the price did indeed bounce between these two levels over the past week, showing strong volatility on the shorter timeframes.

On the 4-hour chart, things were slightly clearer. TRX flipped the $0.0535-level from resistance to support and was heading higher. Further, the Parabolic SAR gave a buy signal, and resistance can be expected at $0.0563 next.

The OBV was also steadily trending upwards, suggesting that steady demand from buyers will likely drive the price higher. 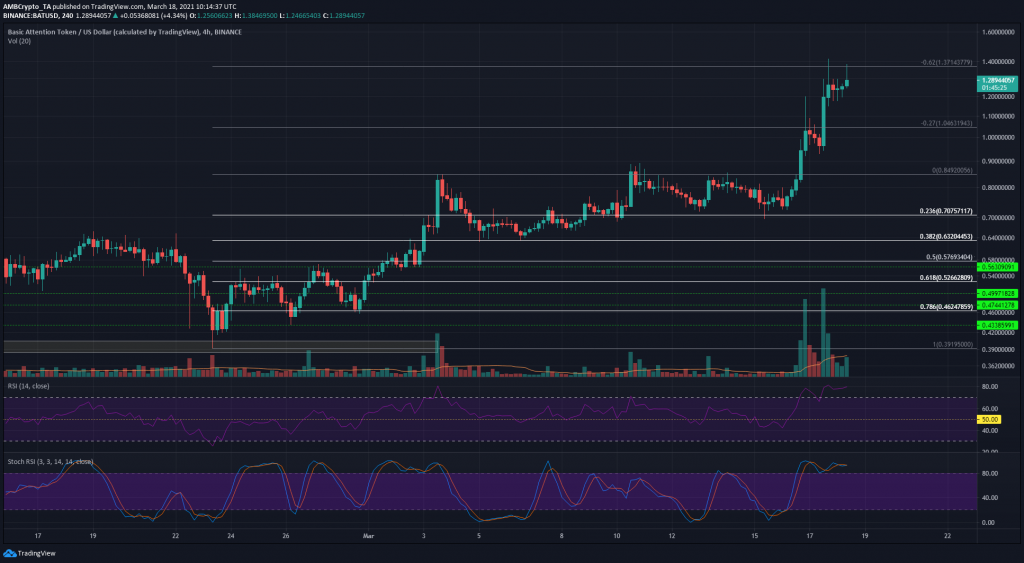 Both these levels have been tested by the price, and the RSI and Stochastic RSI on the 4-hour were well into the overbought territory.

Using a bearish divergence or a Doji candle or a bearish engulfing candle on a timeframe higher than the 1-hour could give an entry to a short position targeting $1.1. A better trade would be to wait for momentum to reset or a revisit of $1.1, before entering a long position. 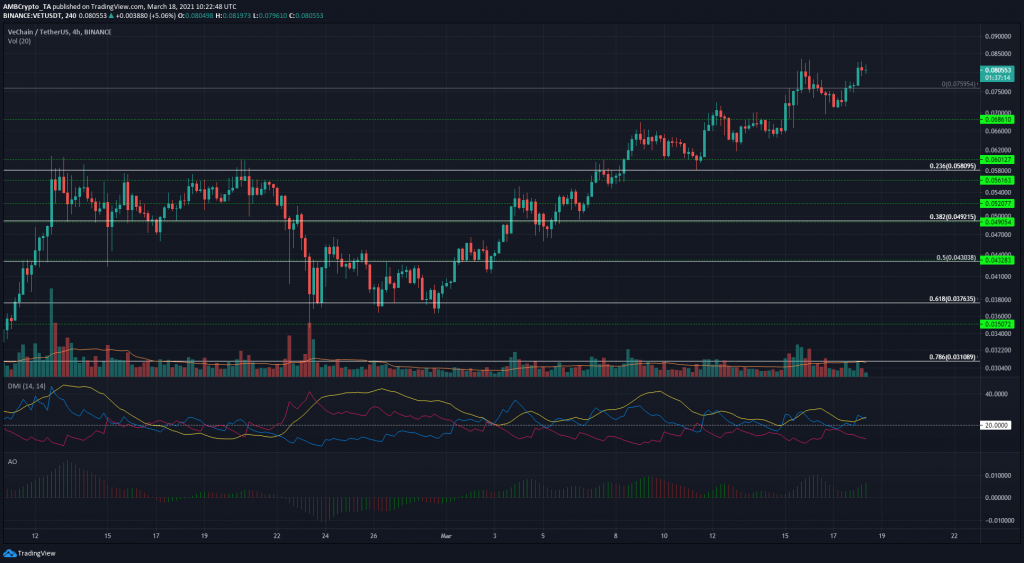 The momentum of VeChain had not slowed down, even as it plowed past levels of former resistances. The Directional Movement Index pictured a strong uptrend in progress as the ADX (yellow) and the +DI (blue) stayed above 20.

The Awesome Oscillator could form a peak lower than the previous one before falling, which would be a bearish twin peak and a short-term sell signal, and a pullback to $0.075 can be expected.

At the time of writing, VET was already above the previous wave’s candle highs at $0.0805, and moving higher would reaffirm the bullish target of $0.1 (27% Fibonacci extension level).

What should you know before Ethereum’s next ATH?