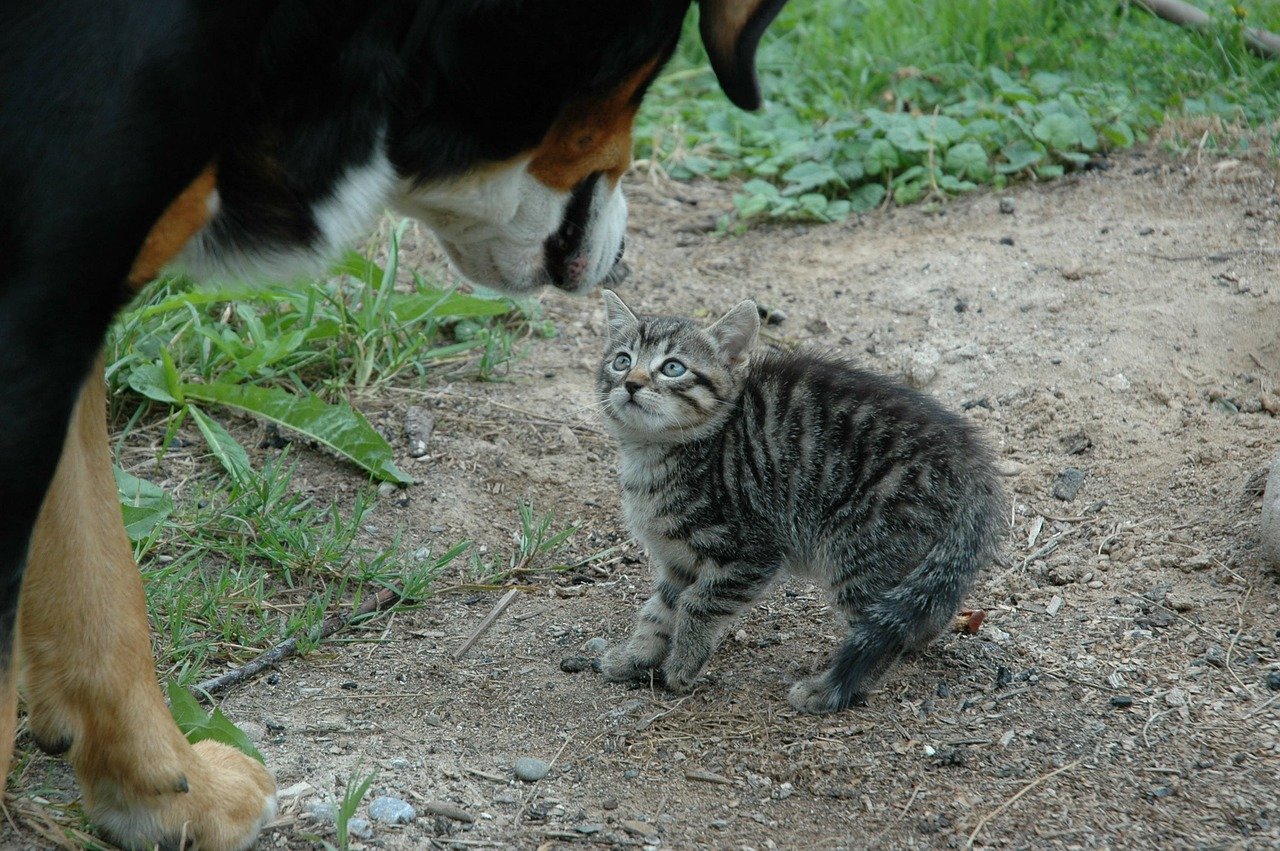 To best understand the crypto-space, it is also important to understand the notion of competition that drives it. Like the emergence of “Ethereum Killers” over the past few years, the DeFi space too is seeing protocols and projects going head to head, trying to one-up each other. Uniswap, one of the pioneers of the Automated Market Maker (AMM) models, was the subject of a previous article, with the same highlighting why it is one to watch out for.

However, no analysis is complete without a critical examination of how it holds up against its competitors. So, let’s look at Uniswap once again; this time, relative to the popular Sushiswap, a comparison that was also the subject of a recent Bankless newsletter.

Context is important here, as it always is. Consider this – SushiSwap emerged out of the food farming mania that was part and parcel of the DeFi summer last year. In fact, for a long time, the popular understanding suggested that it was merely a “generic, tokenized fork” of Uniswap. Fast forward to 2021, and many would argue that it is giving Uniswap a run for its money.

According to Bankless analyst Lucas Campbell,

“Sushiswap has not only survived, but thrived and innovated on the AMM model beyond all expectations. Sushi is now genuinely competing with its predecessor on multiple levels.”

Trading volumes and market share are a good place to start when drawing comparisons. Consider this – In terms of weekly DEX volume, Uniswap held a market share of 51.6% while SushiSwap had a share of 23.8%, as of 01 February. Just three months ago, however, the latter had a share of just 1.98%.

Even on a month-on-month basis, SushiSwap’s volumes have risen exponentially, overshadowing the rest of the competition, including the likes of Uniswap, despite the fact that the latter continues to hold the lion’s share in the market. While SushiSwap processed just over $3 billion in monthly DEX volume in December, the same shot up to $12.2 billion in January. 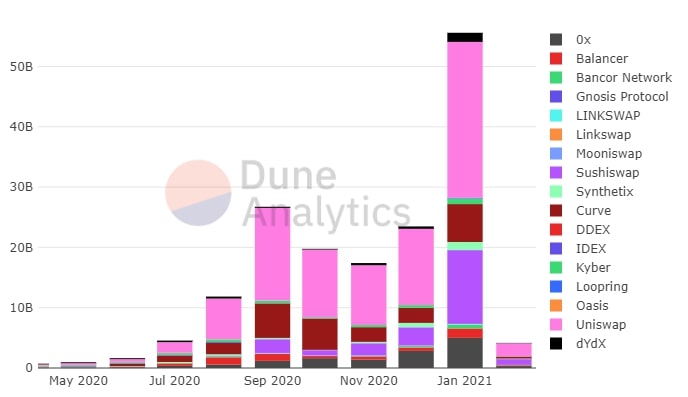 Further, as Campbell was quick to point out,

“Just a month ago, in December, Sushiswap was processing an average of 25% of Uniswap’s weekly volume. Now, the protocol is averaging 48%. It’s nearly impossible to deny the trend: it’s up and to the right.”

At the time of writing, Uniswap continued to hold the upper hand with respect to the liquidity available within the protocol. Thanks to the UNI airdrop during which the protocol distributed 15% of UNI’s supply to previous users, LPs came flooding in, especially after the initial Sushiswap craze had faded away. Right now, Uniswap’s liquidity overshadows Sushiswap’s, despite the fact that the former is now completely unsubsidized by its protocol.

This doesn’t mean that SushiSwap can be ignored, especially since its own liquidity has been on the rise too, with the same climbing over $2 billion recently.

On the question of revenue too, Uniswap seemed to hold the upper hand, with the protocol averaging over $3.28 million in daily fees, when compared to SushiSwap’s $1.43 million. A closer observation of the charts, however, would agree with Campbell’s findings, namely, “the trend is tough to ignore: Sushiswap is chipping away at its competitors.” 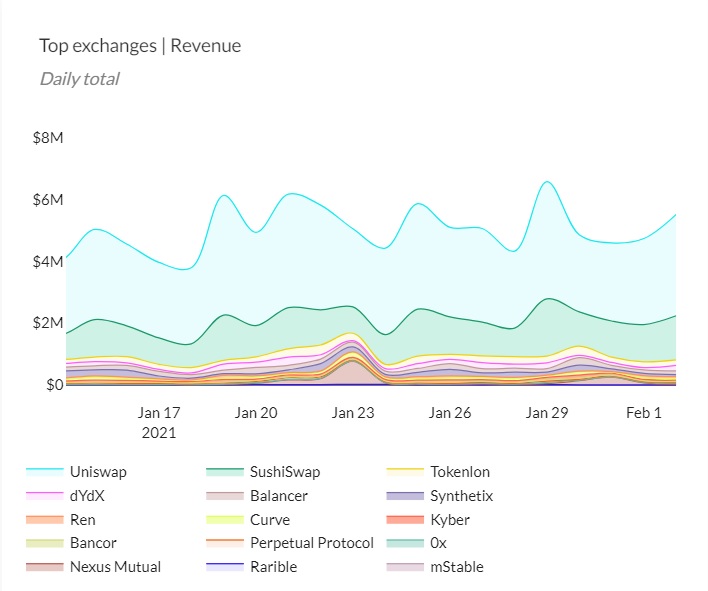 There’s also the matter of how a protocol is valued. According to Token Terminal, “Sushiswap has been holding steady with a P/S ratio of ~5 while Uniswap recently touched ~15.” What does this entail? Well, while it would seem that the market is overvaluing Uniswap relative to SushiSwap strictly in terms of the cash flows it generates today, it does not mean that one is overvalued while the other is undervalued.

Simply put, taken alone, this metric doesn’t reveal much since it doesn’t look into aspects such as a token’s economic design. The findings of the P/S Ratio, therefore, are open to interpretation.

This is the case with the P/V Ratio too, with Campbell noting that a cursory observation of the charts would reveal that a user is getting a better bang for their buck on SUSHI, and not UNI. Alas, here too, a lot of other factors like growth expectations and take rates come into play. 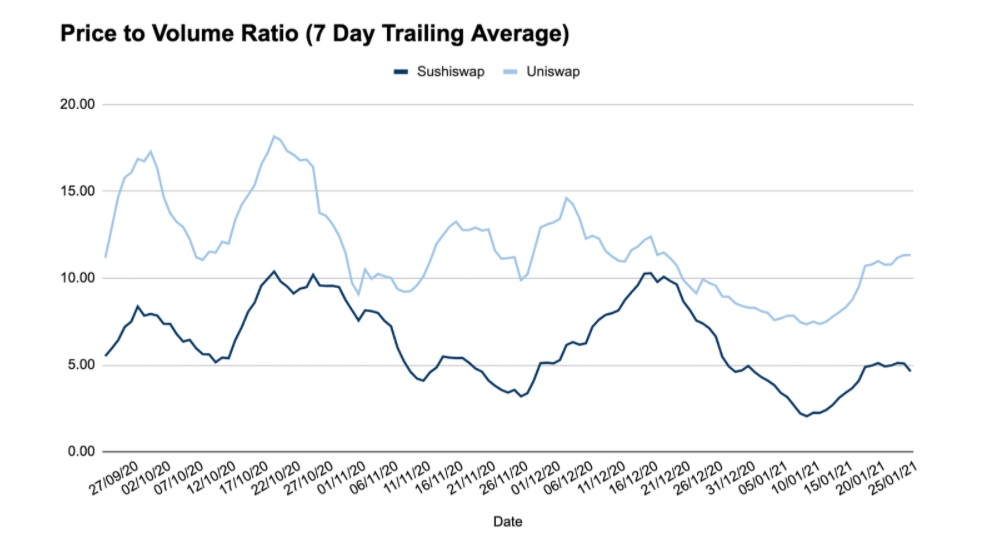 Ergo, what can we ascertain from the aforementioned analysis? Well, Uniswap remains the king, but SushiSwap is continuing to chip away at the former’s market share. The latter is doing so with the help of not just well-timed releases like Bentobox but with organic developments like the merger with the Yearn ecosystem. In fact, the same was stressed by Messari’s Mira Christanto when she tweeted,

This does not mean that Uniswap doesn’t have its own set of developments behind it or updates to look forward to. In fact, the protocol’s token UNI just came off the hike that followed the token’s listing on Coinbase. Finally, its community is also looking forward to the release of v3.

What then? Well, the situation can be best summed up by what Campbell said,

“I believe Sushiswap is growing the pie for Uniswap and vice-versa. Big picture: it’s true these protocols compete, but it’s even more true that they benefit one another.”

Chainlink: Should the LINK marines be worried about these indicators