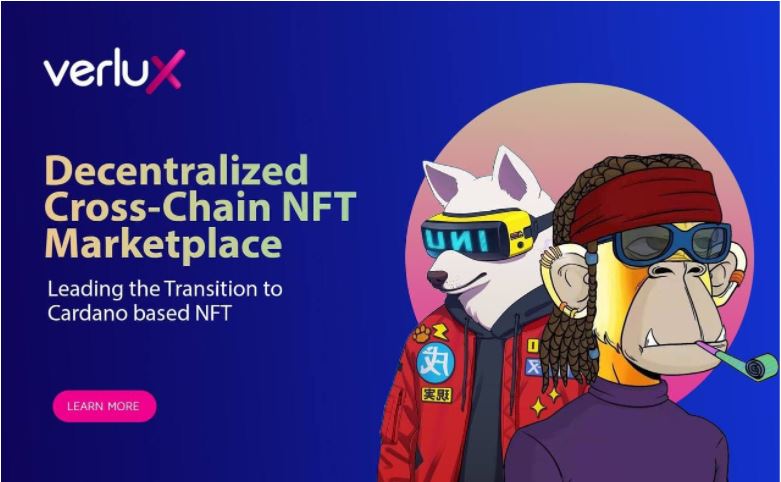 Verlux has been garnering a lot of momentum since its conception. The widely adopted Cardano-based project has been fast-paced in its full project development as the Project has released a video of their NFT Marketplace which will be fully functional before the end of Q1 2022.

The video of the NFT Marketplace can be seen on the Verlux YouTube Channel.

This announcement comes as the project commences its Public Sale with 150 million VLX allocated for the sale. This will be the last sale prior to the exchange listing for the massively adopted project. Users wishing to join in the public sale can do so by visiting the Verlux token sale page.

Unlike other existing NFT platforms, Verlux prides itself in its novel feature of a Cross-Chain Swap protocol which allows users to swap NFTs existing on other blockchains to the Cardano blockchain while retaining the authenticity of its data and utilizing the low transaction cost, security, and speed of the Cardano blockchain.

Verlux is creating a marketplace that will disrupt the conventional NFT system, integrating a staking platform where users can farm special edition and 100% exclusive NFTs, this novel protocol is one of the features that is making Verlux stand out amongst other NFT marketplaces as it is one of the first projects on the Cardano network to do so.

The Marketplace will boast of a Bid or Outright purchase option, leaving room for creators to allow the market to place a value on their contents or directly place a price on their NFTs.

On full launch, Verlux is working to be the go-to NFT Marketplace of the Cardano Network and beyond.

$VLX is the utility token of the Verlux, the token will power transactions and various utility functions through the Verlux ecosystem. With a total supply of 1 Billion $VLX, token holders will be able to perform various utility functions such as Stake To Earn VLX and Also Stake To Earn Featured NFT Drops, Transaction fees on the Marketplace, Featured Listings, Creator Profile verification and ultimately will serve as a governance system for Verlux Ecosystem on further developments.

With carefully crafted tokenomics, holders are from the sales are poised to be in a good position following the exchange listing that comes immediately after the Public Sale.

How to Buy VLX

VLX Public Sale is Live now!! Early birds who wish to acquire some $VLX tokens at the Public Sale before Exchange Listing can do so by visiting the $VLX Sale Page.

A sharp bounce for NEAR is well and good, but where’s the demand