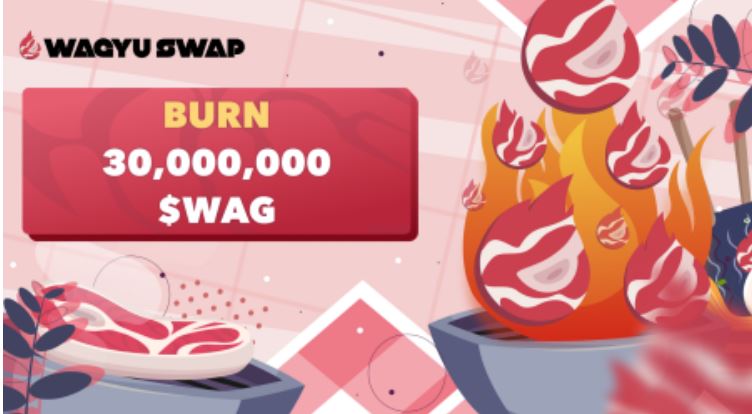 Just 8 days after WagyuSwap, the world’s fastest and cheapest decentralized exchange built on the Velas Network announced the Great Steak Event, the team announced yet another periodic token burn initiative of 30,000,000 of the platform’s native $WAG token.

The burn will deplete the total supply by 7%, bringing it back down to 500,000,000. The burn announcement was made on Thursday, December 9th prior to an ask me anything (AMA) session with Velas COO, Shirly Valge. Chef Ramsey stated;

“The WagyuSwap community members who are staking are still seeing crazy returns with some of the pools returning over 800%.” He continued:

“We plan to roll out even more steaking initiatives in the nearest future.”

WagyuSwap’s burning occurs when the tokens are intentionally sent to an unusable wallet to remove them from circulation. These wallets aren’t assigned to anyone, and thus once a token/cryptocurrency is burnt via the wallet, it’s gone forever. The WagyuSwap burn mechanism is set up to offset the smart contract’s minting, reducing inflation and removing existing tokens from circulation.

Back in November the WagyuSwap team already burned 2,000,000 $WAG, so it’s clear that the Chefs will continue to burn DEX’s native tokens. Chef Ramsey also stated:

“We will continue to innovate in the DeFi space, by rolling out new features, steaking and farming pools, as well community-based events and competitions, partnerships with various high potential projects and of course the continuous burning of $WAG”

This exciting news comes out just over a week after the team announced their Great Steak event, whereby staking $WAG earns token holders various other tokens such as $SCAR, Valhalla’s Metaverse token, and most recently $ASTRO, a Cardano-based decentralized exchange which is expected to launch before the end of 2021.

With a deflationary mindset and so much in the works for the project, it is clear that 2022 is shaping up to be a big year for the decentralized exchange. To find out more about WagyuSwap, visit the website.