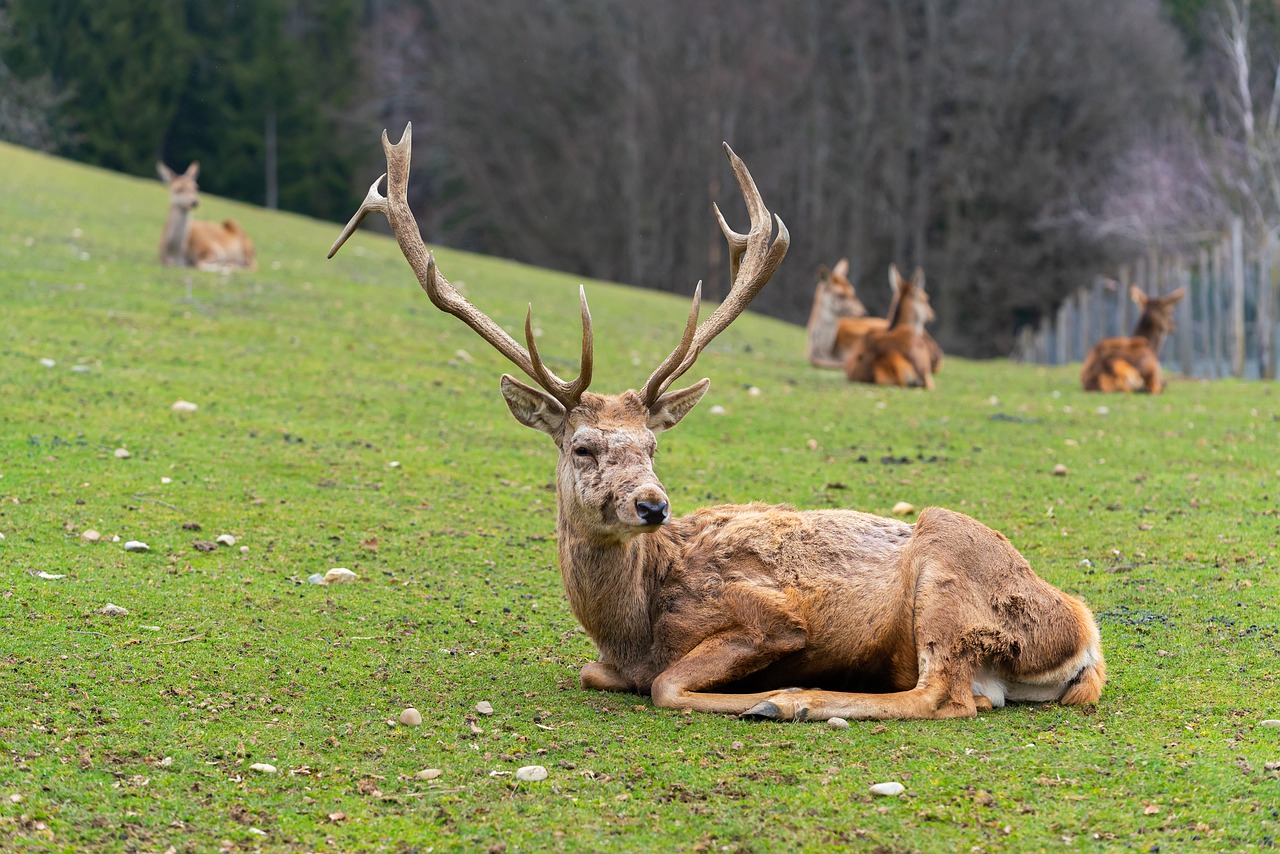 At the time of writing, both Bitcoin and Ethereum had registered new ATHs on the charts, with the two cryptos expected to note higher highs in the next few weeks. In fact, the past month has been quite an impressive year for both coins in terms of price action.

Bitcoin has recorded a hike of over 14-15 percent since the start of the month, while Ethereum has appreciated by an impressive 36%. Now, what if BTC crosses $65k and ETH breaches the $2,500-mark? What then? How much scope is there for future price discovery or are both coins working their way up to yet another price correction? 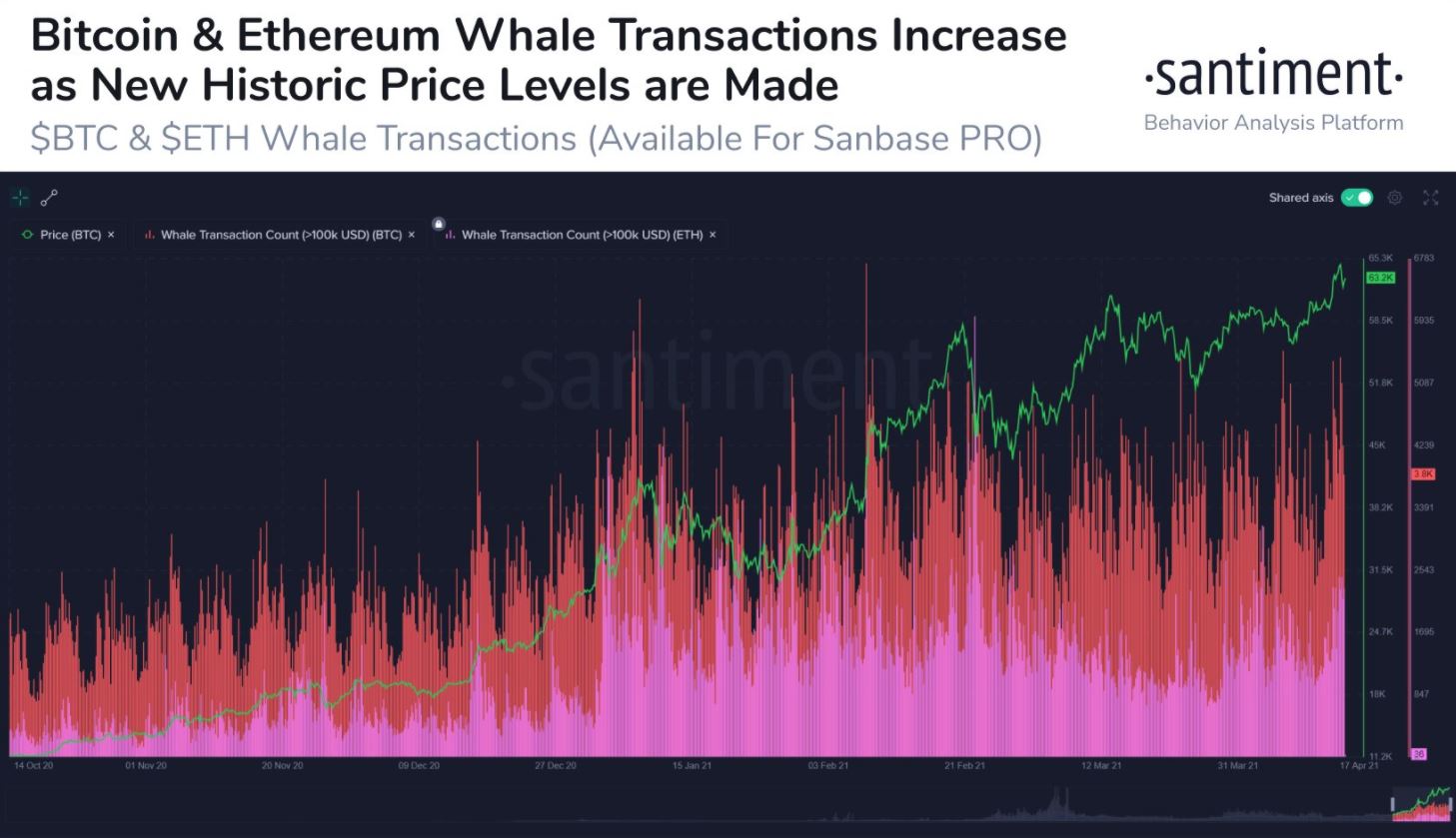 Data provided by Santiment illustrated some of the key drivers behind this renewed bullish momentum. According to the data, there has been a very noticeable surge in activity coming from the market’s whale accounts. Santiment highlighted how Bitcoin has seen quite a few occasions during which there have been very high spikes of transactions amounting to over $100k.

In the case of Ethereum, while such transactions over $100k have been relatively less, there seems to be steady growth over the past week wherein whale accounts were active.

While whales entering the two largest cryptocurrencies’ markets with a prominently bullish outlook can be quite beneficial and may even help the price with its aspirations, it could also make the market quite volatile and even lead to short-term price corrections. Price levels beyond a recent ATH are always prone to corrections, and this can be seen even in prior cases where BTC went past key levels.

However, the confidence investors have in BTC’s long-term prospects has helped and enabled the coin to secure strong bouncebacks. The latest dip to the $52k-level and the move back to levels close to $60k over the past few weeks is a case in point.

What’s more, data from Glassnode highlighted that the number of unspent transaction outputs (UTXOs)  in profit (7d MA) just climbed to an ATH of 121,531,015.327. 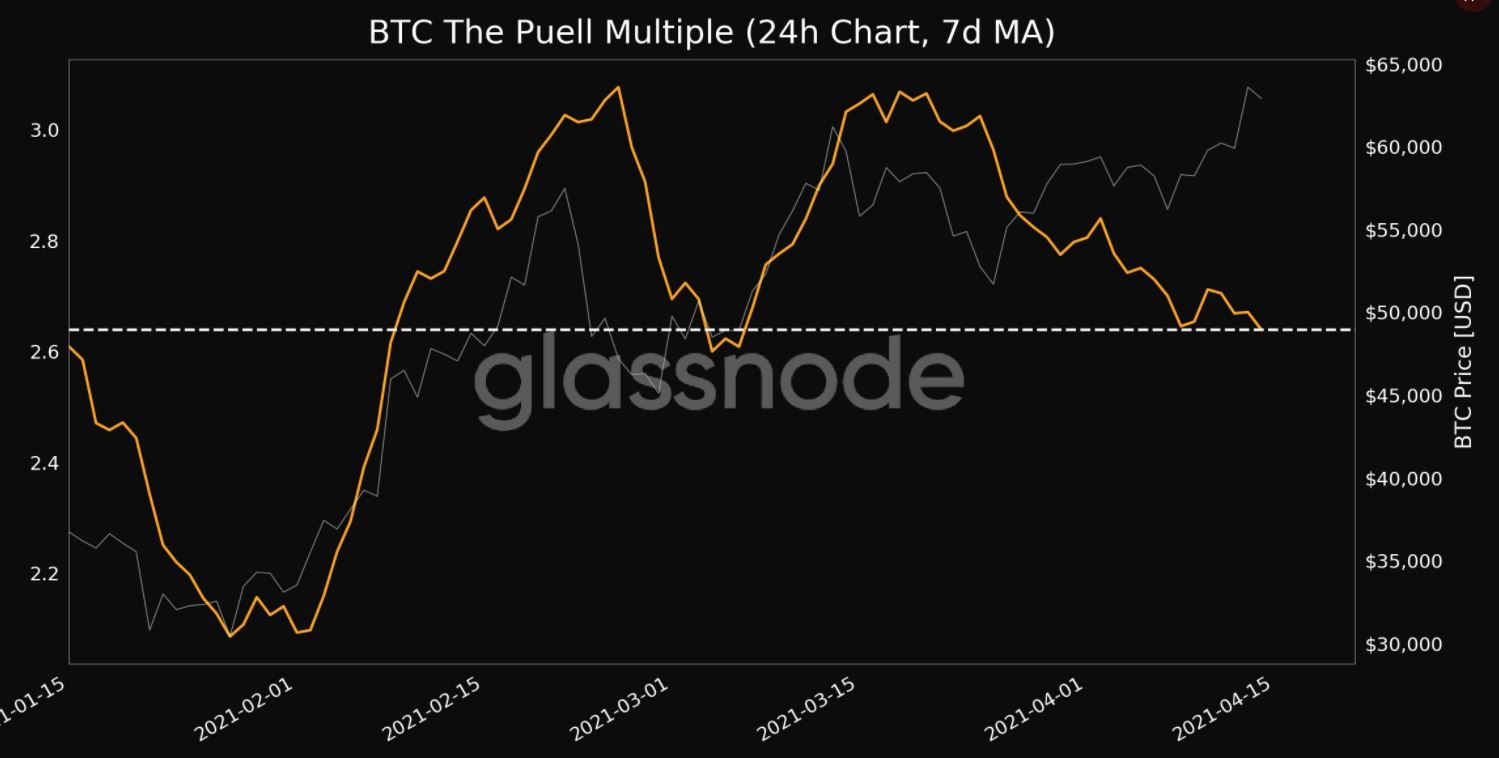 Interestingly, and in addition to this, the Puell Multiple that takes into account the daily issuance value of Bitcoins (in USD) and divides it by the 365-day moving average of daily issuance value hit a 1-month low of 2.640. The last time such a low was registered, it led to a surge in price for Bitcoin.

Over the past few days, BTC has also seen a dramatic rise in transaction volume and these fundamentals all suggest that the price is likely to reattempt a breach of the coveted $65k-range.

However, this puts Ethereum at an interesting crossroads. While the upward momentum and the coin’s bullish aspirations aren’t hampered, ETH’s high correlation with Bitcoin once again keeps its fortunes closely tied to that of Bitcoin. While the coin isn’t seeing as much activity from its whales in comparison to Bitcoin, its post-ATH price discovery may be stronger.

However if one were to take into consideration the overall trend in the altcoin market, ETH cannot really hope to be immune from a price correction once it breaches $2.5k if Bitcoin’s price sees renewed bearish sentiment.

Does it matter where Coinbase trades?