Alongside Ripple execs, many investors have not shied away from supporting XRP. Recently, XRP petitioners even claimed that due to the lawsuit against Ripple, former Commissioner Jay Clayton “knowingly and intentionally” caused “multi-billion-dollar” losses to XRP investors. They hoped to amend the SEC’s complaint about the status of XRP.

Regulators stated the investors cannot prove that crypto exchanges “will reverse course, or that XRP’s price will appreciate, should the Commission make the amendment.

Now, XRP supporters have taken to Twitter to urge crypto exchanges to “Relist XRP” a hashtag that has gone viral on the social media app. It was a top-trending topic in the Netherlands, with more than 35,000 tweets about the same.

The Twitter campaign #RelistXRP under which the XRP community is calling on crypto exchanges worldwide to relist XRP has managed to be “trending” in the US and in The Netherlands ??????????

Meanwhile, in US, Google Trends data recorded a surge in the ‘relist XRP’ search term, on 21 March. 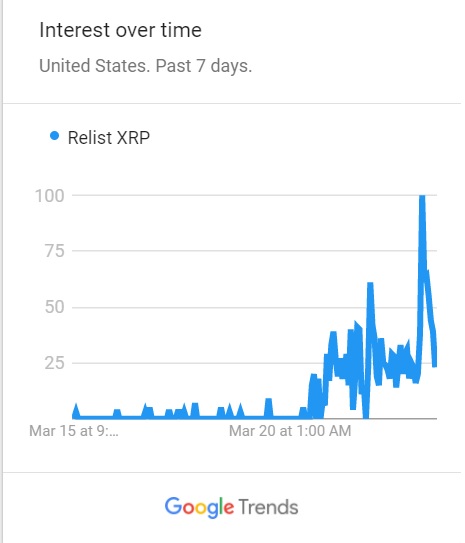 After the Commission filed the lawsuit against Ripple, one that primarily alleged that XRP is security, many crypto exchanges in the US delisted the asset, including, Coinbase. Other exchanges that removed the asset from their platforms are mentioned in this list according to an XRP community member.

A possible reason why XRP supporters have been actively attempting to make exchanges relist the asset could be due to new developments in the Ripple-SEC case. Earlier today, the judge questioned the SEC attorney that, based on his theory, “everyone who sold XRP – including you and me – are selling illegal securities”. The SEC lawyer responded, “no, under Section 4, only Ripple and affiliates of Ripple can have sold XRP illegally”, and that “everyone who sold XRP” was not selling “illegal securities”.

The statements by the SEC lawyer can be interpreted that exchanges based out of the US will not be held liable for the sale of XRP. However, only time will tell if the US exchanges “relist” the popular altcoin.

With regard to XRP supporters, this would not be the first attempt to defend Ripple’s native asset. Earlier, over 6,000 XRP holders petitioned to participate in the lawsuit as third-party defendants, a motion that was later dismissed.