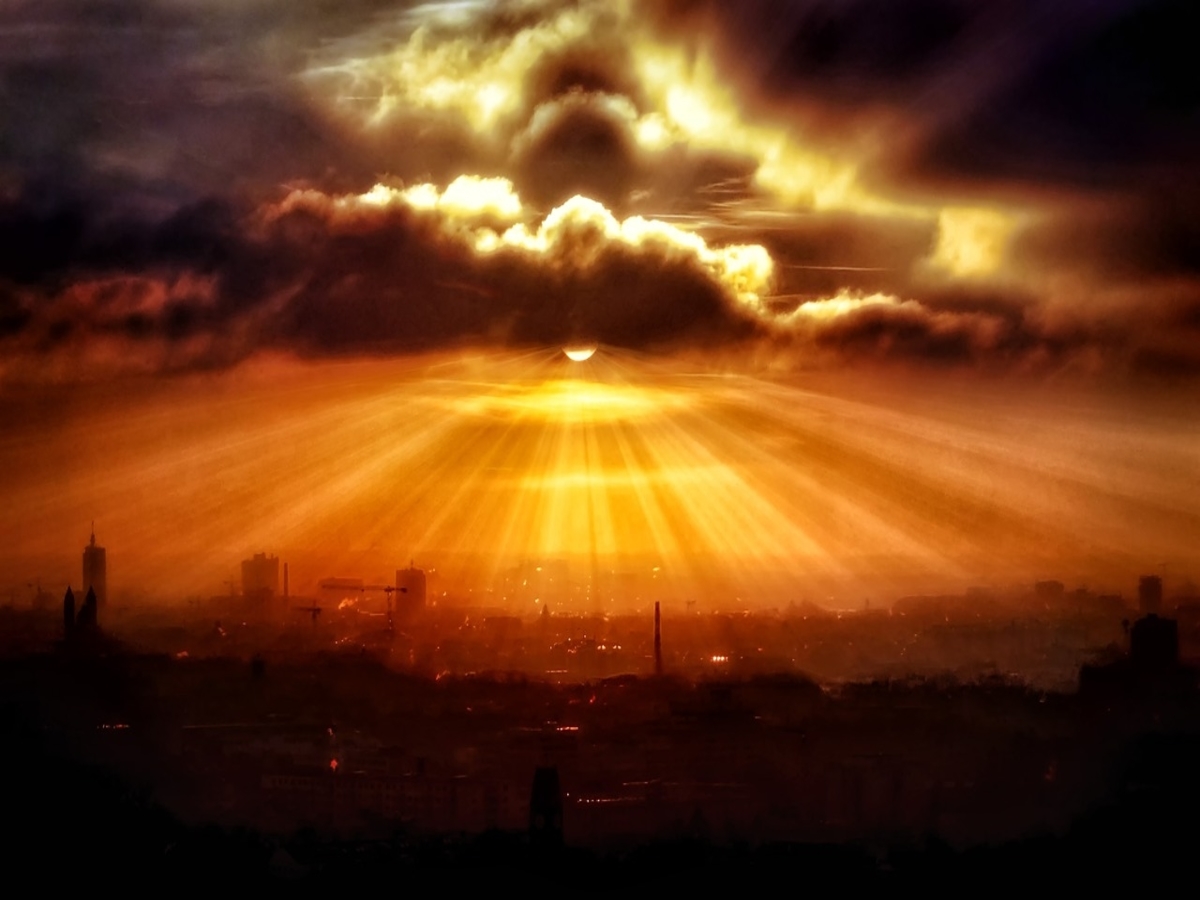 After a long-gap of three months, Bitcoin’s price managed to reclaim $50k on Sunday. However, the king-coin couldn’t sustain above that level for long. After dipping by 1.5% over the past day, BTC was trading at $49.5k at press time.

There rising concern in the market now, is whether Bitcoin’s bull run is still on or would this unanticipated correction phase end up prolonging itself, just like last time?

Bitcoin’s derivatives market depicted a clear-cut trend at the time of writing. Both the futures and options Open Interest, for starters, have been making new local highs. As depicted in the chart attached, the current futures OI stood at $17.03 billion. As such, the the open interest in this market rose by over $6.23 billion from the lows of the recent consolidation. Curiously, the past week alone witnessed an increase of $1 billion in futures contracts.

The options market has also simultaneously recorded multi-month highs in OI. The same has risen by close to $4 billion (105%) since the lows set in June. The aforementioned data essentially implies that additional money has been flowing into the Bitcoin market, despite the price deviation. 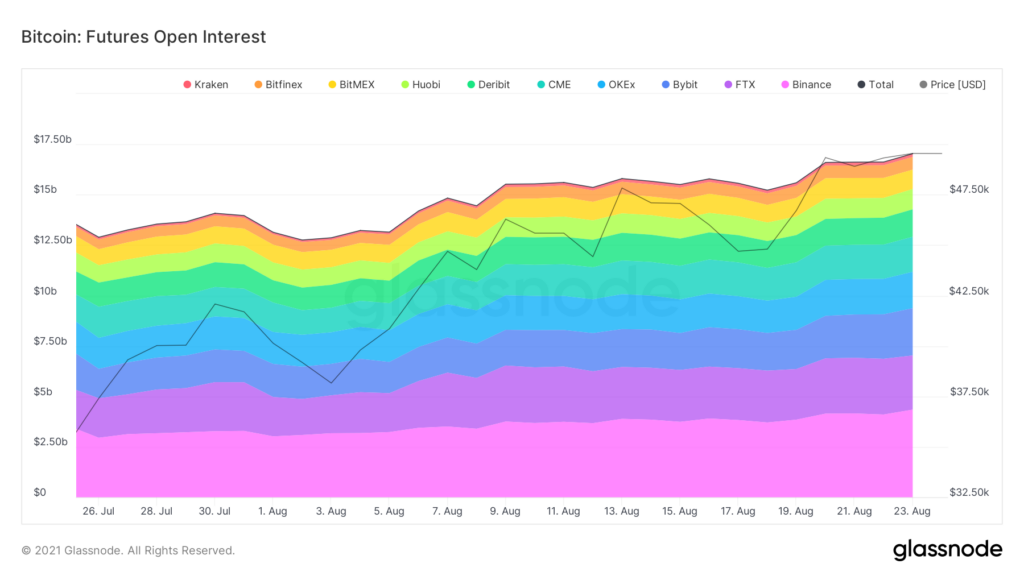 Is there a reason to panic?

The balance on exchanges witnessed a gradual surge for most part of the week. Glassnode’s Exchange Net Flow metric highlighted that the inflows had largely overshadowed the outflows over the past 7-days. This essentially means that traders have been taking profits and capitalizing on the market’s strength.

Interestingly, the magnitude of inflow at this stage, is quite congruent to that witnessed during the December 2020 – April 2021 bull market phase. 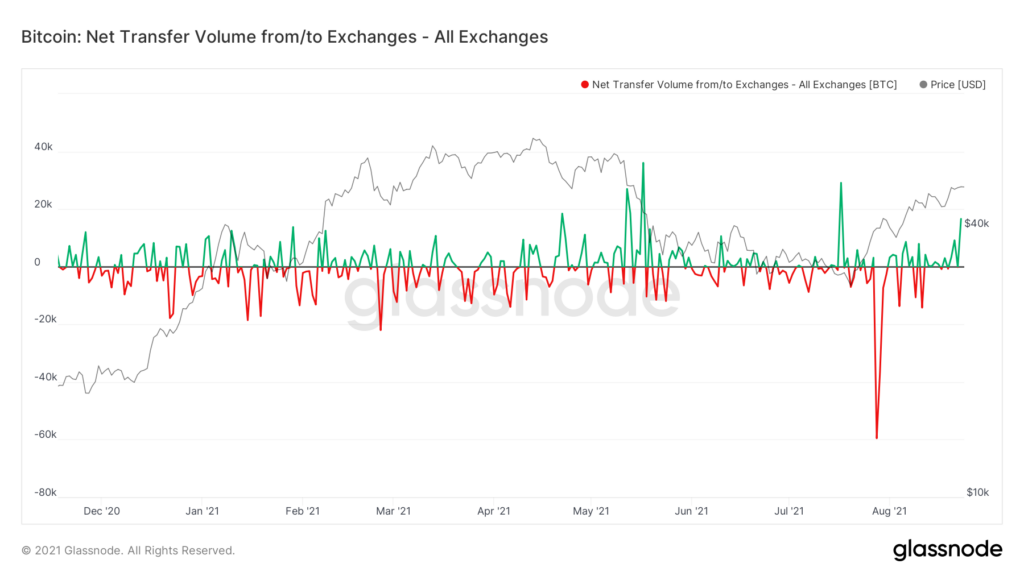 Well, apart from the speculators who managed to reap the benefit of high prices, it should be noted that the whales chipped in too. The aforementioned claim was sustained by CryptoQuant’s exchange whale ratio. As such, this ratio takes into account the relative size of the top 10 inflow transactions and compares it to the total inflows.

The Exchange Whale Ratio remained below 85% most of the time, during bull markets. On the other hand, it rallied above the aforementioned level during past bear markets and fake bullish breakouts. For context, post the flash crash period in May, this indicator kept making strides above 85%, but the trend has gradually been changing of late. 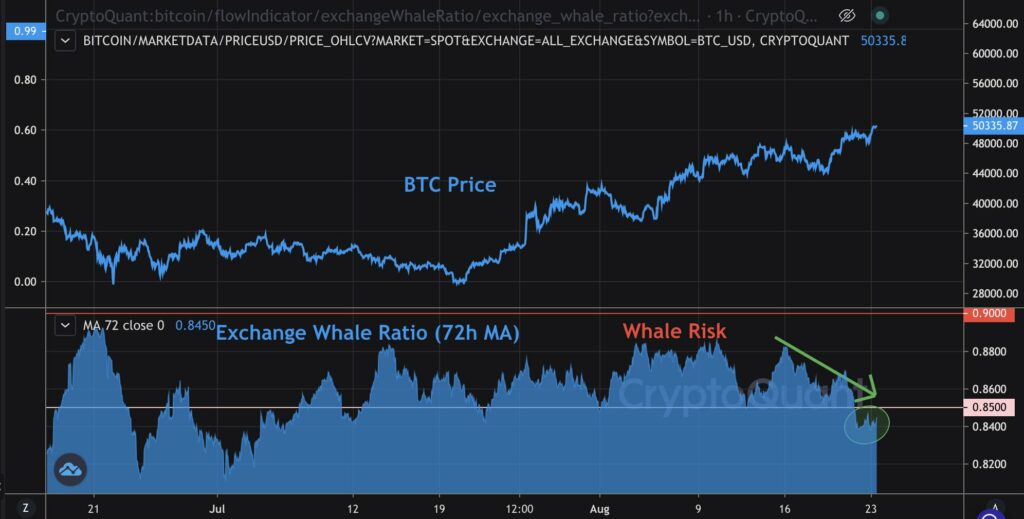 Now as seen in the chart above, BTC’s price was surprisingly rallying amidst this time’s inflow phase. Bitcoin, arguably, did not have much problem digesting the exchange inflow led by whales. The price defied the usual trend, by and large, and this portrays the strength of the current macro-rally.

With the Exchange Whale Ratio back below 0.85, the environment has become even more favorable to sustain the king-coin’s rally.

Furthermore, at the time of writing, as per Bitcoin’s coin maturation chart, the conviction to HODL was quite strong. If the trend continues in the same direction in the coming days, it would most likely contribute to Bitcoin’s supply shortage. Bitcoin’s price would eventually end up hiking and the current deviation will likely nullify itself.

Looking at the aforementioned aspects, and keeping in mind how things have played out in the past, it wouldn’t be wrong to state that Bitcoin’s macro bull run is still on. The market, at this stage, is merely witnessing a cautious pullback in the micro-frame.

Related Topics:Bitcoin correctionBitcoin rally
Up Next

XRP, Litecoin, Chainlink: Which alt is more likely to outperform the others