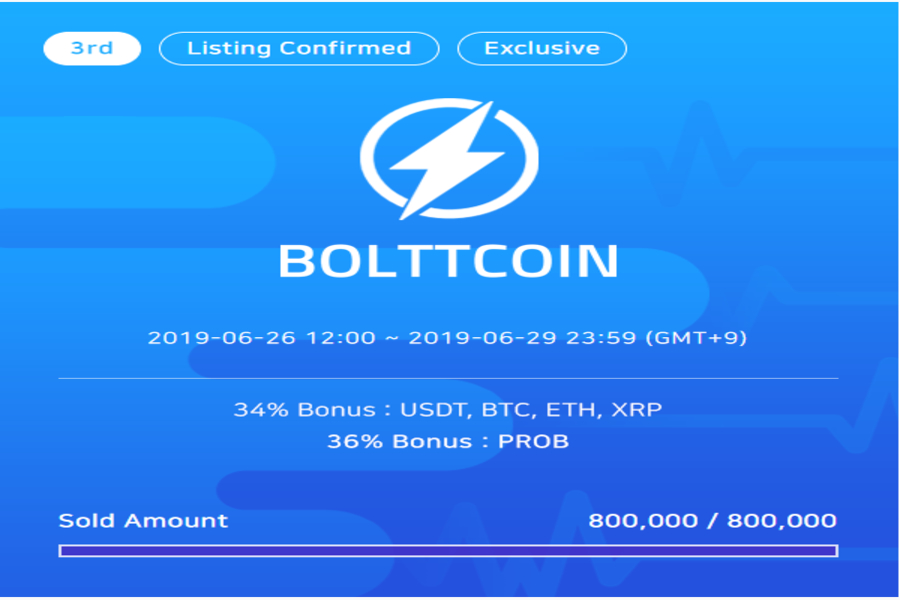 On June 26, ProBit Exchange sold out all 800,000 BOLTT during Round 3 of  Boltt Coin IEO to wrap up a perfect 3 for 3 with three consecutive IEO sellouts. The stellar results helped the health gamification blockchain project raise a stunning $678,000 as they continue to ramp up their social-health objectives centering around an incentive-based app that rewards users for undertaking physical challenges.
Amidst considerable hype by local and global investors, Round 1 completed almost instantaneously within just a second. A few hours later, Round 2 was launched and met with even greater demand as investors quickly claimed the increased allocation of 500,000 BOLTT in a matter of two seconds.
Within the span of just 3 seconds, ProBit Exchange managed to successfully raise $278,000 for Boltt Coin. The project had already generated major interest through significant partnerships with Kakao subsidiary Klaytn which has announced its upcoming mainnet release along with BCryptos, a Japanese blockchain investment firms backed by a top local VC.
The momentum carried over to the launch of Round 3, which went live June 26, resulting in a quick sellout of all 800,000 tokens and raising yet another eyebrow-raising $400,000 to wrap up a rare sold-out IEO trifecta.
The incredible achievement marks yet another standout IEO campaign throughout their 70+ total IEO rounds conducted so far. ProBit Exchange previously sold out 3 consecutive rounds for Spin Protocol back in March, raising over $500,000 behind the furious pace set from the getgo with $130,000 raised in round 1 in less than 3 minutes.
Ronald Chan, Director of Partnership for Probit Exchange shared that the ability for Probit Exchange to bring in foreign teams to Korea to raise hundreds of thousands is attributed to the track record of IEO on Probit as well as the extensive marketing that Probit Exchange does for IEO projects.
LINIX, Steemhunt, and CLINK are among other projects who saw their IEO campaigns quickly sell out to maximize their initial investments and secure considerable funding for further development.
A steady and increasing stream of projects continues to flock over to acquire the highly sought out IEO expertise of one of the top IEO platforms in the world, a significant achievement for the young exchange who has already rivaled the industry giants in just 7 months of operation.
About ProBit Exchange
ProBit Exchange has completed almost 60 rounds of IEO and has amassed a solidified reputation over a short 6-month span since the startup’s launch. They have conducted multiple rounds of sell-out IEOs and raised millions in the process while refraining from any form of wash volumes or misleading figures. Please visit the IEO page to view the simple, efficient user interface.
ProBit Exchange has also introduced new features such as an ongoing trade mining and stake mining beta service, PROB staking for users to earn discounted trading fees, a referral program that provides 10-20% in further transactions fee savings, as well as a newly released app available on Google Play.
ProBit Global
ProBit Korea
IEO at ProBit Exchange
Many projects place their trust in ProBit Exchange’s IEO platform as we are a one-stop exchange for:
1) Fund-raising – Stellar fundraising track record including over $500,000 raised over three rounds for Spin Protocol, $53,000 in 6 seconds for LINIX, and $60,000 in 11 seconds for Steemhunt.
2) Listing – Instant liquidity against fiat and crypto pairings. Korean Won and USDT. Mild MM included
3) Marketing – Comprehensive services including marketers, marketing agencies, social media marketers and news agency on retainer. View a sample marketing campaign that we conduct for IEO.
Interested projects should fill up this form to start the due diligence process.