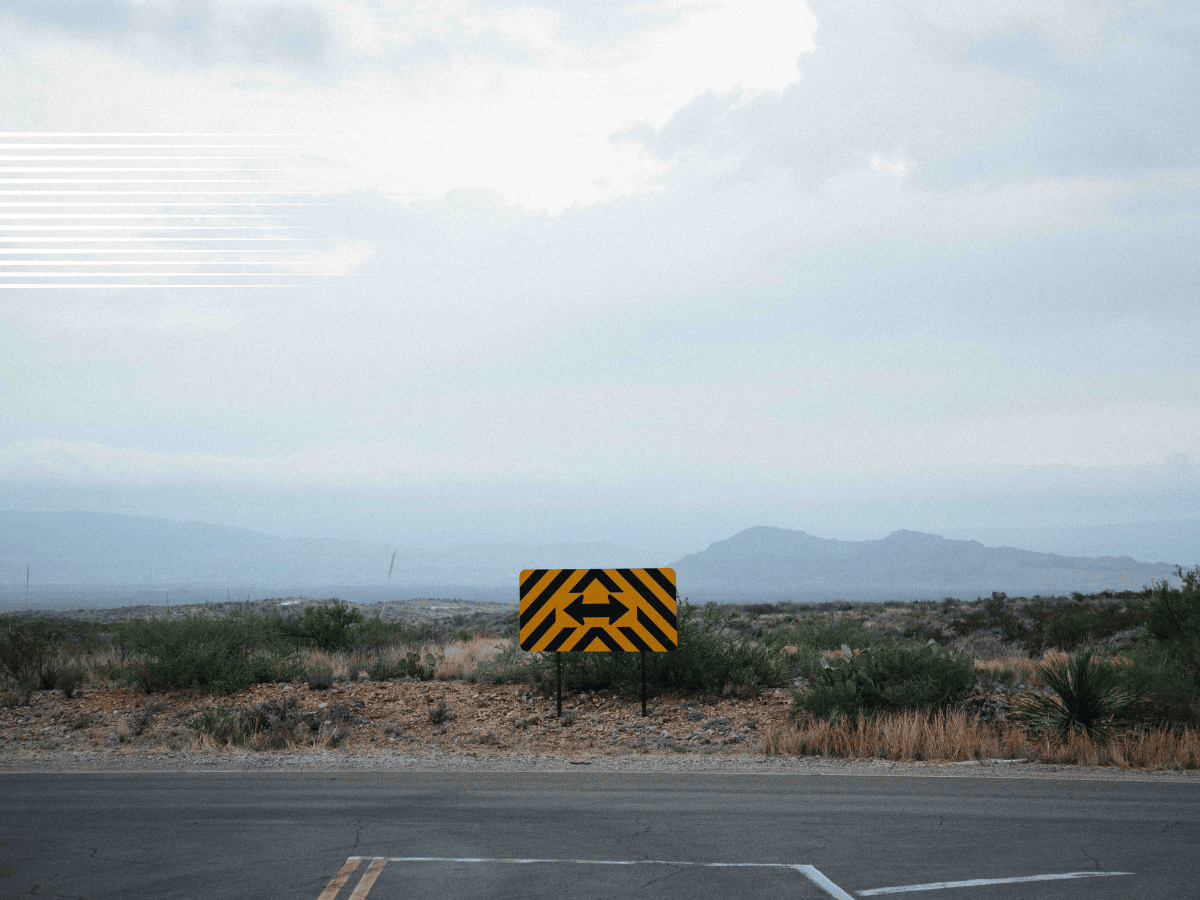 Algorand’s [ALGO] social engagement hit 12.78 million on the hourly clock as LunarCrush reported that the ALGO was gaining massive attention than the usual.

This out-of-the-ordinary increase seemed proof for ALGO enticing a big part of the crypto community. According to the crypto social intelligence platform, ALGO did not only rise at the hourly ends. The engagements also led to a 1,220% spike over the social status of the previous seven days.

An alpha to lead the pack

Interestingly, it looked like the social influence did not end with a “talk is cheap” mode. This was because the discussion around the decentralized-traditional finance bridge translated to a price increase. According to CoinMarketCap, ALGO was trading at $0.32 — a 3.23% surge in the last 24 hours.

The price uptick made ALGO ‘one of the stand-out’ cryptocurrencies since the wider market sentiment was mostly negative. Additionally, the FIFA world cup drawing near could also have contributed to rising interest. Recall that five months back, Algorand had confirmed that it was one of the sponsors of the much-anticipated football events.

On the charts, ALGO  was showing signs like it was time to double-down on holding the coin. Indications from the Bollinger Bands (BB) showed that ALGO could experience extreme volatility in the coming days. In this case, a further volatility spike could help increase the current ALGO price.

Per the Moving Average Convergence Divergence (MACD), ALGO’s momentum seemed to be grabbing the positive levels. At press time, ALGO buyers (blue) were in control at 0.0006. For sellers (orange), the -0.0008 position was not enough to draw down the buyers’ dominance. Hence, it was likely that ALGO could maintain the bullish streaks in the short term. 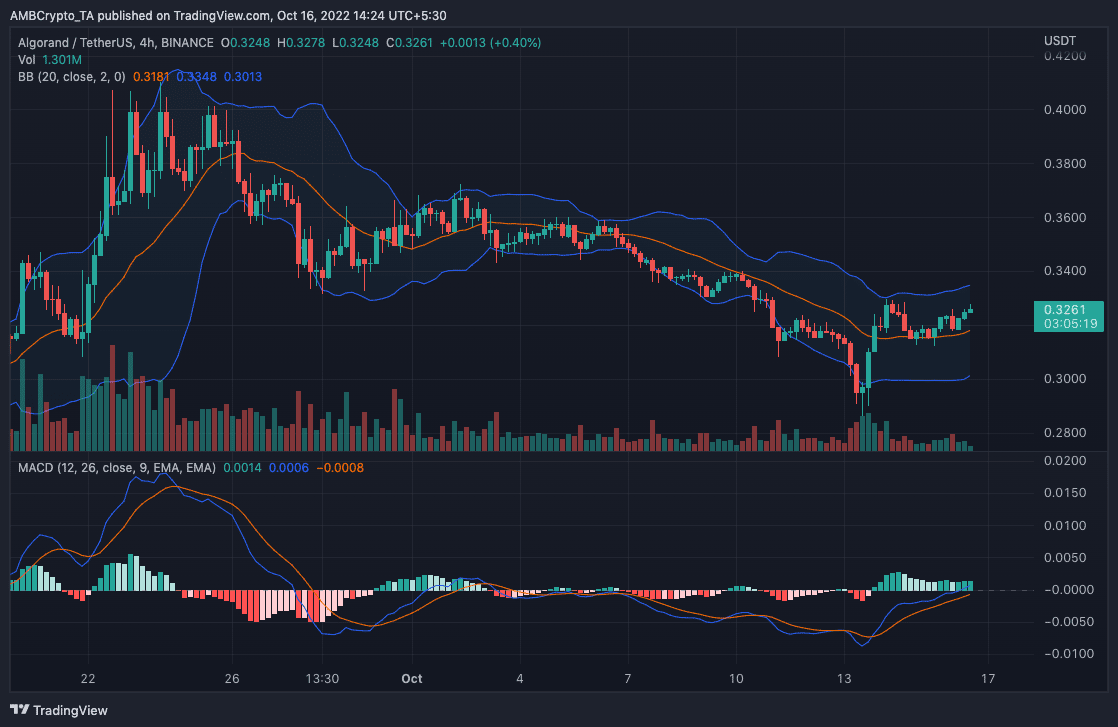 On-chain, it was no surprise that ALGO addresses had tremendously increased. According to Messari, active addresses on the ALGO chain only hit 15 million in the last week of September. However, data showed that an extra 200,000 holders have added ALGO to their holdings. 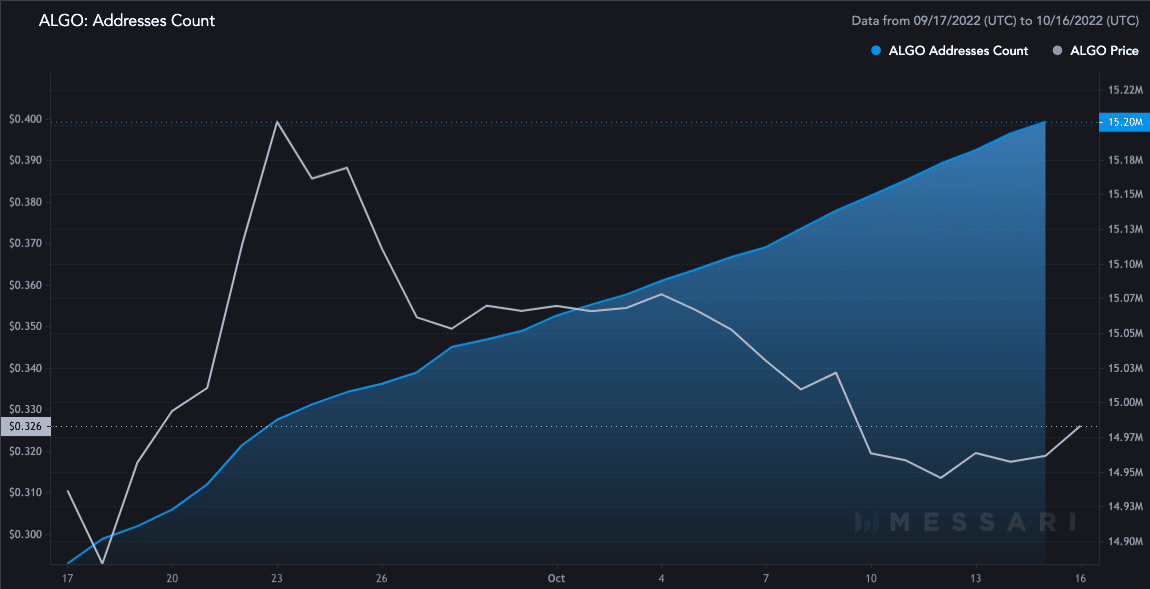 However, it was possible that ALGO investors were putting in much pressure to accumulate the cryptocurrency. Santiment revealed the 24-hour trading volume which spiked to 165.04 million on 14 October had decreased to 63.88 million as of this writing. However, with the volume picking up a 1.44% one-day increase, ALGO could possibly rise to the former state depending on the buying pressure.

XRP retains a bullish bias on higher timeframes, where can traders look to buy

Cardano: This development may offer much-needed comfort to ADA traders