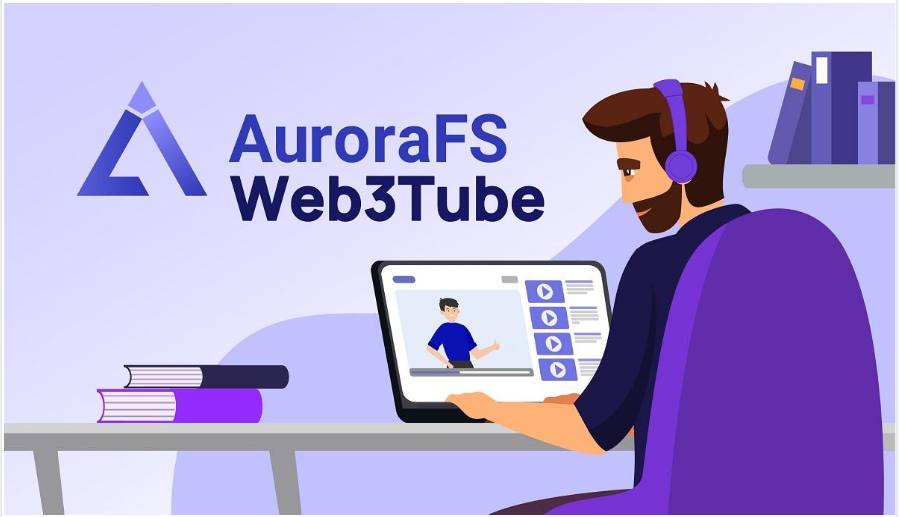 AuroraFS P2P cloud storage and distribution system are preparing for the approaching public launch of its Web3Tube in full capacity. The AuroraFS Web3Tube platform is being heralded as the first fully decentralized media content streaming network of a commercial standard. Web3Tube has an emphasis on efficient video storage, as well as seamless sharing and streaming in HD playback quality.

Amongst the advantages presented by the Web3Tube innovation, quite a few have direct implications for content creators. The Web3Tube by AuroraFS plays a role in actively giving power and control back to the content creators. This detail alone addresses and draws upon the deeper meaning and purpose that decentralization looks to address and effectively adjust in a positive manner and direction.

Not only is the AuroraFS Web3Tube an effective platform to give creators and even novices who are simply experimenting or just having fun, the ability to own their own content exclusively due to the nature of the underlying Web 3.0 foundation, but it also works to give them control in additional ways.

Web3Tube gives content creators the ability to determine the costs associated with downloading any piece of content distributed on the fully decentralized network. Creators set the cryptocurrency rates for their community of subscribers who follow their accounts on the Web3Tube platform.

Web3Tube empowers creators to determine their own value

Content creators control their own monetization within the Web3Tube decentralized platform. Perhaps even more importantly, the value of content shared with others is set and established by the creator of it. Value is what decentralization looks to recapture and redistribute back to the individual wherever possible. This allows the creators of products, services, virtual and intellectual property, and so on, to own the right to set their own standards and prices. This is part of what the decentralized market was created to provide.

There are no costs associated with streaming videos on Web3Tube when individuals engage in watching content on the network. This brings up another point that is important to note for underlying benefits, and moreover advantages inherently existing on Web3Tube. In all actuality there are no costs whatsoever, associated with user accounts. Any user is able to access full functionality within the Web3Tube platform, including streaming, downloading, uploading, and sharing, and more, with no costs charged by the network. This specification positions Web3Tube as a potential competitive choice over traditional media platforms such as YouTube and Vimeo for example.

Beginning setup and operational use of Web3Tube

First, new users need to download the latest version of AuroraFS network located to the right of the dedicated project github profile page. Check for device specifications to ensure system requirements are met. The AuroraFS network is the underlying foundation used to run Web3Tube. Immediately following downloading the network, new users can also download the latest version of the Web3Tube application.

Upon logging in, Web3Tube platform users are able to scroll through videos populated to the homepage, check trending videos, or use the search bar at the top of the screen to seek out specific content of personal relevance and interest. Users are able to like, subscribe, or dislike content on the Web3Tube content platform while navigating through uploaded videos. The action items and terminology on Web3Tube are similar to other video platforms. Users are able to easily upload videos by selecting the option from their homepage. Web3Tube works seamlessly and provides a quality viewing experience.

The Web3Tube contests officially ended on April 23rd. A new campaign measuring flow energy was announced and began on April 22nd, for the AuroraFS active community. The flow energy campaign is a part of a combined series of competitions which have now ended. The non-staking broadband mining and two activity-based Web3Tube contests measured likes and new subscribers in order to reward top performers with future AUFS token airdrops.

Flow energy is a metric which increases as individuals watch more video content on the Web3Tube network. The greater the flow energy, the greater potential rewards will be shared by the top 200 individuals with varying flow energy values at the end of each 7 day campaign period. The activities are all going towards preparation for the dedicated Q3 AuroraFS mainnet and AUFS token launch. Additional campaigns, contests and news can be accessed on the official AuroraFS social media channels and the active Telegram community channel.