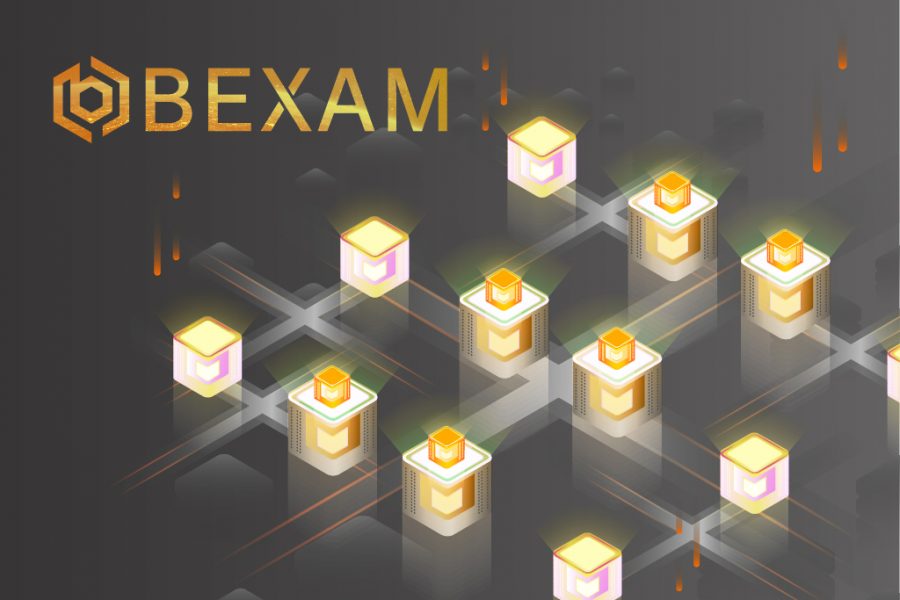 Amid a massive influx of blockchain solutions in the market, a new blockchain platform [previously introduced as an exchange] is trying to outdo them all. This new platform combines blockchain and DAG technology to achieve block times of 0.2 seconds and 40 million transactions per second [TPS].
These results come from a new consensus-building algorithm, Proof of Rounds [PoR], developed by their exclusive Japanese partner company, Early Works Co. Ltd. With Proof of Rounds, BEXAM is able to handle 40 million TPS, which surpasses those of major players like EOS [3,996 TPS] or even VISA [56,000]. As for implementation, BEXAM has set their sights on enterprise businesses looking for opportunities for improvement through blockchain.
Why did BEXAM rebrand?
Paulo D’Alberti, the Chief Marketing Officer of BEXAM, details that feedback received during conferences led to their refocusing efforts.

“[…] There seemed to be a general consensus from the vast number of people we met: our exchange alone wasn’t enough. The technology behind it was the star, but it was being disguised by an exchange that was good, but not enough that it could stand out above the rest of the exchanges now offered.”

This feedback led to some serious internal rethinking, where the BEXAM team had to find a way to better highlight their technology. After some serious thinking, BEXAM was reborn as a platform.
Where do these speeds come from?
BEXAM achieves its high speeds through a combination of DAG and blockchain technology. Within this technology is a hierarchy of nodes: Normal Nodes, Super Nodes, Master Nodes, and a Root Node. Each node group serves a specific purpose within the network, which enables its 0.2 s block time – instead of all nodes doing the same job, thereby increasing wait time, each node can quickly fulfill its role and move the transaction along to the next node in the hierarchy. The platform is also scalable through its DAG elements. As the network grows, so too does the number of nodes. This ensures that during times of heavy traffic, the appropriate amount of nodes are present to maintain the speeds of the system. Node roles and security are explained in more depth in the BEXAM Whitepaper and the PoR Whitepaper.
Through this new consensus algorithm, BEXAM is able to achieve speeds that surpass those of large-scale centralized networks. BEXAM says this is one of their strongest points for targeting enterprises.
Blockchain for businesses through BEXAM
Why is BEXAM targeting businesses?
D’Alberti explains that the blockchain industry is having a difficult time convincing the world why blockchain is essential in our society. By implementing blockchain into businesses first, BEXAM believes they can create a “trickle-down” effect: when the big influencers of the world find ways to adopt the technology, its uses and benefits will become more clear to everyday society. D’Alberti mentions that in addition to business solutions, “platform use for individual developers and programmers will be available in the first half of 2019.”
D’Alberti claims that BEXAM’s platform is an ideal option for businesses because it is a practical solution that is secure and cost-effective. With high speeds and scalability, its use for enterprises become abundant. And unlike centralized systems that are prevalent in the business sector, blockchain technology provides high levels of security and reduced costs through the elimination of middlemen and server maintenance.
Is high TPS the road to mainstream implementation?
D’Alberti claims that BEXAM can integrate into large-scale businesses in a variety of ways, meaning that blockchain uses will become more and more apparent. From this, blockchain’s place in society will become more clear, thus enabling its mainstream adoption. But is TPS really the bridge that has been missing for widespread implementation of blockchain?
D’Alberti is adamant that high TPS is essential.

“I am not saying that this is the only aspect that has been missing, but it is major.”

“40 million TPS is a lot, but ‘a lot’ is only correct in the mindset of where blockchain currently is. With BEXAM’s speeds and scalability, blockchain’s abilities can go beyond anything we’ve seen yet. Don’t think of BEXAM in the constraints of what blockchain has achieved already, but rather in what blockchain has not yet been able to achieve or even hoped of achieving. It is the possibilities that haven’t even been dreamt up yet that we are going after. This is where enterprises become our perfect match.”

D’Alberti ends with the question,

“what if you could go to any shop and pay with a single token? What if everything you do, transactions, payments, etcetera could be done through blockchain?”

“With where blockchain is now, it’s impossible. You can’t expect to initiate a transaction or payment, then wait five minutes for it to be approved. And when shops and platforms are handling millions of customers around the world, it is especially impossible. The ‘impossible’. That’s where we have our sights set.”

How can BEXAM change businesses?
BEXAM’s primary focus will be on tailor-made business solutions for enterprises everywhere. D’Alberti says that BEXAM will not be a one-size-fits-all approach, but rather a solution that can blend seamlessly into solving a business’s pain points. D’Alberti again stresses that this is needed to better uncover the different use cases of blockchain in large businesses everywhere.
How to get involved with BEXAM
By the end of 2018, BEXAM will also release a native utility token, the BEXAM token, and an exchange, the BEXAM exchange. The BEXAM token will also power the BEXAM platform.
BEXAM’s private sale is taking place from November 19-29, 2018. It will launch a public IEO at a later, undetermined date.

PrimeXBT: How to trade with 100x your deposit and earn more in a bearish market