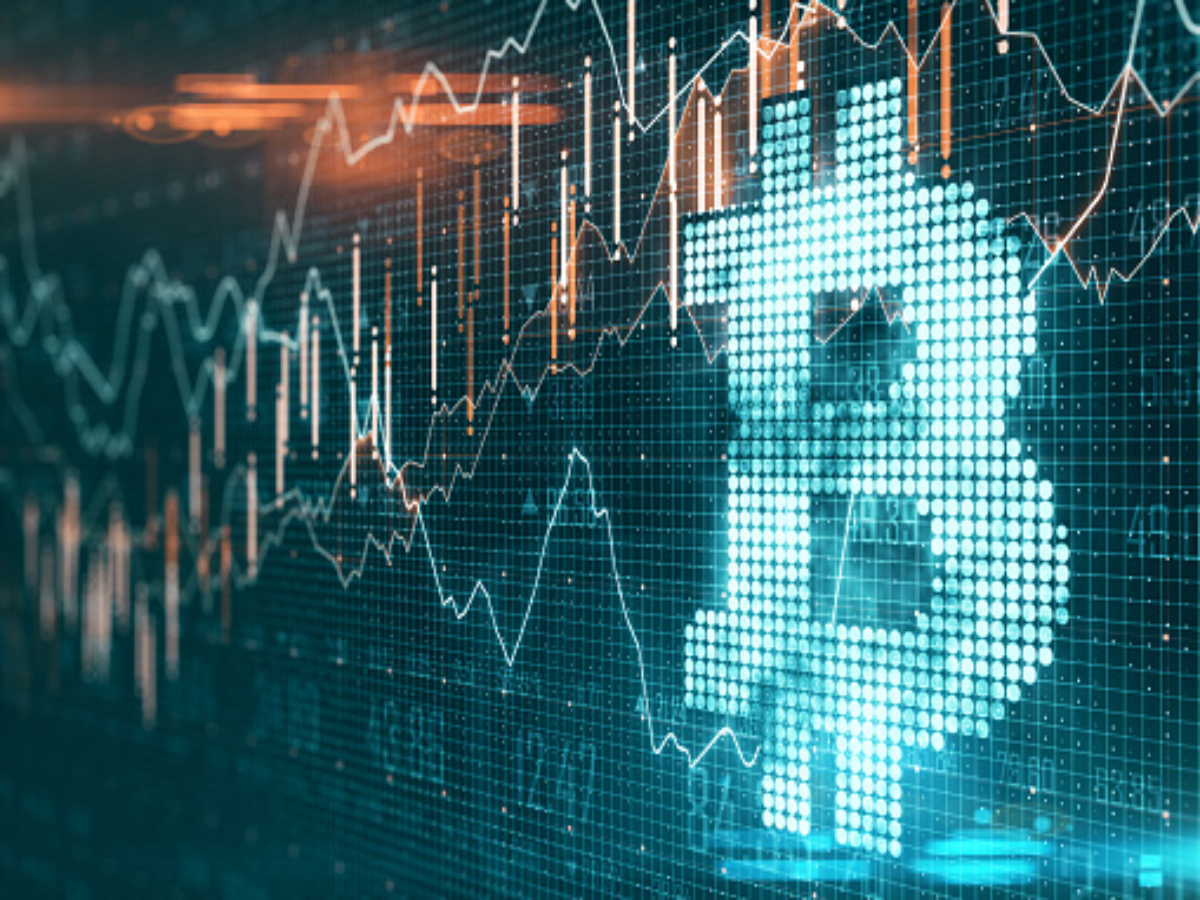 When it comes to crypto, everyone knows Bitcoin. In fact, Bitcoin is known much more widely than the word “cryptocurrency” itself. Since its inception, the concept of a decentralized financial system has taken everyone by surprise. And to watch it develop into what it is today is nothing more than a once-in-a-century instance.

However, as the understanding of crypto and participation grew, hundreds and thousands of new cryptocurrencies began appearing. Some of them failed disastrously while many others succeeded to become some of the topmost digital assets today. Naturally, people jumped in to invest in these digital assets and soon, a new kind of investment vehicle came to life.

But, there are always these few questions that people ask whenever the topic of crypto comes up – Is that it? Are Bitcoin and a few altcoins my only options to invest in? Is DeFi really worth it, etc.?

So, here I will be answering the question of what else and sharing with you the reasons why Bitcoin and altcoins are not the ends of the line. Instead, they might actually be the beginning of a new world of investment.

If we’re going to talk about where you could invest, it is important to gauge every existing kind of crypto asset. And for that, obviously, we need to analyze the topmost coins. The reason why people primarily rush to invest in cryptos is because of the ridiculous ROIs these assets offer.

Over the year, Bitcoin has seen a price rise of almost 77%, with its ROI for 1 year standing at around 161%, at press time. The market dip of 4 December definitely caused the king coin, as well as other altcoins, to fall considerably. In fact, Bitcoin even touched the $43k level at its lowest.

But, if you’re wondering why the ROI of BTC is so low, it is because Bitcoin still sits at a high price of $51k. Its rise and fall continue to maintain a tight structure, one that keeps volatility relatively minimal. 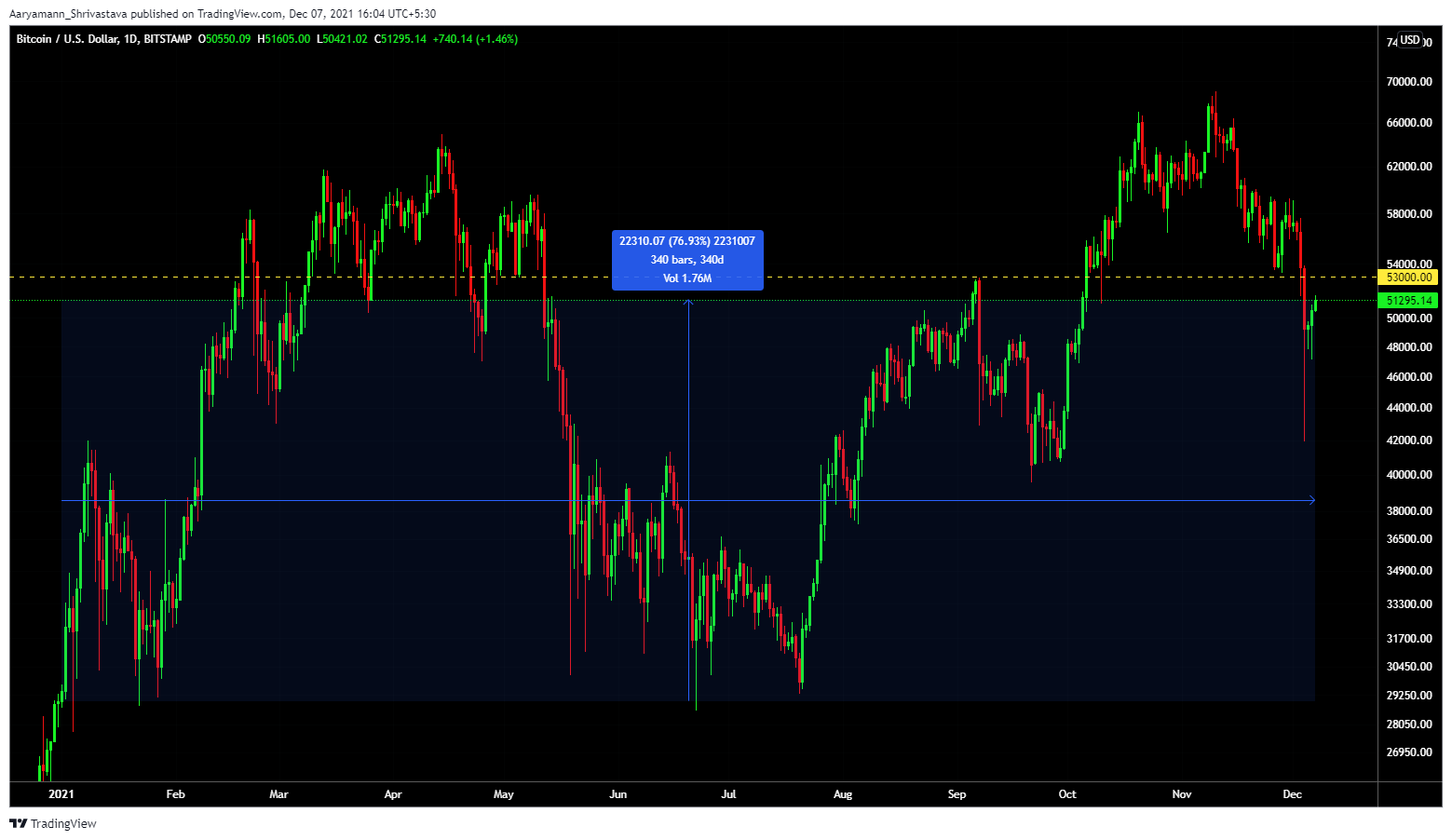 On the contrary, altcoins that don’t cost as much did go berserk this year. Ethereum performed really well as its price shot up by 501.8% while its ROI was 620% at press time. And yet, it still has nothing against the biggest hit of 2021 – Solana. 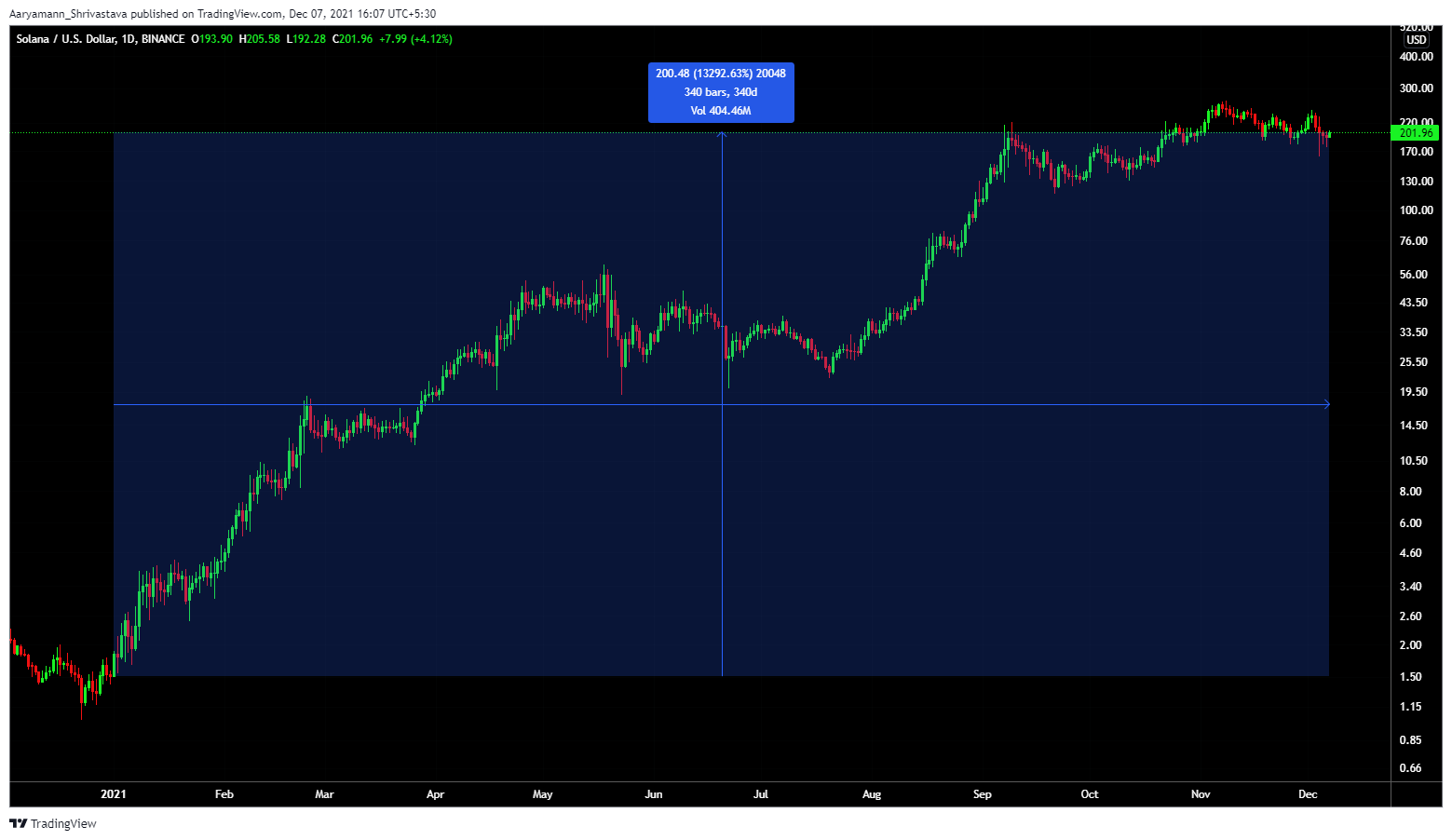 The altcoin’s ROI is at a staggering 10,976%, making it the most profitable asset of the year. 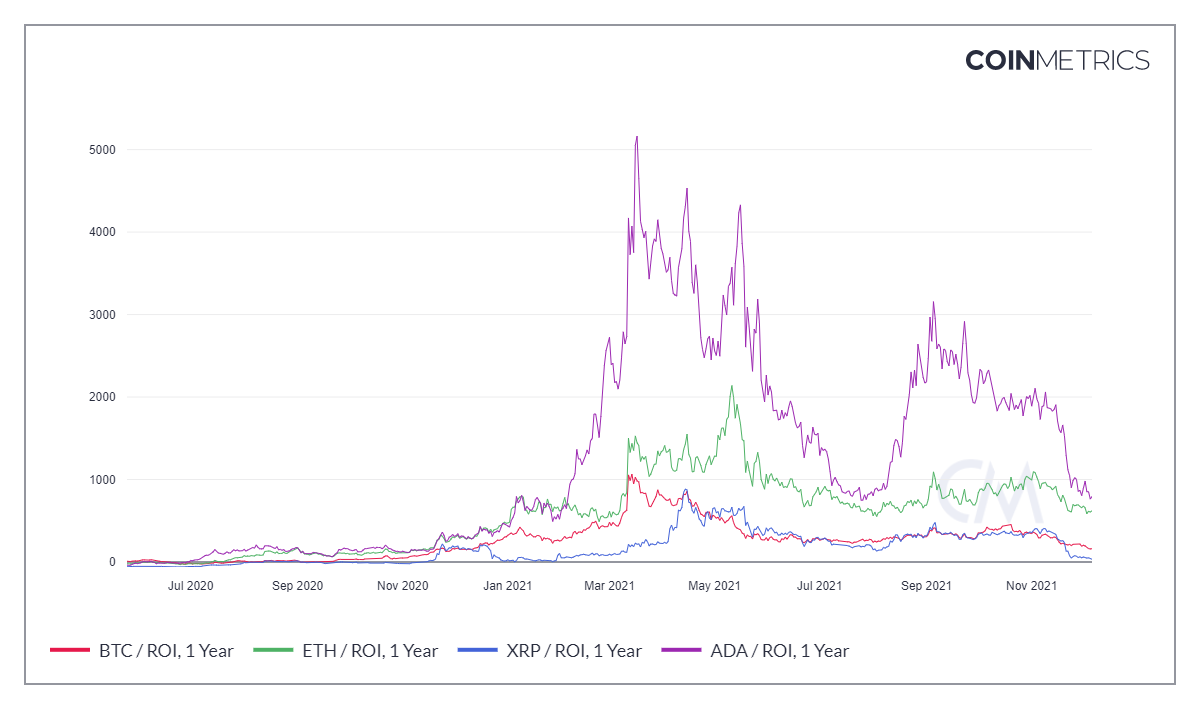 The DeFi boom also played a significant role in the rise of these altcoins.

However, these cryptocurrencies have also been subject to criticism, more so than most due to the volatile nature that pushed many institutions to take drastic measures against them. The ongoing Securities and Exchange Commission v. Ripple Labs lawsuit is a prime example.

Then, there was the issue of crypto-trading and mining ban in China. It affected the entire market badly, with the latter taking weeks to recover. Following the same, there was the FUD around India’s proposed crypto-bill and what its contents would mean for the country’s strong crypto-community.

But, this volatility is a concern of investors as well.

In a recent survey by CoinShares, it came to light that the biggest issue investors have is volatility, more so than regulation and accessibility. 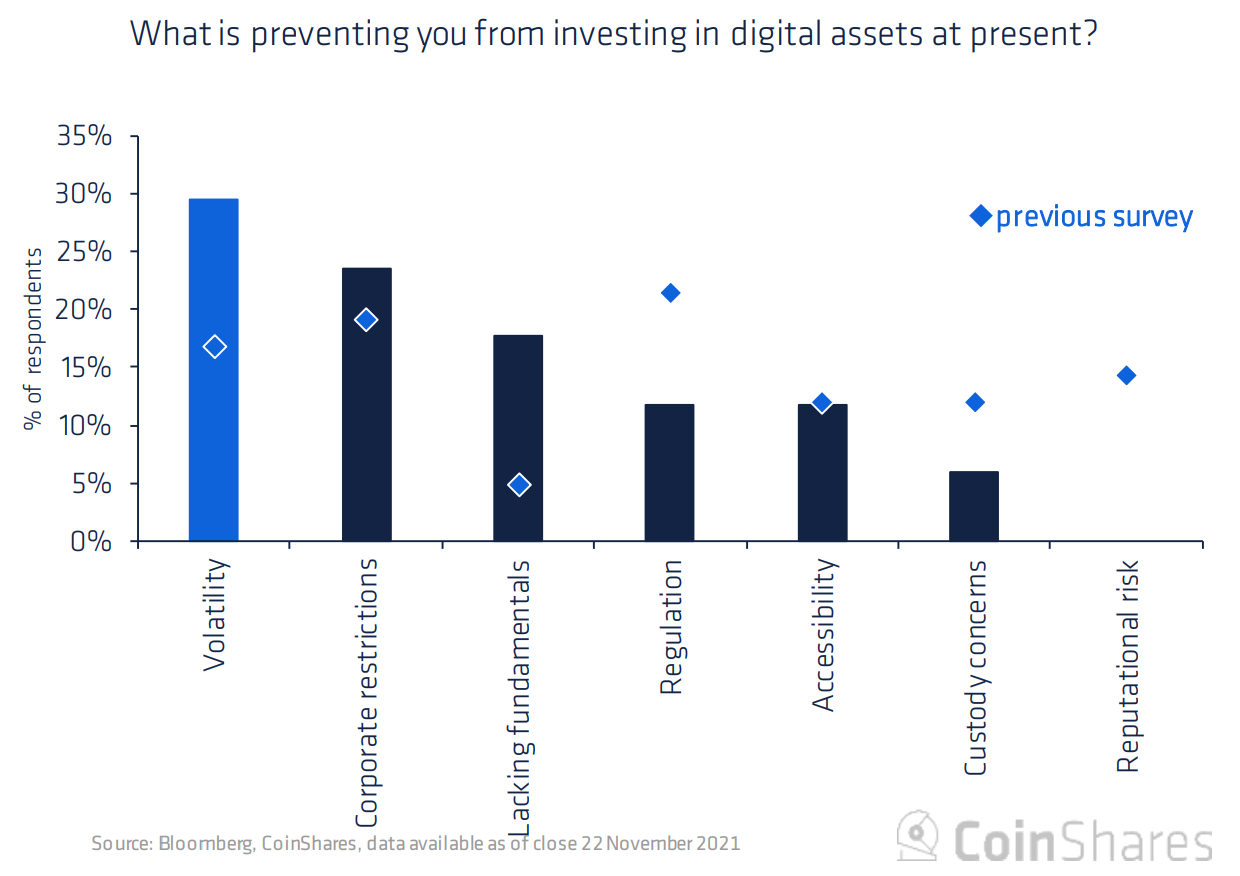 Plus, most investment in cryptocurrencies is still born out of the “get rich quick” mindset, instead of actually adopting the use cases of the technology behind it.

This has led people to look into other forms of crypto-investments. This brings us to…

There are many blockchain companies that delve into mining as a source of income, who also trade on traditional stock exchanges, but remain backed by crypto. Some well-known examples of the same are HIVE Blockchain Technologies Ltd., Galaxy Digital, Bitfarms, etc. who have all been mining cryptocurrencies. Consequently, their tickers have witnessed successful growth over the year.

Their hikes are actually in line with most of the top cryptocurrencies’ growth. HIVE offers an ROI of 1575%, BITF (Bitfarms) promises returns worth 1,166% and Galaxy Digital’s GLXY gives a 369% return on your investment.

In addition to the already established companies, there have also been instances of crypto-based companies using the SPAC method to plan and raise investments and become public companies.

However, people still want to feel the heat of crypto, but with the safety of the traditional investment route. This led to the demand of…

Also known as ETPs, these include ETFs, ETNs, etc. that have drawn investors’ attention over the years. This year, the demand for ETFs has been absolutely crazy and investors actually got what they wanted with the ProShares Bitcoin ETF (BITO) that launched on 19 October in the middle of the SEC v. Ripple lawsuit.

Now, the reason why these ETFs are so popular is that a) They are SEC-approved and thus can’t be subject to legal objections, b) The ease of buying an ETF compared to an actual cryptocurrency, and c) Because of their tax return policies. In fact, ETFs only create a taxable event when they are sold.

If the ease of buying and tax benefits come into the discussion, then GBTC is equally important thanks to its 401k advantage. However, GBTC does not qualify as an ETF. Since it is trust-based, it is qualified as a company as per regulations. This results in GBTC having limited shares. And yet, with $37 billion worth of AUM, it is definitely the biggest crypto-backed investment vehicle in the market. 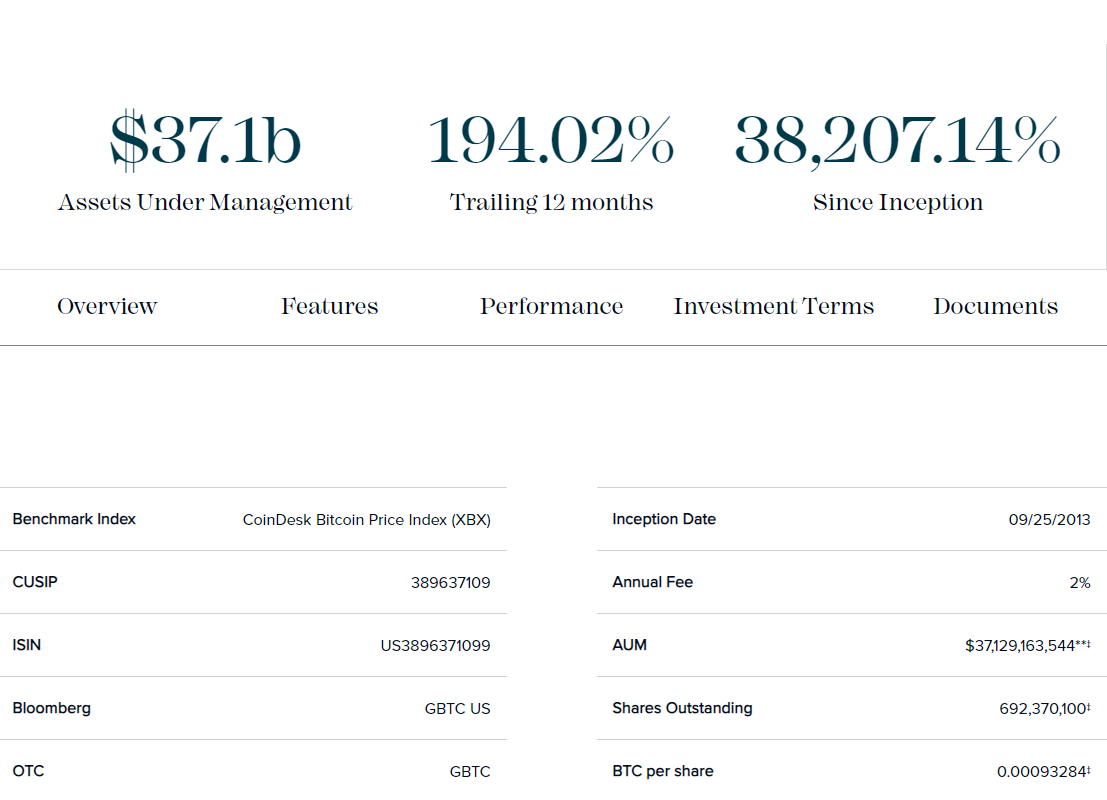 However, even ETFs’ hype has come down with the entire crypto-market witnessing an underperforming November. In the first week of BITO’s launch, ETFs brought in inflows worth almost $1.46 billion. The figures for the same fell by 79% to $305 million this week. 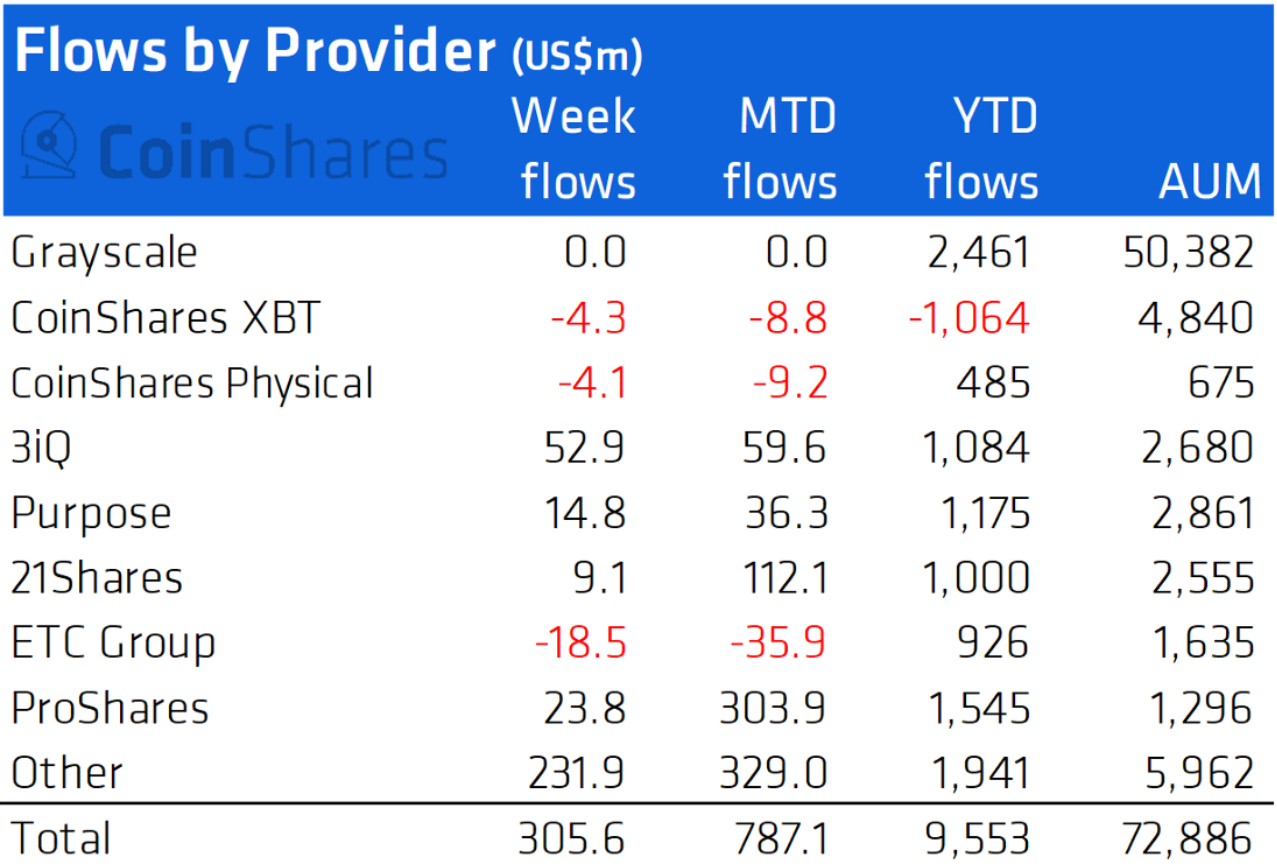 But these are not it…

Traditional investment vehicles have been observing and banking on the crypto-hype to propel themselves up. Tesla, Square Inc., and the most famous MicroStrategy have been accumulating Bitcoin and other altcoins to draw investors towards their stock tickers.

And surprisingly, it has paid off. All of these companies saw staggering growth this year. In fact, presently, MicroStrategy is the biggest corporate holder of Bitcoin in the world, acquiring 121,044 BTC in almost a year.

In any case, the biggest issue to crypto-investments lies not in what’s before you, but in what is not.

The true purpose of cryptocurrencies…

… was decentralization. Bitcoin was created with the notion of making currency decentralized and the improvements over the last 13 years have been done in order to make it a reality. And these crypto-based companies, ETPs, and traditional investment vehicles banking on the crypto-hype are proof that we are still far from achieving it.

The top DEX in the market, PancakeSwap, currently handles $4.3 billion worth of trades every day. On the other hand, the top CEX – Binance – operates trade volumes of almost $29 billion in 24 hours.

The consistent need for centralized investment options represented by the paramount demand for ETPs and CEXs is a testament to the long-standing psychology of faith in centralized systems only because they have a face.

So, what is the right way?

Well, in my opinion, there is no “right way.” Every investment option comes with its own bag of boons and banes. The traditional and relatively “secure” options are subject to limited growth, whereas crypto-assets might see skyrocketing hikes worth more than 100% in a single day.

But then, they also go through sudden liquidations, drops in demand, and excessive volatility which can harm your own investments.

Besides, even if faith in decentralized systems does increase, centralized options will never be obsolete. Because people will always want a visible system to put their money into. This is why even investment through banks are some people’s preference.

And safe players who want to dip their toes into cryptos without being subject to excessive risks can go with safer crypto-investments such as ETFs, GBTCs, crypto-enthused companies, etc.

The dip that shook the market and what lies ahead, as Bitcoin crosses $50,000

After a bumpy ride, are Bitcoin miners recovering from November pangs