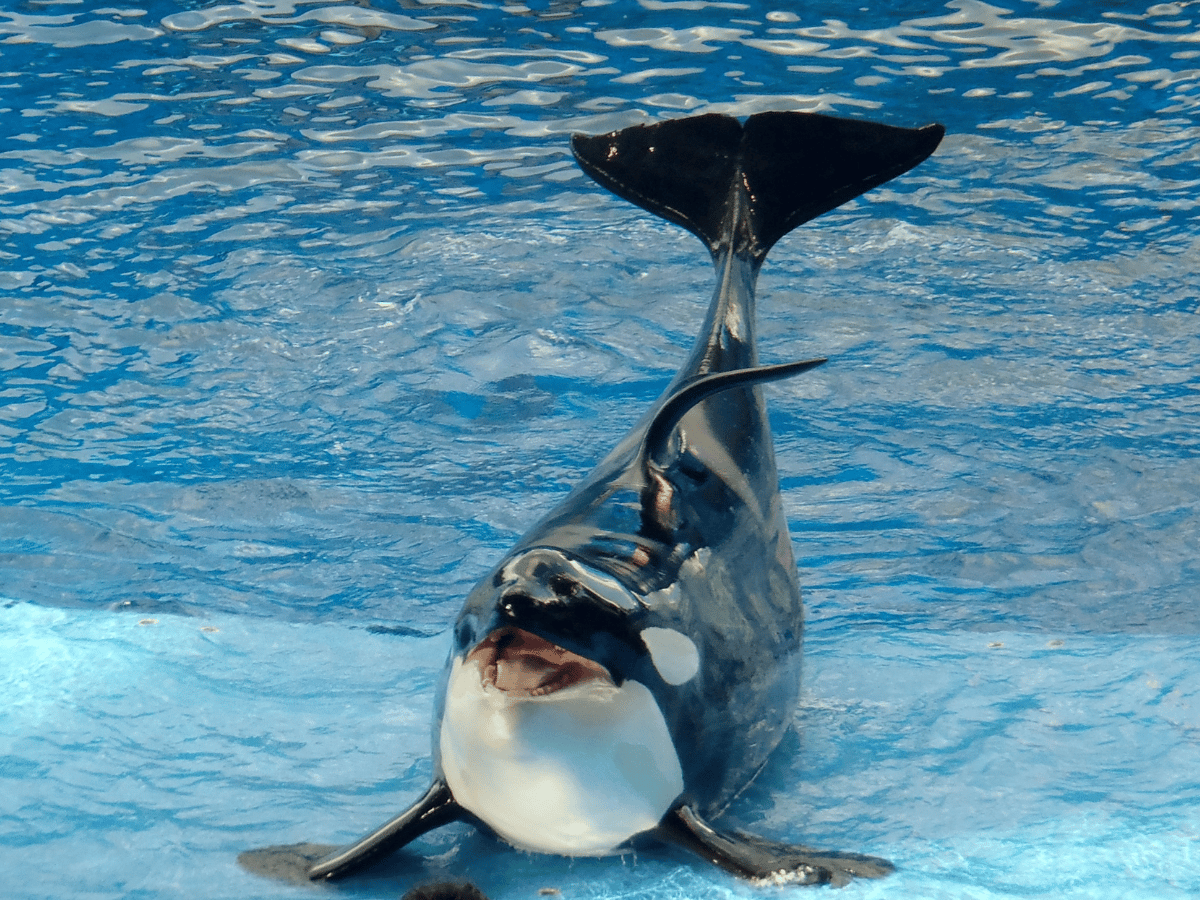 Bitcoin [BTC] whales’ holding and spending behavior were locked on opposite sides, data from CryptoQuant revealed. According to the comprehensive crypto trading data provider, whales were actively occupied with selling.

Interestingly, the action dated back to June 2022 and led to the dumping of 367,000 BTC. The structure of this position often has a typical effect on potential asset decrease or increase. Considering this status, BTC might find it challenging to bolster despite its rise above $17,000.

Whales spending BTC as others prepare

While there had been instances where whales sold and accumulated robustly, this current scenario was different. CryptoQuant’s familiarity with the situation showed that they were not accruing BTC, resulting in a spending spree.

This case is usually characterized by a price decline upon continuation. Thus, BTC faced the possibility of a further drawdown. The signs were glaring, as per the Bitcoin Spent Output Value Bands. 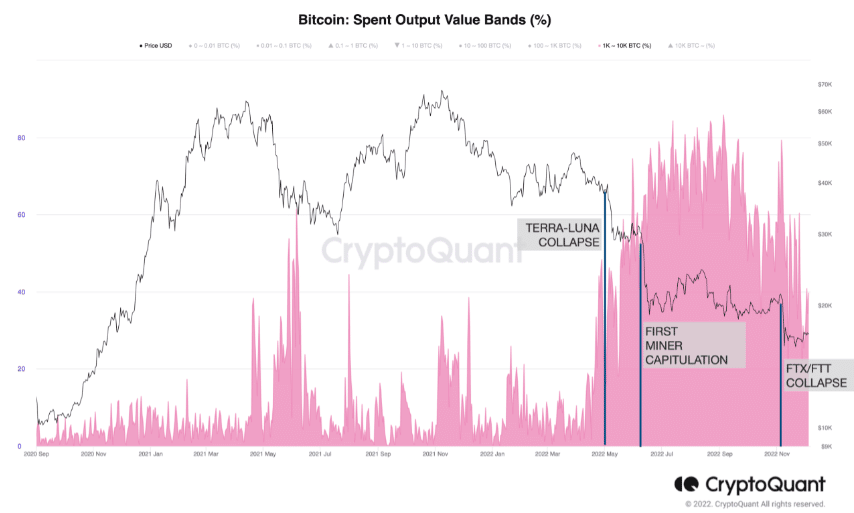 With such a high, it meant that whales formed a large part of those who moved their coins. However, the periods when intense sell-offs happened did not come as a surprise, as shown by the above chart.

While the market might have gone past the FTX collapse and LUNA crash, miner capitulation still existed. As it often goes hand in hand with whale action, a rally might not be expected in the short term.

Further, Santiment reported that Bitcoin had reached a four-year low per its exchange supply. At press time, the supply on exchanges was 6.418.

This extremely low value indicated that there might be a reduction in the short-term sell pressure. Additionally, data from the on-chain platforms revealed that the supply of Tether [USDT] increased to 36.773. If this trend continued, it meant that investors were preparing to buy, and BTC might not fall below its current lows.

However, the Supply-Adjusted Coin Years Destroyed (CYD) had interesting indications per the long-term BTC view. According to Glassnode, the metric had minimally risen to 173.88 at press time. In this phase, it meant that Bitcoin accumulation could be on the increase and head toward peak values.

As mentioned before, because the whales were dumping, the action could be that of retail investors. In comparison with the USDT supply, the possibility could be valid. 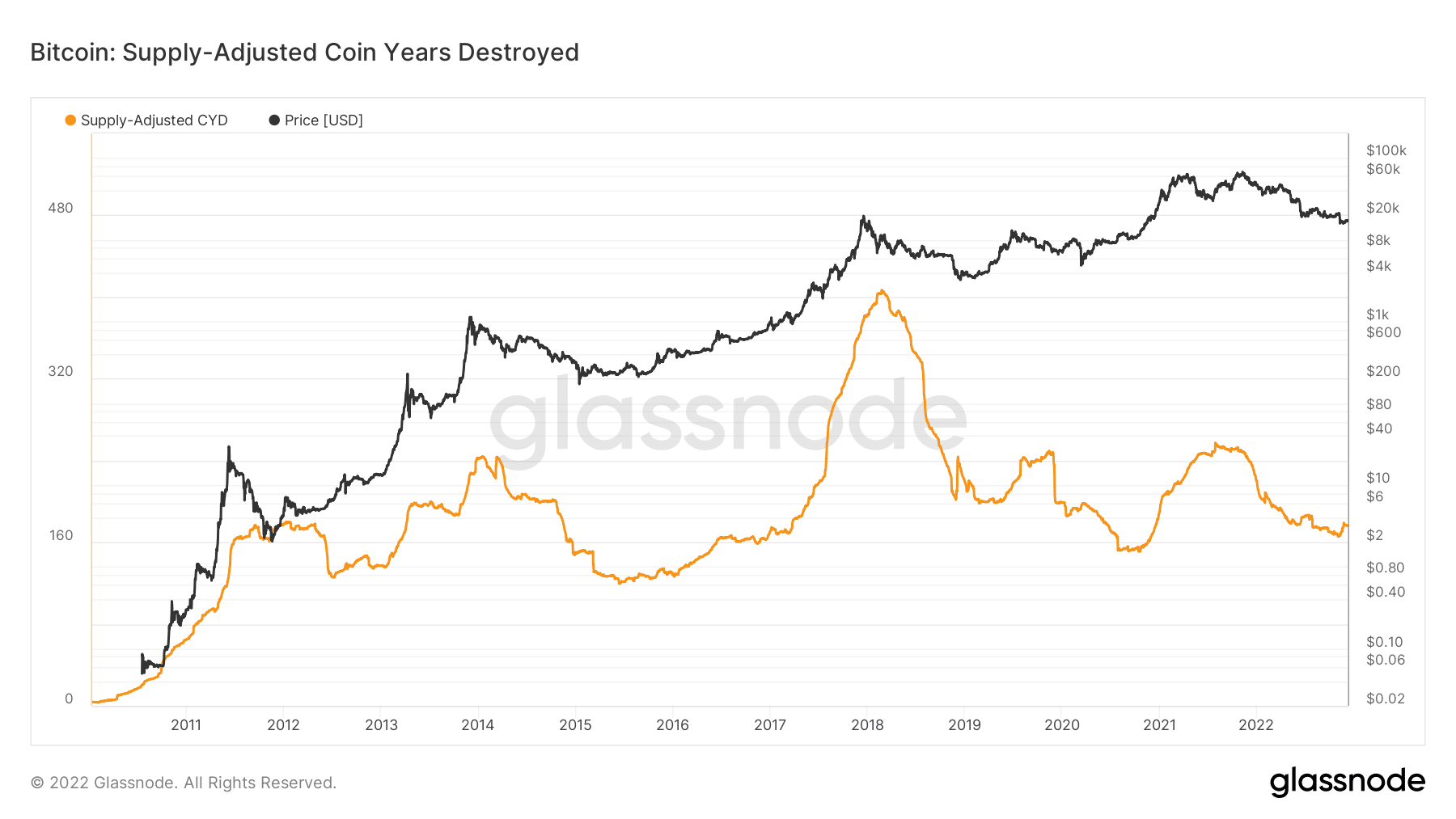 Won’t be here for too long

Despite BTC registering a 2.36% increase in the last 24 hours, indications from the chart showed that it was not past its decline. Going forward, the king coin might struggle in its attempt to remain above $17,000, as shown by the Exponential Moving Average (EMA).

At the time of writing, the 50 EMA (yellow) edged closer to the 20 EMA (blue). This position meant that BTC’s recent increase had no support confirmation, and a rejection could be imminent. However, the 200 EMA (purple) rising above both the 20 and 50 showed that the possible drop might not remain for too long. 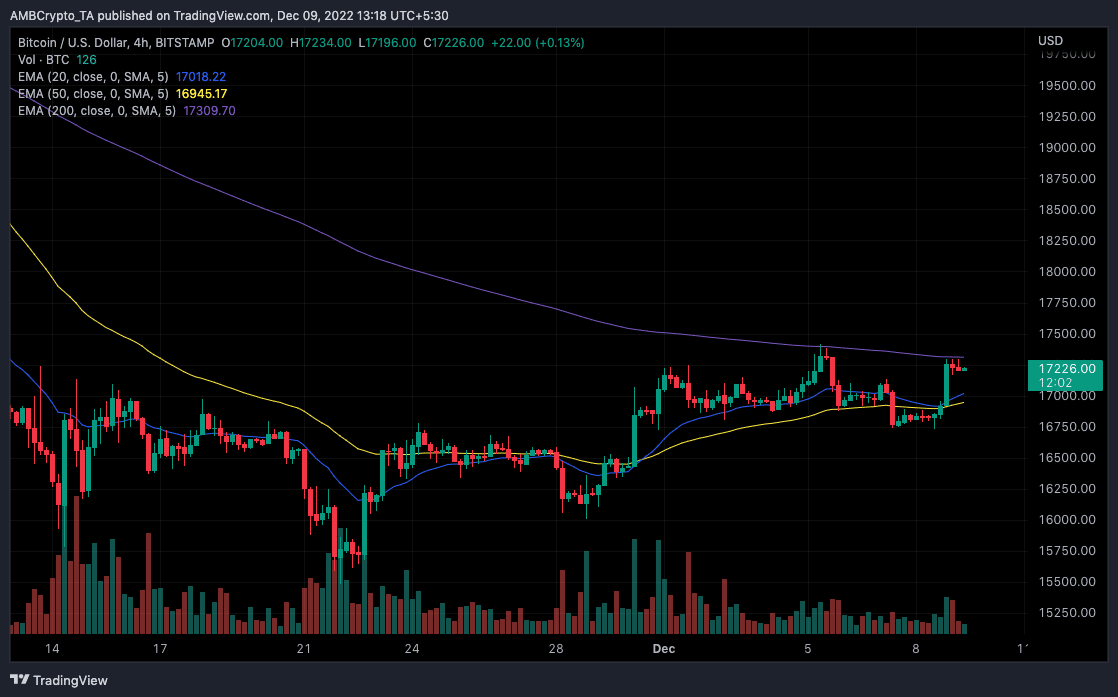