Bitcoin’s Lightning Network has been quite the head-turner and is often referred to as a game-changer for the blockchain. The Lightning Network aims to enable fast, digitally native payment infrastructure for BTC without sacrificing its core principles of security, privacy, and availability.

At the time of writing, BTC’s Lightning Network had hit an all-time-high capacity of 2,738 BTC, equivalent to $116.3 million. Needless to say, there seemed to be high anticipation among enthusiasts about its future.

The Lightning Network’s capacity has increased by 161% since the beginning of this year. In fact, it has grown since its inception in 2018, which can be observed through a growing node count, network capacity, and other metrics.

Since 17 September, there has been a gradual increase in LN’s network capacity. This happened alongside a rise in the number of nodes. Additionally, the number of LN channels saw a rise too. 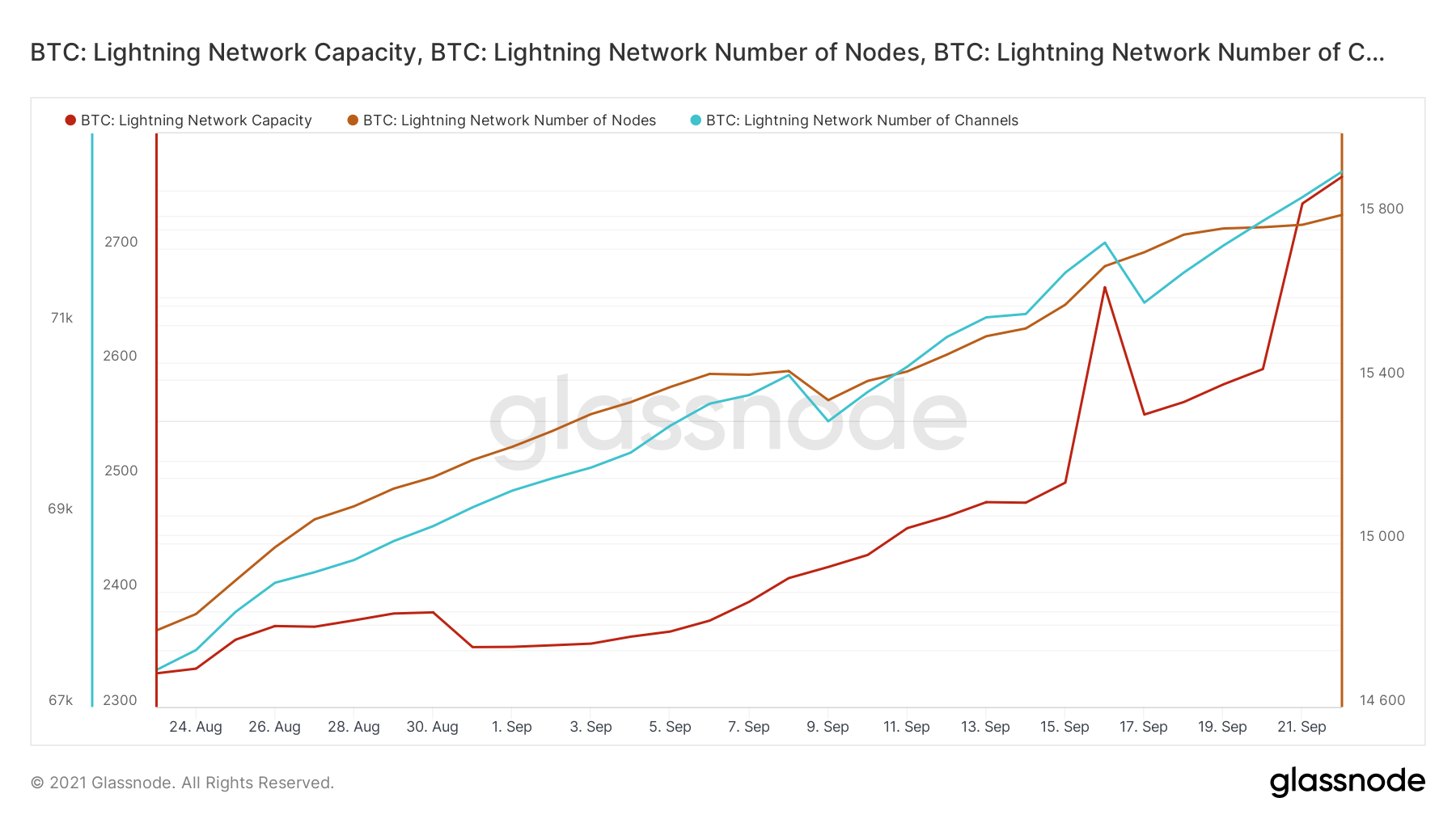 The lightning channel is utilized in micro-transactions and can be used for a variety of purposes in addition to making purchases. In fact, developers have been working continuously to see how similar behaviors may be replicated in different industries.

Earlier this month, peer-to-peer cryptocurrency exchange Paxful integrated Lightning Network onto its platform, giving its over 7 million users access to near-instant BTC transfers. If Lightning is able to maintain a decent rate of growth, the L2 scaling solution could have a capacity of 10,000 BTC by March 2022, according to a previous article.

Now, while metrics and adoption paint a bullish picture for LN’s future, there is still a lot of development lacking. The same, in fact, was recently pointed out by a Reddit user.

Last week, a Redditor alleged he had discovered a way to attack Lightning Network’s custodial services. He claimed that although LN transaction fees are negligible, they are not zero. While Lightning allows for almost free transactions, it also allows for extremely fast transfers. These negligible amounts add up to worrisome amounts very quickly.

Before understanding how attacks on LN will work, it is important to understand that Lightning uses Hash Time Locked Contracts (HTLCs) to route payments that contain two fundamental pieces – A hash lock and a time lock.

This means that there is a secret hash that can be revealed for payments to be successfully routed which is called the ‘preimage.’ Now, since there is also a concept of a time-out wherein payments can be claimed by either party after a certain amount of time passes, it can be taken advantage of by bad actors with a sophisticated understanding of Bitcoin and LN.

The Reddit account dubbed ‘Reckless Satoshi’ highlighted how a “discrepancy between real routing fees and service’s transaction fee can be exploited for a profit.” He further noted that if a service is built where withdrawals are not rate limited nor the fee is translated to the user, there might be problems.

In fact, the Redditor used the LN attack on six different services including Bitfinex, Muun, Okex, Lnmarkets, Southxchange, and Walletofsatoshi. After depositing funds into the custodial services, he used “a node that will be routing the payments between the custodial service and the receiving node.”

If there is a kernel of truth to the aforementioned, what does it mean? Well, risks pertaining to network congestion causing malicious attacks and loopholes in the network’s development still defy the network’s core principles of security.

So, while BTC can become a medium of exchange in the future, it won’t happen until these issues of security are resolved.

Related Topics:Bitcoin LightningLightning Network
Up Next