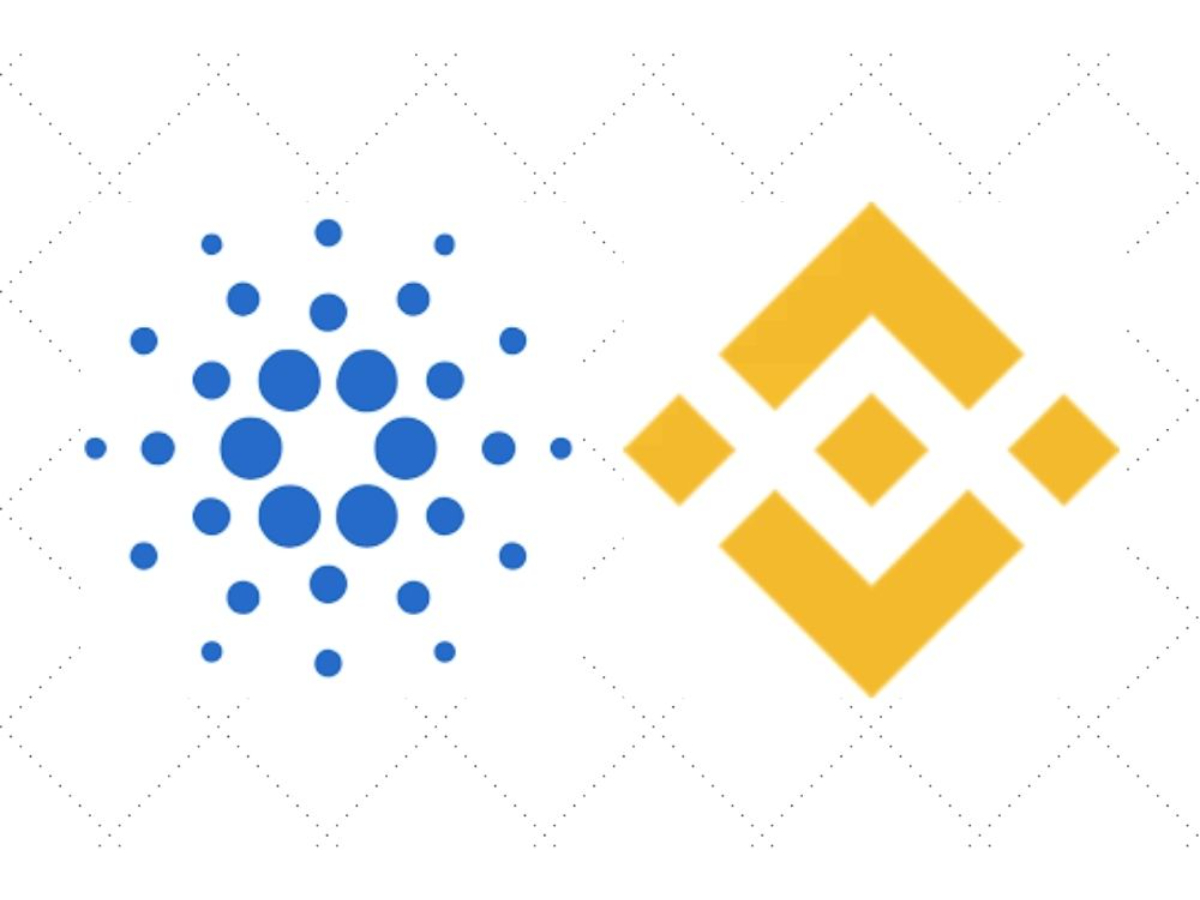 As is the case with every currency, asset, security, stock, metal, bank, and whatnot, the market is always in constant competition. Competition from powerful dominators, competition from emerging underdogs. There is no room for slowing down. And with cryptocurrencies, it’s much worse.

Since, unlike traditional markets, crypto markets trade 24/7, assets and investors alike are in an ongoing war – For more profits, for more inflows. So, it’s only natural for this competition to affect not only small upcoming assets but also those who have been in the space for a long time.

This research/analysis is of two such coins that have been in the crypto-scenario for ages now. And, they aren’t fighting each other for a space in the top-50 or top-20 or top-10. This is the fight for the spot of #3. And, the name of the fight is…

Until a week or two ago, the competition for becoming the third-biggest asset was at its peak. In fact, for a little while, Cardano even outperformed Binance and claimed the third spot. Regardless, both the altcoins have been skyrocketing throughout the year and consequently, their price and market capitalization have been growing at the same rate as well.

Since a lot of factors came into play this year, we cannot compare the assets’ growth with the previous years’. However, year to date (YTD), the assets have performed beyond expectations.

Cardano, at the beginning of January 2021, was worth a little more than 17 cents. When the project launched 3 years ago, it had a lot to prove. And, the community has had a lot of expectations as well. So, as the Cardano Foundation roadmap’s different stages reached closer to becoming a reality, the asset got more attention from investors. 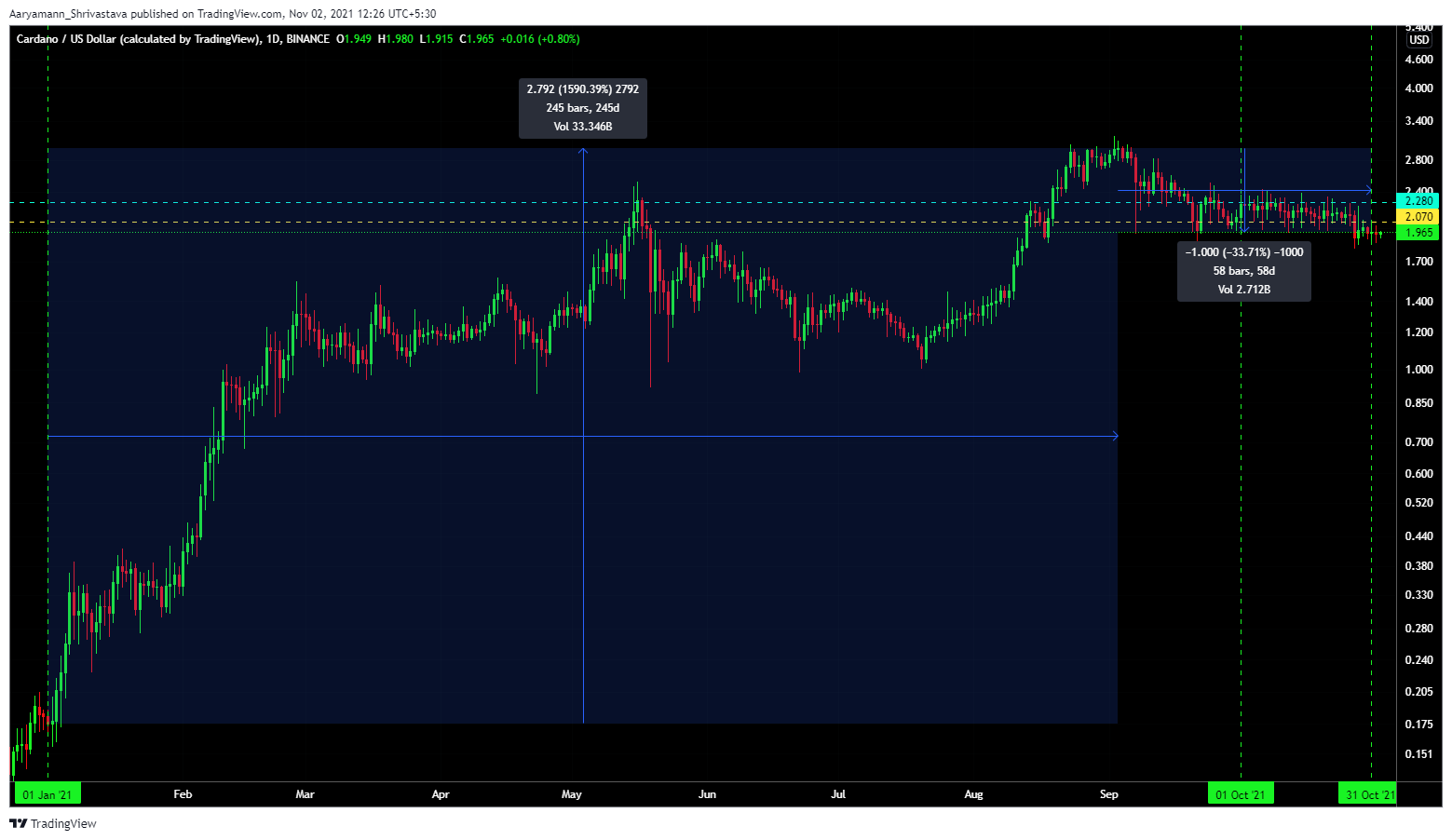 This growth led to ADA hiking by 1590% YTD. Since then, however, ADA has slipped by 33.71%. In fact, it has been in consolidation, something that has been going on for more than a month now.

27 October was the worst day in weeks as ADA dropped by 10.52%, with the ensuing recovery not great either. Thanks to the same, it fell through to the $2.07-support. For the entirety of October, Cardano was stuck within the $2.280 resistance and $2.07-support. However, that support has now been flipped into the new resistance.

On the other hand, we have Binance Coin. Even though it only hit one ATH this year, its growth in those 5 months shamed Cardano’s 2 ATHs and 10-month growth. Up by 1677.8% YTD in May, the altcoin had been trading well above $600.

The crash of May, however, did negate almost 300% of that growth and affected the asset dramatically.

Alas, while the month of October was a curse for ADA, it turned out to be a blessing for BNB. Up by 42.32%, the coin seemed to be showing promising signs of a continued hike. 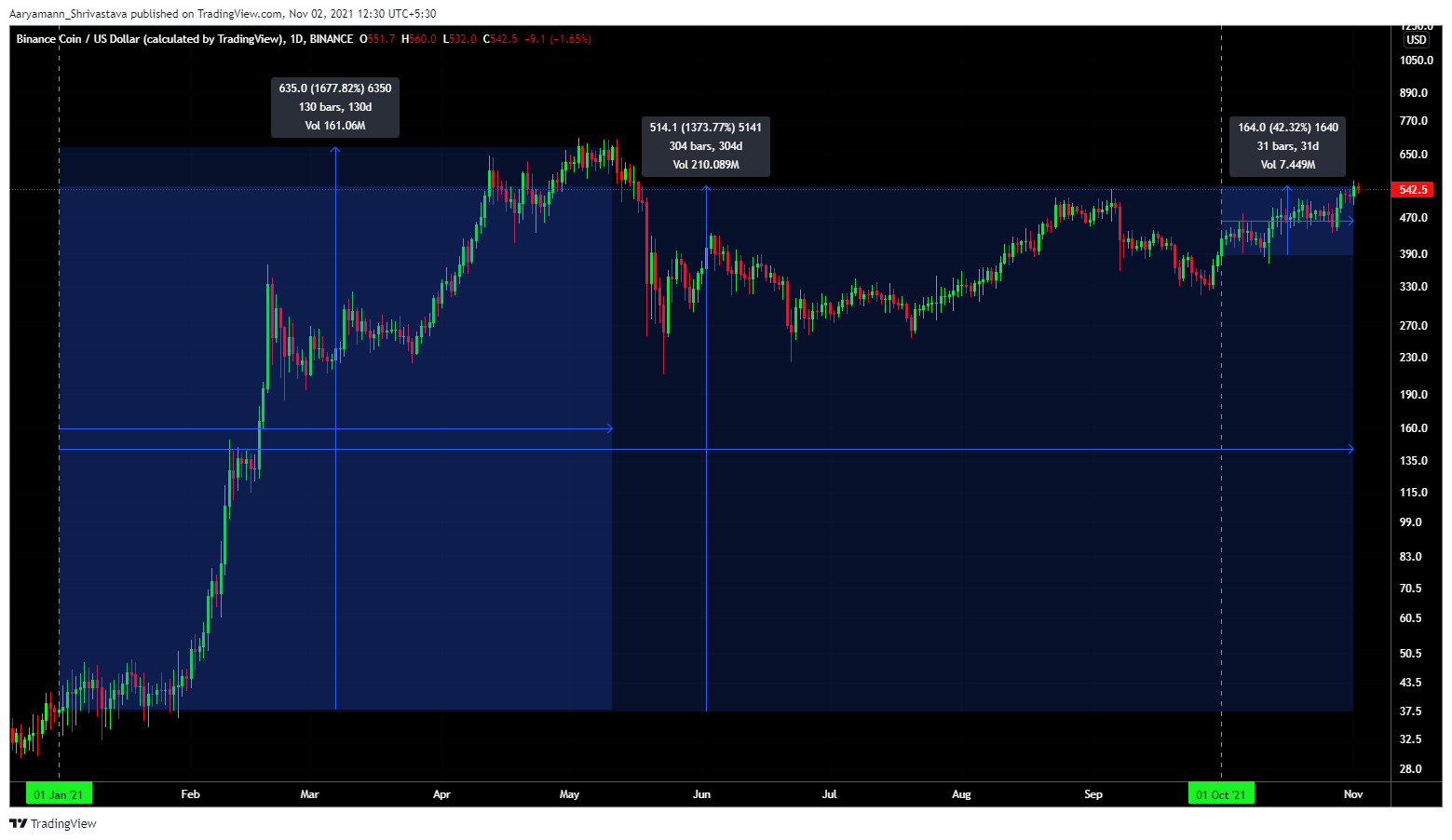 What brought the hype for Cardano?

Cardano’s journey has been nothing short of a movie. Charles Hoskinson is a well-known face in the crypto-space and Cardano’s laid out, detailed plan, with a coding language built from scratch and the promises of a decentralized future, got people’s hopes higher than imaginable.

The DeFi boom is yet to come, but the bullishness surrounding Goguen’s release and the arrival of smart contracts carried the coin until September.

The project showed and continues to show promise in its effort to become an actual decentralized network, with its plans of scaling and decentralizing the blockchain with the Basho and Voltaire updates in the future.

Additionally, the hype around NFTs was thought to have carried over to Cardano post the smart contracts’ launch.

However, surprisingly, since the arrival of smart contracts on 12 September 2021, Cardano has lost steam.

Average trading volumes, transaction numbers, everything declined quickly and this knocked the altcoin behind in the race for the third spot. In fact, the push was so hard, Cardano fell behind Tether in terms of market cap and now sits at the fifth spot. 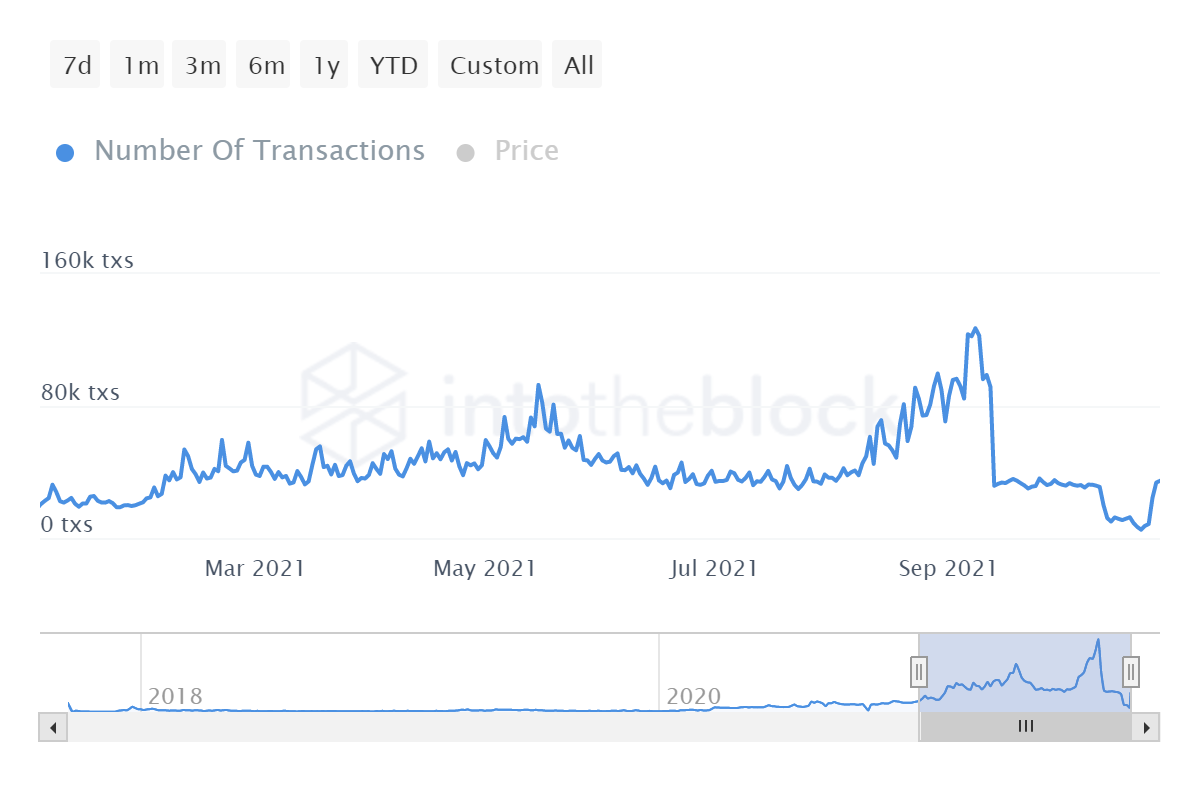 How did Binance keep up?

While Cardano is the first blockchain to be developed using peer-reviewed research and evidence-based methodologies, focusing on the decentralization of the future of finance, Binance Coin is an exchange token.

As the biggest cryptocurrency exchange, the foundation already has volumes in billions of dollars flowing into the company. So naturally, its token is bound to perform well. But, this is where the differentiation ends. Because Binance also has Binance Smart Chain (BSC). 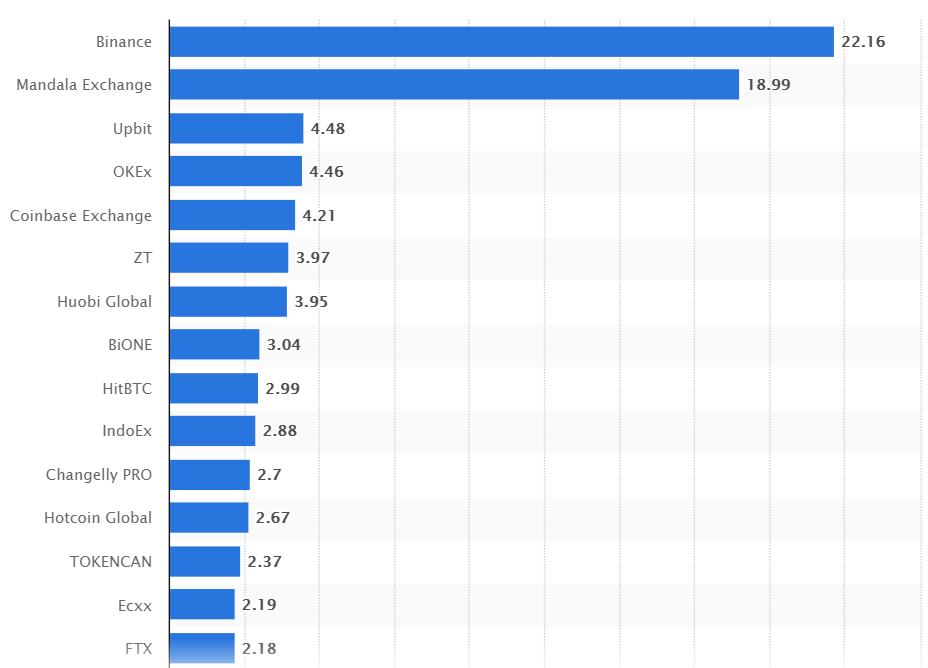 BSC was built with a focus on Decentralized Finance. Since its launch in August 2020, the smart chain grew so quickly that today it is the second-biggest DeFi network in the world after the king of DeFi Ethereum. With over 130 protocols and almost $20 billion in total value locked, the network already has an upper hand in the DeFi space.

So, who has a better future?

While the question may sound simple, it is actually quite complex. Declaring either one to have a better future than the other would require data of similar aspects of the network, which is DeFi for Binance and Cardano, that would show how they have performed to date.

Unfortunately, Cardano does not have enough historical data to make that comparison. Solely based on the network, they both appear to be in a good spot.

Binance recently announced that its U.S arm is looking to launch its IPO by 2024. If everything falls into place, Binance could see a future where it would shine not only as the biggest cryptocurrency exchange but also as a successful public company.

The inflows from this would improve the company’s scalability immensely and consequently, Binance, BSC, and BNB would all benefit from it.

On the other hand, Cardano is one of the only few projects that have legitimate capabilities to bring DeFi to everyone. Cardano has a proper development team made up of highly experienced developers led by Charles Hoskinson himself.

However, it is yet to prove all of this.

Plus, Cardano’s recent deployment of Anti Money Laundering (AML) analytics is another step in the right direction. Though Cardano was ridiculed for basically giving up their decentralization by deploying AML, Hoskinson countered it by saying,

“…these (Confirm’s AML) partnerships are important. They provide clarity, they provide a lot of business technical requirements and they allow us to make the software better for everyone, everywhere and Cardano will get more adoption in all industries regulated or unregulated.”

On the other hand, Binance also underwent an investigation by the Internal Revenue Service (IRS) and the United States Department of Justice (DOJ). Officials who probe money laundering and tax offenses had sought information from individuals with insight into Binance’s business.

At the time, Binance Founder Changpeng Zhao aka CZ was quick to clarify facts, tweeting in response to Bloomberg’s article,

The "news" title is bad. Article itself isn't so bad actually (but who reads). It described how @binance collaborated with law enforcement agencies to fight bad players, but somehow made it look like a bad thing… 🤔 Anyways. Back to work.

Based on facts alone, while Cardano might look like a show pony right now, it has the potential to become a real stud one day. And as for Binance, all it has to do is keep up with the market to ensure it doesn’t slip back down.

With the difference in their market caps, at the time of this report, found to be $13 billion in favor of BNB, the race might have stretched itself. However, it is not over yet.

Singapore ready to ‘lead,’ when a crypto economy ‘takes off’

What you need to know about this Cardano milestone