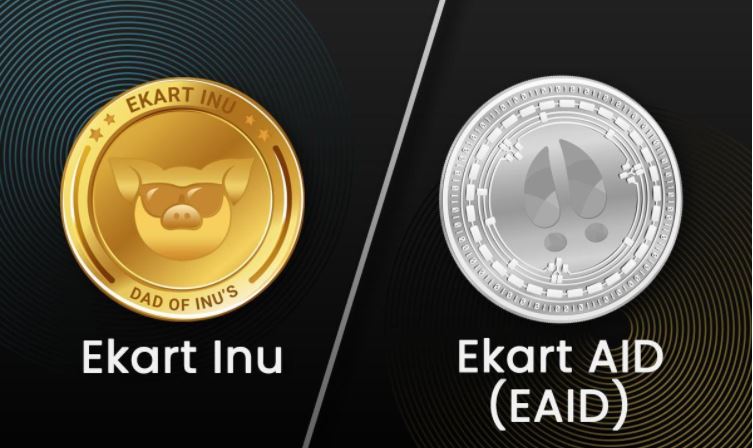 Ekart Inu has launched a spectacular token called EAID(Ekart Support). The Ekart token project has launched EAID as a support token, so this will be a significant support to the Ekart Inu token.

EAID token is blowing up right now. With cryptocurrency traders rushing to invest, many are wondering about the EAID symbol. So, what is the EAID token ticker symbol? Here’s the need-to-know info to avoid buying the wrong form of Ekart Inu crypto.

They aim to reach the 1 billion target on the EAID token. In this, the user must have the Ekart Inu token to buy this EAID token.

Users can use 0% – 50% of Ekart inu tokens and the rest of the 50% with any token while purchasing. In October, they are planning to list this token in reputed exchanges.

But initially, it is available to buy on their official Ekart Inu website  (www.ekartinu.com). So here, there is a time limit for sale that is from Sep 6th to Oct 5th. After that, they will send the remaining token to burn the wallet in presale.

“Goal of EAID is to give the best and safe place to trade your precious crypto while remaining decentralized. We are very loyal to our holders, and that gives us the means to grow exponentially. As we know that with our unified force and the power of Ekart, we will be successful in advance so that we can go to new heights together. “

So, this will be significant support for the Ekart Inu token. The total token supply of EAID is 10 billion with the launching price of $10. They made an incredible move on this token by sending 99% of the EAID token to the burning wallet (BEP-20 and MATIC).

So the remaining 1%, that is 100 million tokens, are going for the trade. Have a 5% transaction fee including 1% of token distributed to account holders as a reward, 2% for token liquidity, 2% for burning wallet. They aim to reach the 1 billion target on EAID tokens.

Ekart Inu aims to increase consumers’ earning potential. The project’s major goal was to build an EAID token and ecosystem that were inexpensive enough for anyone to acquire millions of them.

They purposefully priced the project’s tickets considerably at 10$. The plan is to make the platform profitable even if it only makes $15.

So far, the developers have been successful in this regard. It’s critical to recognize that Ekart Inu has had a fantastic start. However, because the EAID is new, all investments are now speculative.

What is the EAID Token symbol?

$EAID is the Ekart AID token symbol. This EAID ticker symbol is a common identifier, which will feature on any reputable crypto exchanges.

Since $EAID is so new, at the time of writing, it’s only possible to buy Ekart AID via Ekart Inu’s official website.

As such, investors won’t find the EAID symbol on popular exchanges like Binance, OKEX, and Huobi. But the new cryptocurrency token is looking to list first on some reputed exchanges in October, however, so expect to find it there first.

Is the EAID crypto Ekart Inu’s token safe to buy?

EAID is an upcoming, legitimate Ekart Inu token. The new EAID crypto is now available for purchase on the official website.

Once the EkartAID crypto is released on 07th September 2021 officially, users can purchase it via the official Ekart Inu token website. For anyone wondering where to buy EAID tokens online, there’s the answer.

Until that “Buy Token” button activates on the website, don’t purchase Ekart Inu EAID tokens from elsewhere to be safe.

MATIC’s bullish structure might depend on these levels being held