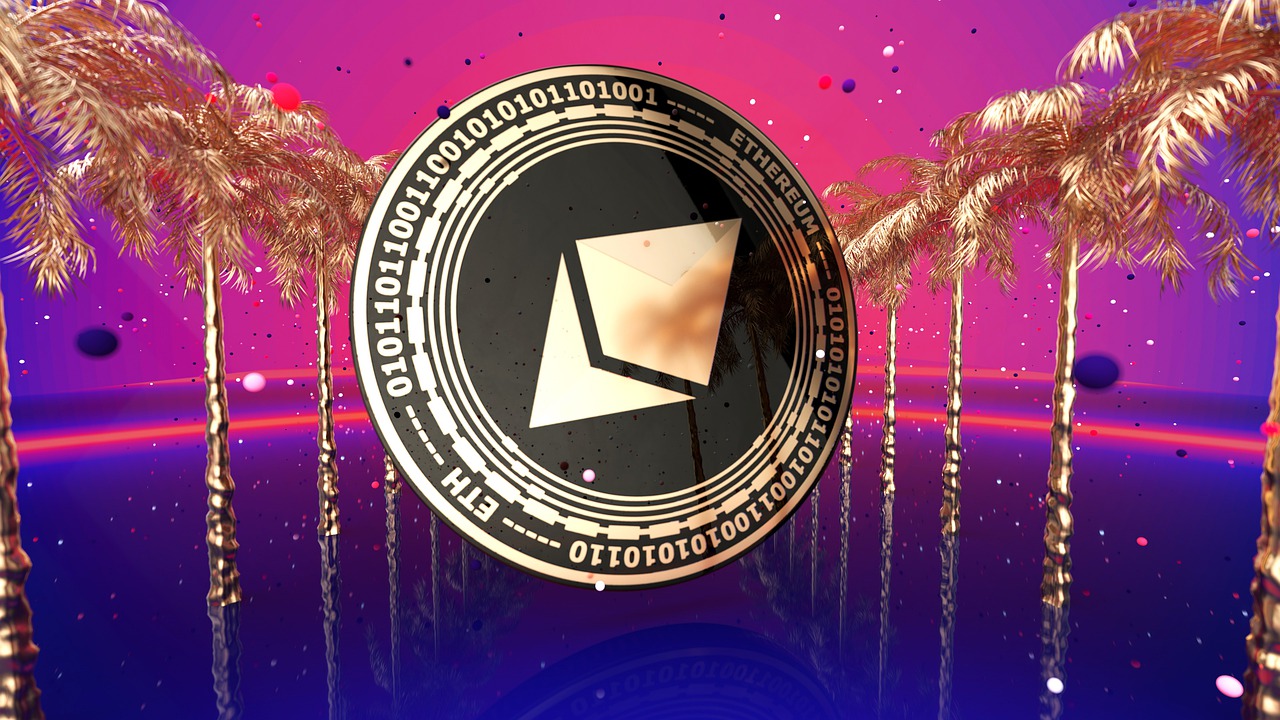 The entire cryptocurrency market is still reeling following the crash triggered by Terra UST‘s depegging fiasco. As explained in one of our earlier articles, even the flagship Bitcoin has been stuck in a narrow range ever since the crash and is showing no signs of any major recovery yet. And, Ethereum seems to be no different.

Technically speaking, there’s little to no chance of recovery in the short term for the top altcoin. In fact, a closer look at the last few weeks shows that it is currently in the process of jumping about in a descending triangle and a convincing breakdown below the bottom trendline can have catastrophic consequences. 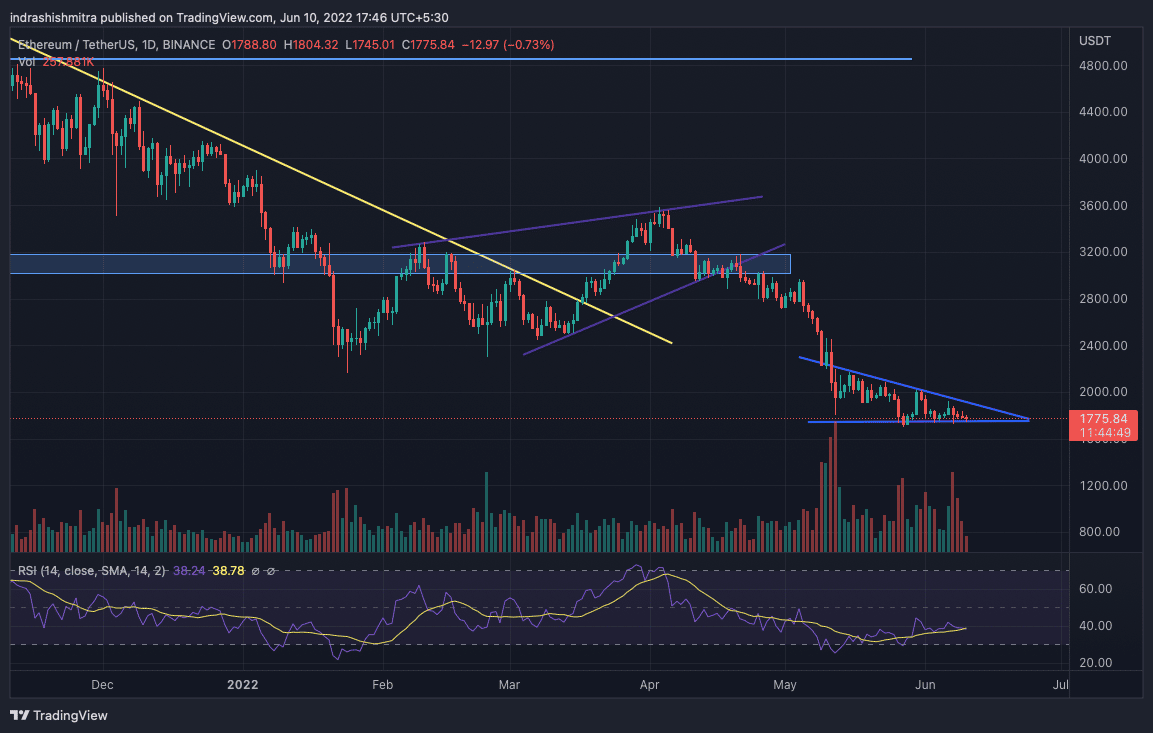 It must also be noted that despite Ethereum blockchain’s Ropsten testnet’s successful ‘merge’ – moving from the PoW execution layer to the Beacon Chain’s PoS consensus chain on 8 June – it has had no effect whatsoever on the price (or optimism) regarding the coin.

Thus, even though there’s nothing wrong – ironically it seems, people are beginning to fear the market and especially its volatility.

Yes, this could be one possible answer from a variety of reasons that could be behind Ethereum’s lackluster performance on the charts. For example, Ethereum Perpetual Futures open interest has been dipping over the past few days, ever since the beginning of June in fact.

It suggests that derivatives traders are cutting down their exposures to the asset fearing, most probably, on-coming volatility and mitigating some of the risks. 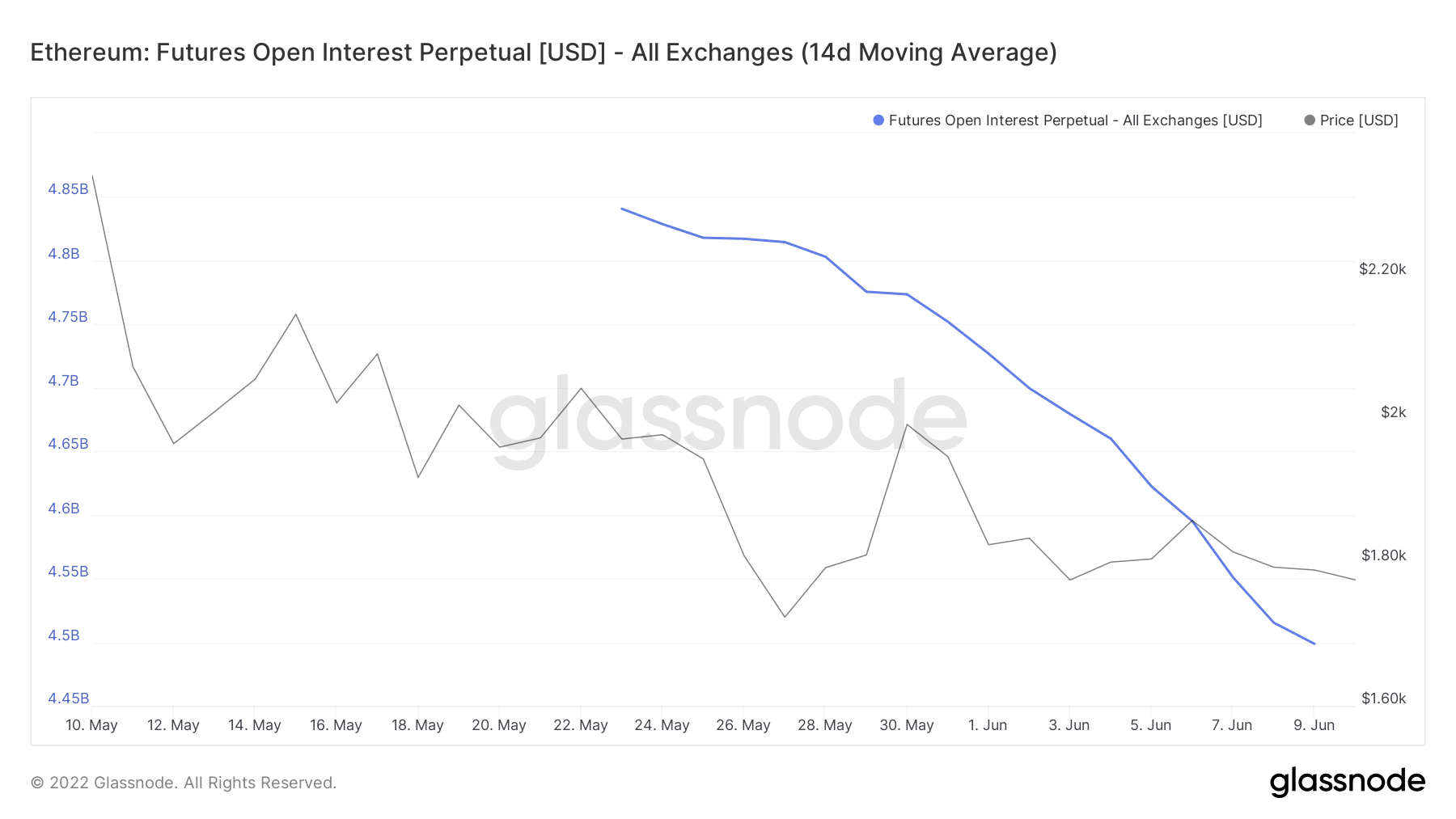 Along with that, Ethereum Perpetual Futures volumes have also been dipping, with a sharp dip between 8 and 9 June – further adding weight to the above view. 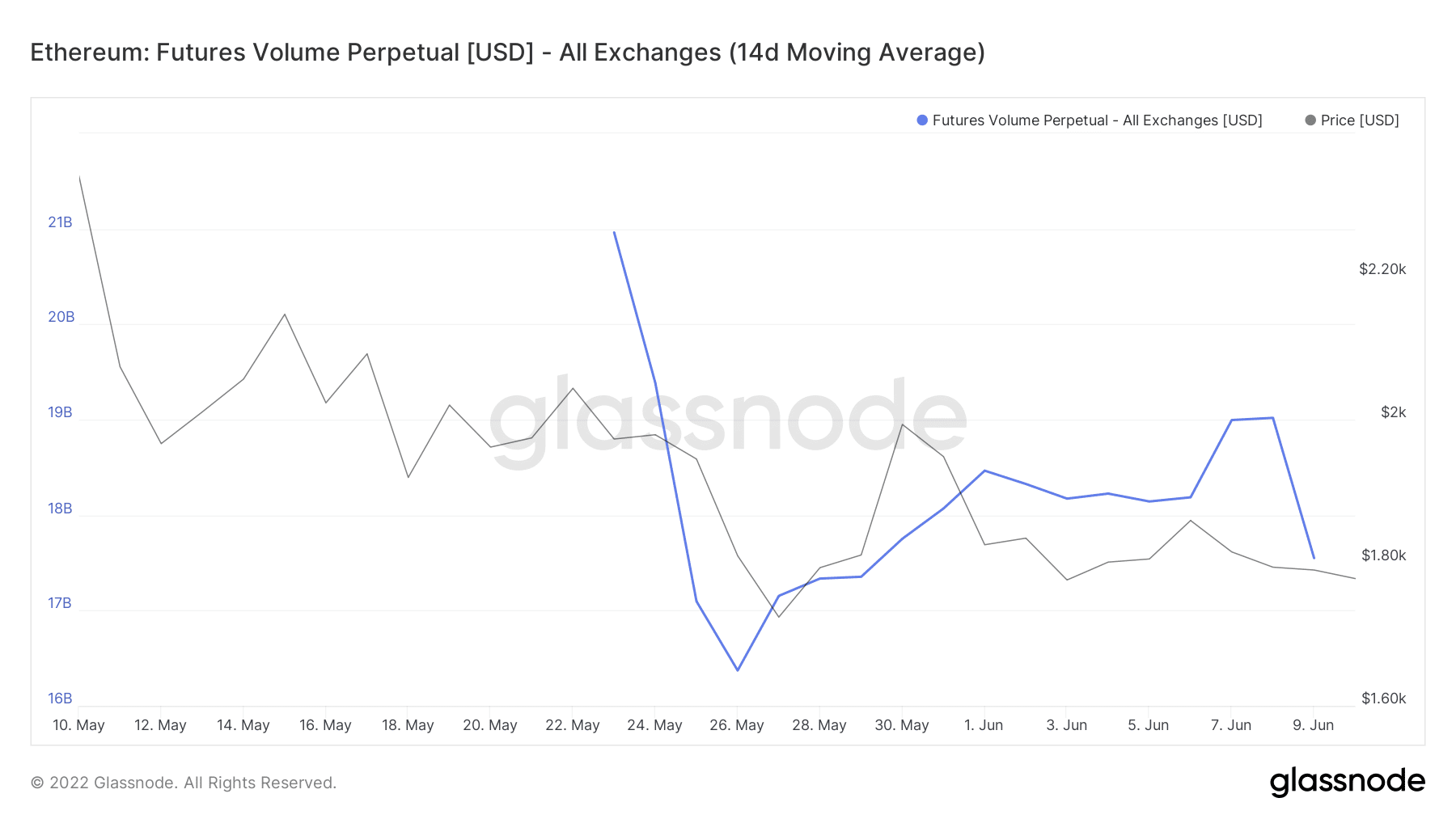 Despite the poor reaction of prices to the first successful merge on the Ropsten testnet, ETH 2.0 staking has been stable. Total deposits to the ETH 2.0 deposit contract have been holding very steady and are rising continuously – which provides much-needed support for the Merge and its eventual consequences. 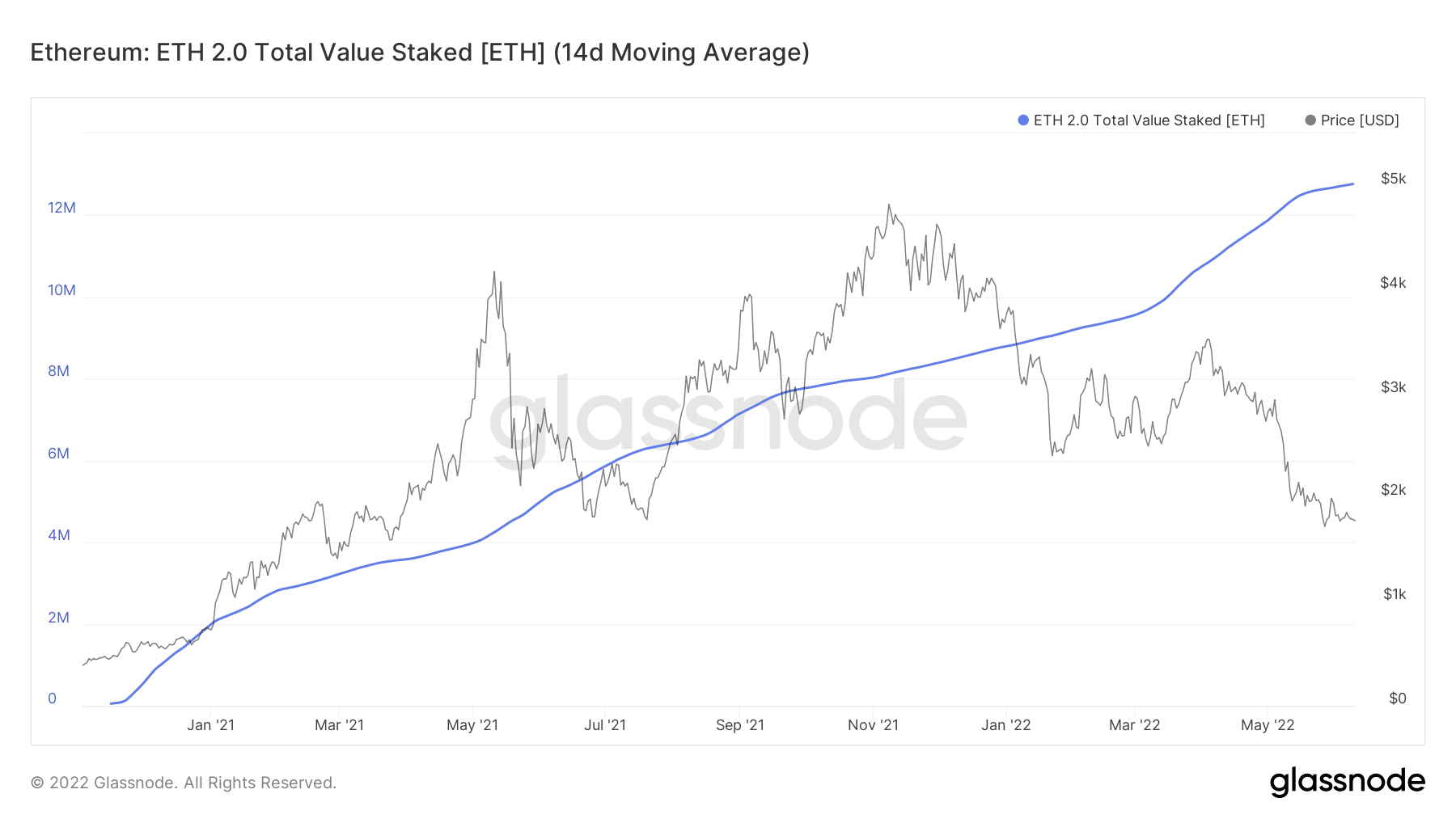 Along with that, despite the massive crash in the past few months, over 53% of the supply is still in profit. Therefore, a further fall triggered by a panic sell seems to be quite low. Unless of course, there is a major profit booking on major whale accounts. 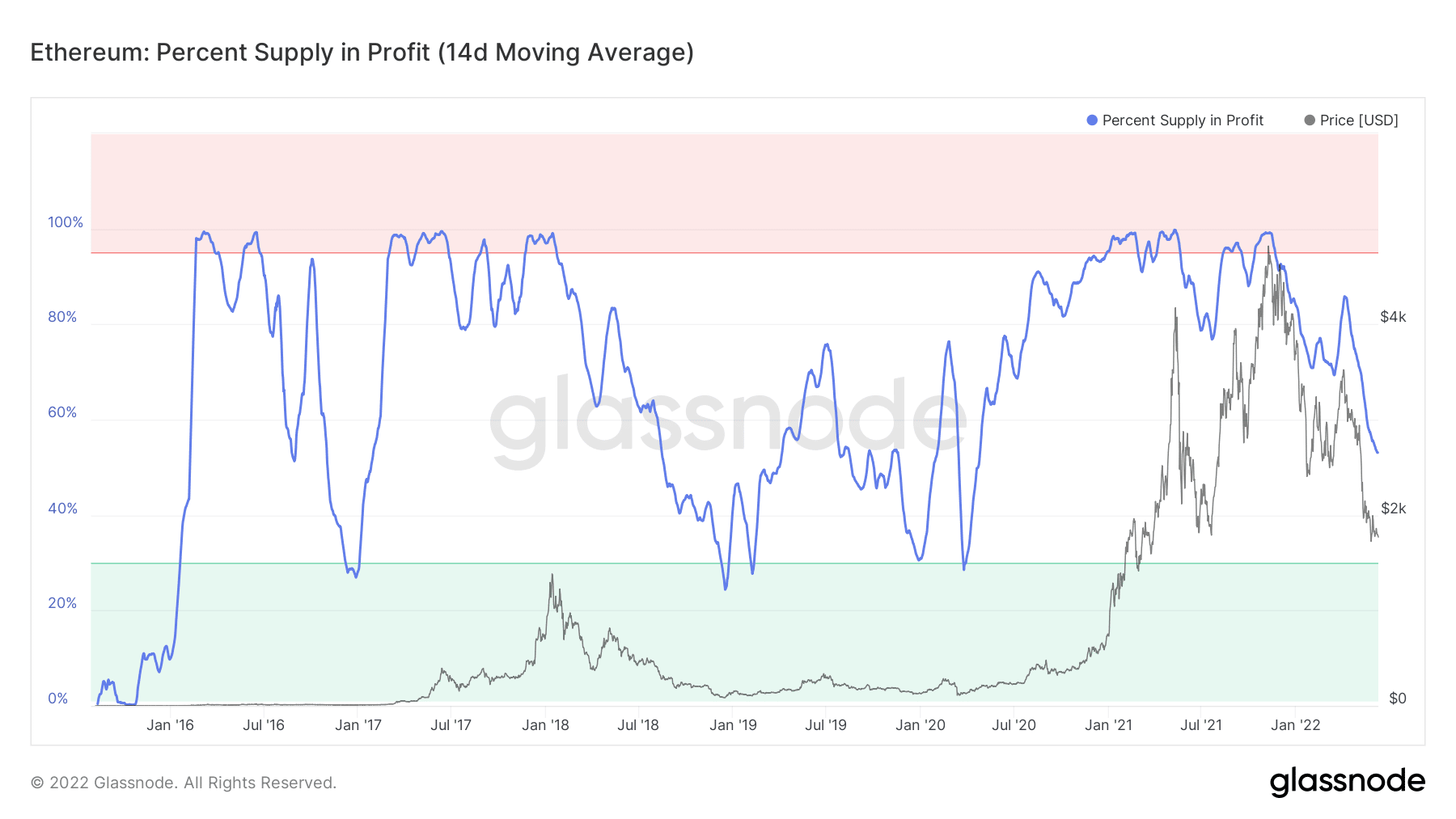 So, noting all the points above, Ethereum can be considered to be in a consolidation phase and buy-on-dips can be a foolproof strategy to abide by, going forward. But nevertheless, the possibility of further crashes cannot be ruled out amidst the impressively poor market sentiments all around.

Related Topics:Crypto crashETHEthereumfeatured
Up Next

Litecoin [LTC] drops beneath range lows, could $50 be next