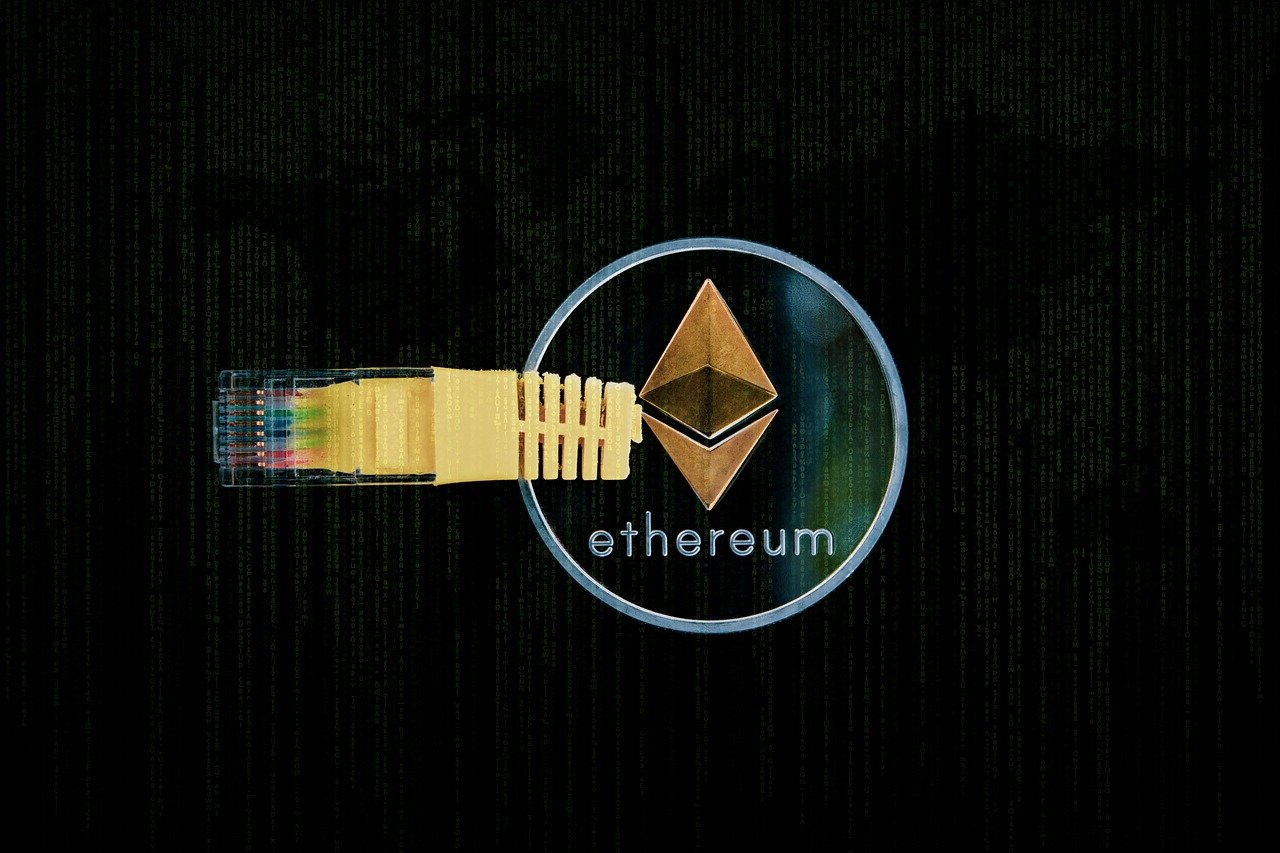 When the year began, Bitcoin’s dominance in terms of market cap was as high as 72%. At the time of writing, it was down to 46%. In the meantime, the world’s largest cryptocurrency has surged, and surged incredibly, with YTD returns of almost 100%. The market’s altcoins, however, have overshadowed the performance of the world’s largest cryptocurrency with astounding returns of their own.

While yes, Bitcoin’s general bullishness and new ATHs have played a role in the same, it can be argued that another altcoin has had a greater role to play in rallying the rest of the altcoin market – Ethereum.

The world’s largest altcoin has hiked by almost 400% since the start of the year, with YTD returns of 372% at press time. What’s more, like Bitcoin, the altcoin has hit and breached one ATH after the other over the past few weeks and months. Unlike Bitcoin, of late, its uptrend on the charts has been a little more consistent, something that has encouraged the aforementioned alts to hike despite BTC’s insistence on trading within a set price range.

What the scale of ETH’s movement suggests is there is a lot of bullishness behind the altcoin’s movement, bullishness the kind of which is perhaps missing in the Bitcoin market.

Ergo, the question – Is this too good to last? Is Ethereum’s price rally likely to be sustainable? That’s an important question to ask, especially if you’re a trader or an investor. However, it would seem that on-chain metrics are backing Ethereum for more upside, at least in the short-term.

This was the subject of Santiment’s latest Insights report, with the same finding that corresponding to ETH’s price hikes, the social volume associated with the altcoin has shot through the roof too. ETH-related mentions on social media, for instance, grew by over 255% in 10 days. In fact, the social volume for ETH on the 3rd of May went past levels seen in 2017.

What’s more, as the altcoin hit an ATH of $3,550 on the charts, ETH’s exchange flow balance strongly favored “coins moving off exchanges more than on.” According to Santiment, “this implies a higher chance of continued growth and lower risk of major selloffs.” This is so because more and more people are now moving their ETH back to their wallets for HODLing purposes, instead of keeping them on exchanges for possible sell-offs.

By extension, this finding also highlighted the confidence many investors and hodlers have in the price performance of the crypto-asset over the long term. 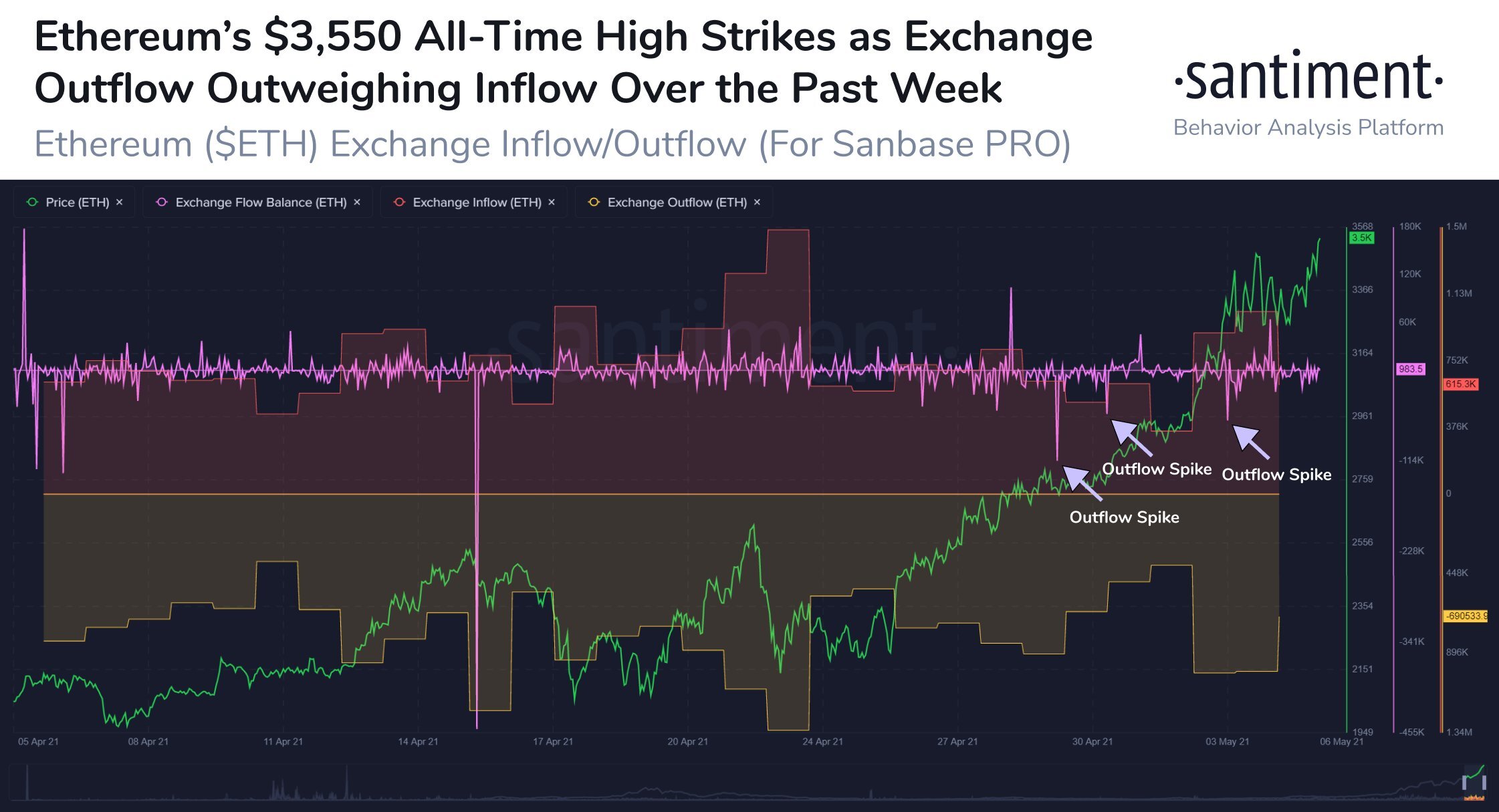 The aforementioned finding and its implications can be supported by the fact that over the past few months, ETH supply held by top exchange addresses has steadily dropped on the charts. Further, the top-10 non-exchange whale holdings have doubled over the past 8 months.

The past 8 months have seen ETH hike dramatically, especially on the back of recent ETH 2.0 developments and the wider market’s bullishness. While non-exchange whale holdings have peaked, smaller retail holders of ETH have also spurred the cryptocurrency to newer heights.

At the time of writing, Ethereum’s daily active addresses count had surged to 959.64k. A year ago, the figure for the same was as low as 400k, according to BitInfoCharts.

Finally, while ecosystem-centric developments like the progress with ETH 2.0 and the S&P Dow Jones launching an Ethereum index have contributed, what has also fueled such growth is how well DeFi is doing. Decentralized Finance has emerged to become a hit over the past year and since most of it uses the Ethereum blockchain as a platform, the former’s popularity and growth have brushed off on the latter.

This was evident in the last 10 days or so as coupled with exchanges losing supply and falling gas fees, value locked in DeFi doubled in just three months. 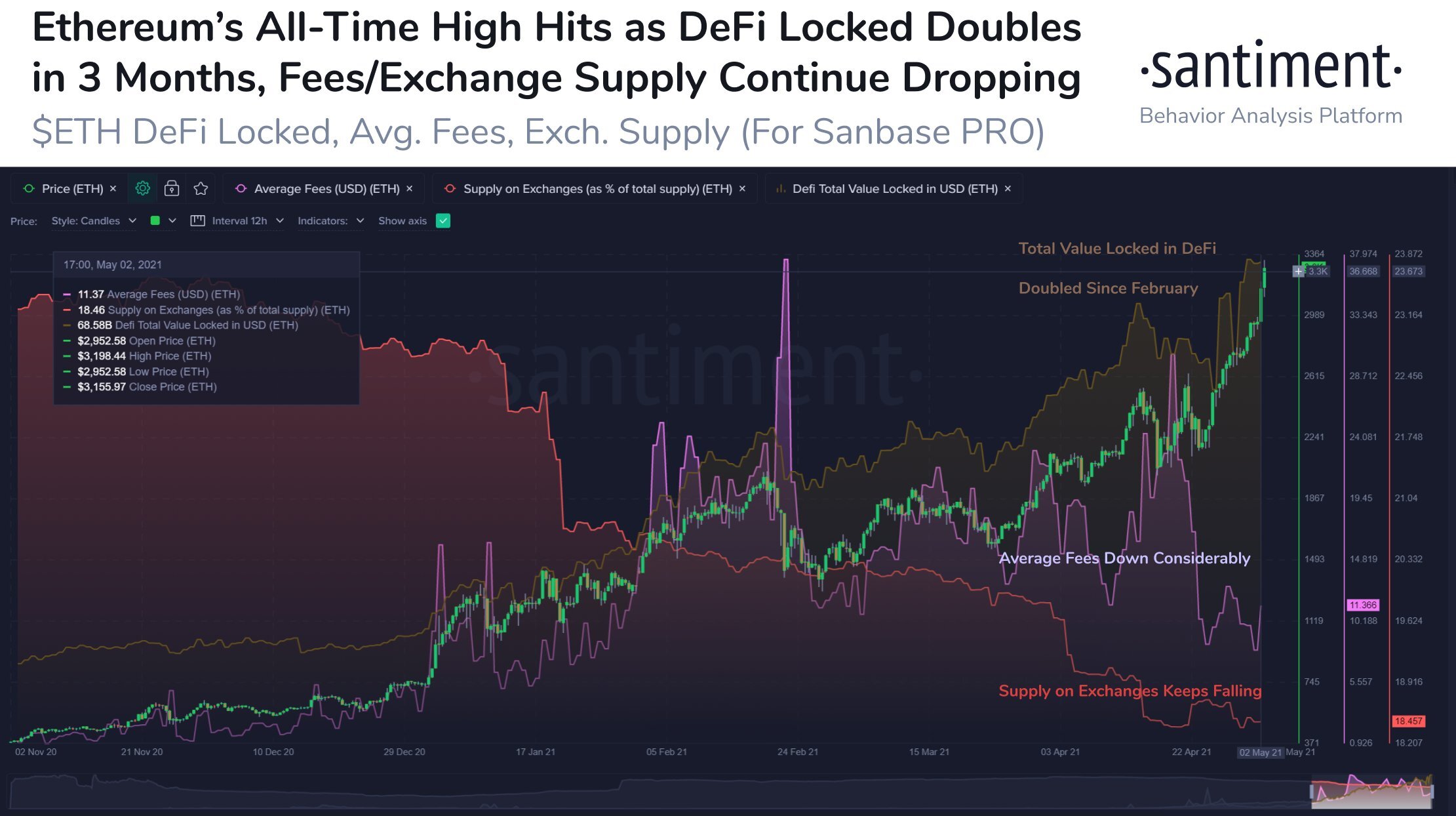 In the near term, therefore, ETH looks very likely to claim more upsides on the charts. Its long term, however, is a little more uncertain thanks to its strong correlation with Bitcoin. If the bouts of depreciation back in April were to repeat themselves, the alt might see corrections once more.

What is the driving force behind the increase in XRP sales this quarter?

Is this the first in a series of events that takes Dogecoin’s price down this road?