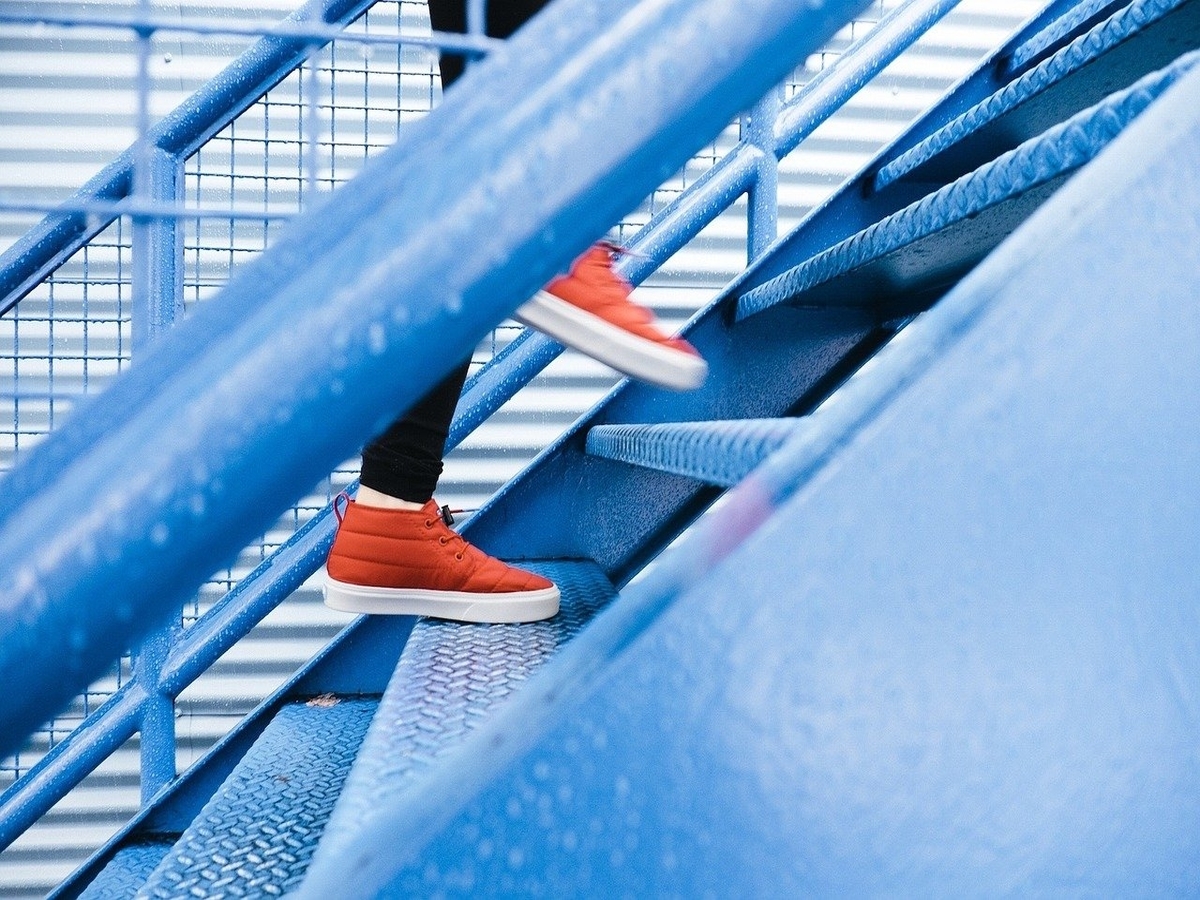 Just a couple of days back, Bitcoin crawled up to the $40k price level and managed to stir recovery hopes. However, at the time of writing, the world’s largest crypto had fallen by 2.3% in 24 hours and was again below the aforementioned level – to be precise, at $39,347.15. The consolidation phase has definitely not yet concluded and Bitcoin’s path to recovery is filled with a host of short-term roadblocks.

At this point, the 200 exponential moving average (EMA) is a key resistance level. Can Bitcoin break past this level? If it does, its price path to the mid-40s should be smooth sailing. But again, the same cannot be said with surety because ultimately, volatility is the name of the game. 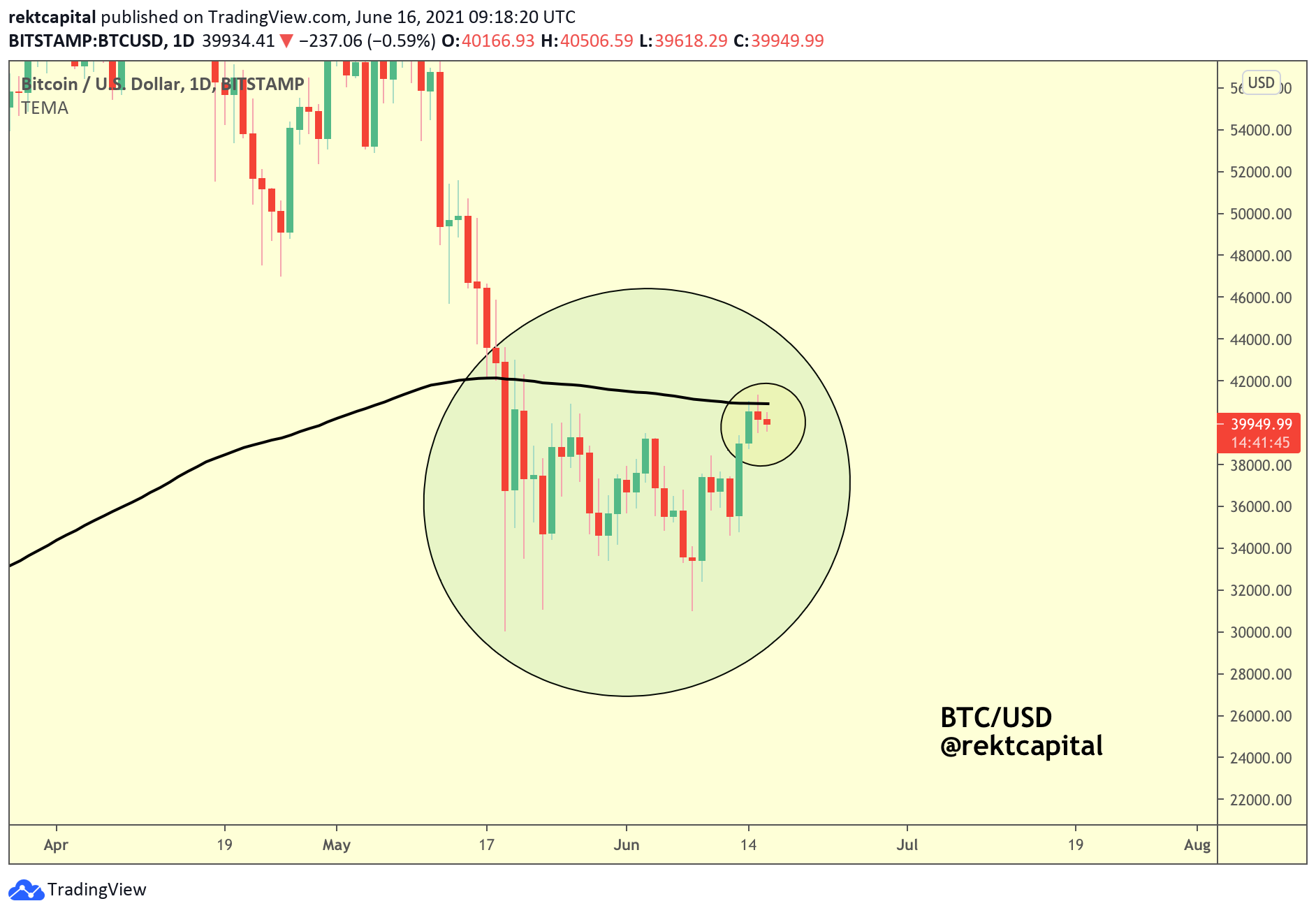 Interestingly, in May, Bitcoin registered a rejection of 20% in just one day from the 200 EMA (black line in the chart) and at that time, the resistance was pretty strong. However, the scenario now looks slightly different. The price merely witnessed a “small rejection” of around 6%, that too over the course of two days.

“The sell side pressure in this resistance is definitely changing and now it’s going to be interesting to see how far Bitcoin will dip on this recent rejection to just confirm to us that this 200 EMA is weakening as a resistance.”

As a matter of fact, the 200 EMA is a key long-term gauge of investor sentiment. Whenever investors see Bitcoin’s price action above the resistance level, they view it as bullish in the long term. On the other hand, if they witness it below the 200 EMA level, their long-term sentiment changes to bearish. 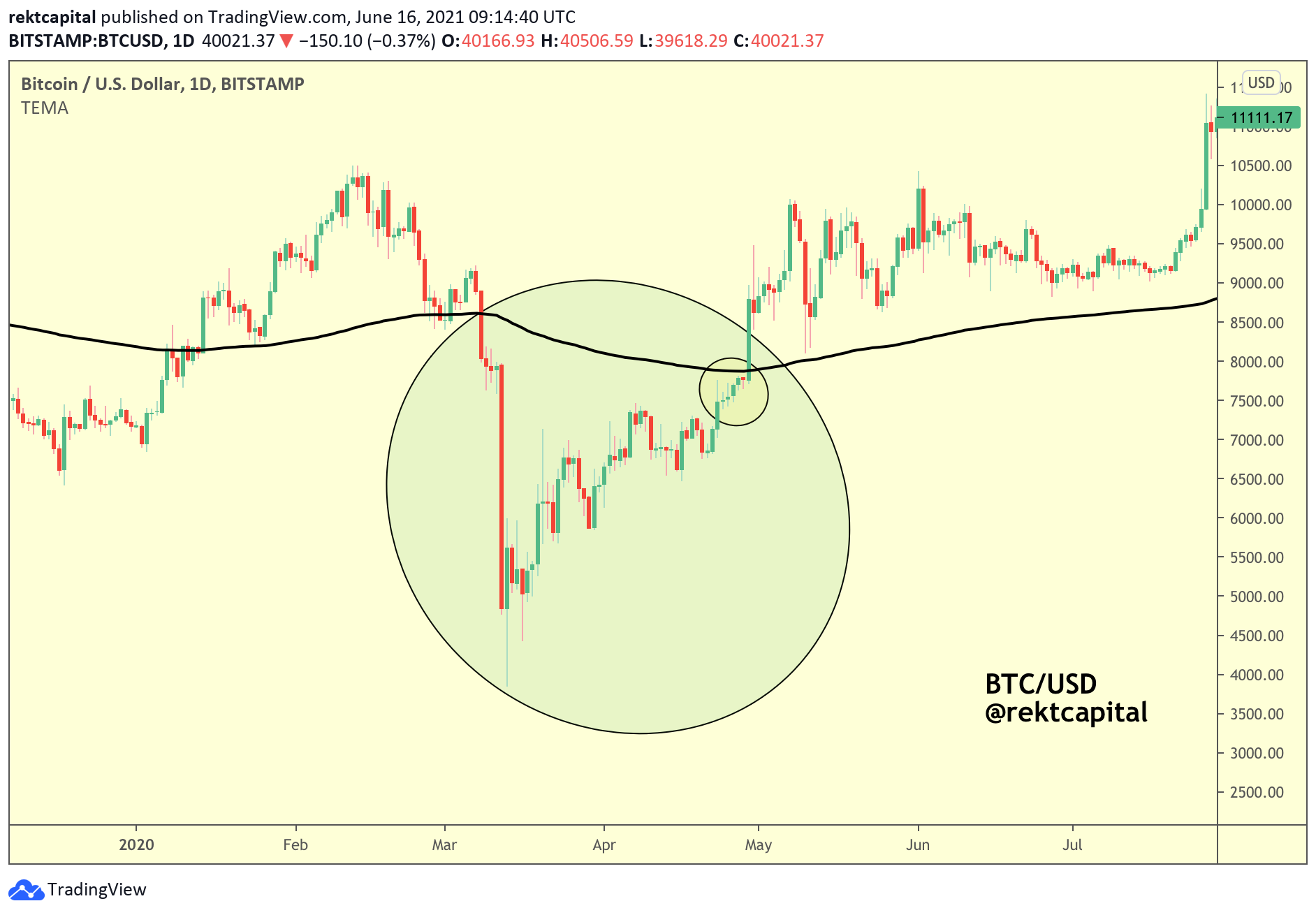 A similar pattern was observed in March 2020 too. After bottoming and settling below the 200 EMA, Bitcoin consolidated for a period of six days before breaking out into a new bull trend. However, March 2020’s retracement was twice as deep as the ongoing one. Drawing parallels, the analyst added,

“Now we are in this very key area where we’ve broken down from the 200 EMA, but we’re also just below it and might be consolidating here for a few days.”

Here, it should be noted that during this consolidation phase, the market would likely witness some pullbacks and relief rallying too.

Well, according to its current price movement and past precedents, yes. But again, the odds of the king coin breaking past the 200 EMA resistance also largely depend on how well its supports hold. Quite evidently, this support test would be a retest of this previous breakout pattern. Rekt capital concluded by stating,

“A higher probability scenario here that will lead to a success for the Bitcoin uptrend is if Bitcoin is able to re-test $38k as a new support. Doing so successfully would propel Bitcoin into upside continuation.”

With the 200 EMA already showing signs of weakening, Bitcoin’s price might soon head towards the mid-40k price range. Additionally, keeping the 21 WEMA in mind, the $33k to $42k range is set to be Bitcoin’s new home for the coming weeks.