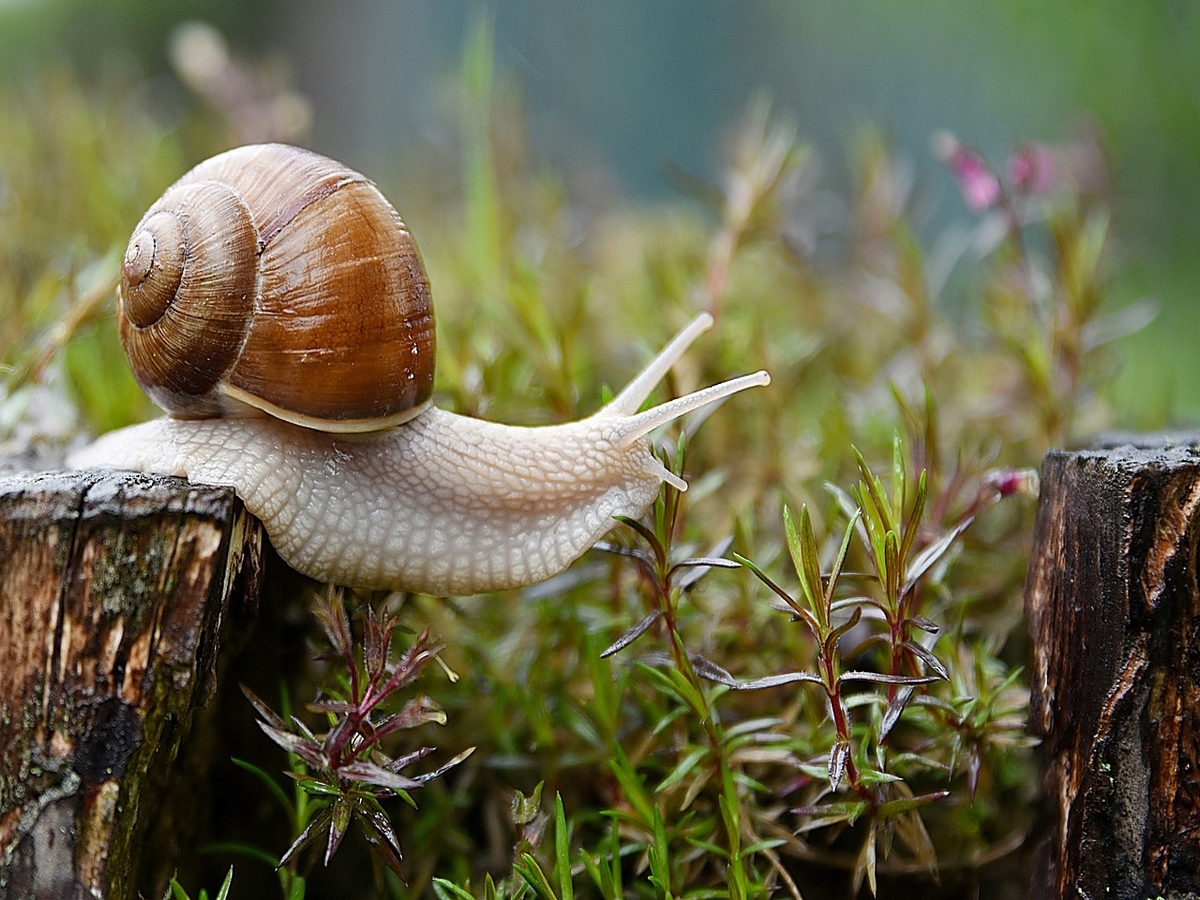 Owing to the Evergrande crisis, Bitcoin’s price has been see-sawing of late. Yesterday at this time, for instance, the king-coin was valued at $48.3k. However 24-hours down the line, BTC was trading at $44.4k. As such, Bitcoin has also been lagging behind on the price front when compared to its previous cycles. So, is the slow paced cycle an actual cause of concern or is it merely a passing cloud of apprehension?

A tale of higher highs and drawdowns

It is well-known that the Bitcoin market is cyclic in nature. Abrupt downs and deviations, like what the market is currently witnessing, have been observed in the past too. Hence, it becomes important to understand their essence before proceeding further.

The size of BTC’s drawdowns has never followed a consistent pattern. The January drawdown prolonged for a month while the one in February wrapped up within 18 days. Again, the March one ended up lasting for a month. Notably, during all the three drawdowns, Bitcoin seldom shed more than 30%.

As seen from the chart attached below, the current drawdown has prolonged itself for a period beyond 100 days. That being said, Ecoinometrics’ recent tweet highlighted that, in 40 days this drawdown would become the longest one Bitcoin has ever experienced outside of a bear market. 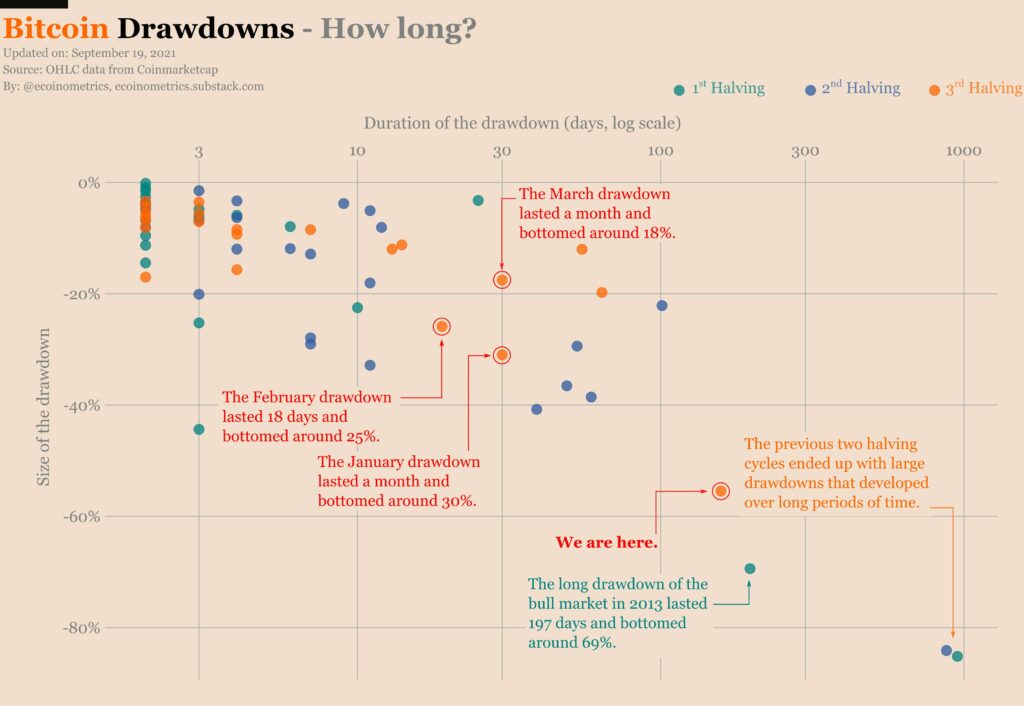 However, the on-going price trajectory depicts a familiar recovery pattern. When the historic S2F chart is viewed, it becomes quite evident that Bitcoin’s price pumped more than 6x after both the halvings – first from $200 to $1200 and then from $3k to $20k. Accordingly, a 6-digit valuation this cycle makes sense now more than ever.

In fact, popular analysts from the space have started predicting even higher targets for this cycle. Michaël van de Poppe, for instance, asserted that the breakout above the $60-65k resistance line would aid Bitcoin conquer a price target anywhere between $250k-$350k. Even though these numbers seem to be more gawk-worthy than achievable at the moment, it shouldn’t be forgotten that Bitcoin has witnessed hikes of similar magnitudes in the past.

Further, Bitcoin’s volatility has been comparatively low this summer. As seen on the chart, low trends have never been able sustain themselves for very long durations. Hence, a change in the volatility trend too can be expected soon. When that happens, Bitcoin’s price would get the required push to carry on with its rally. The king-coin’s price will likely move towards a new all-time high this fall. 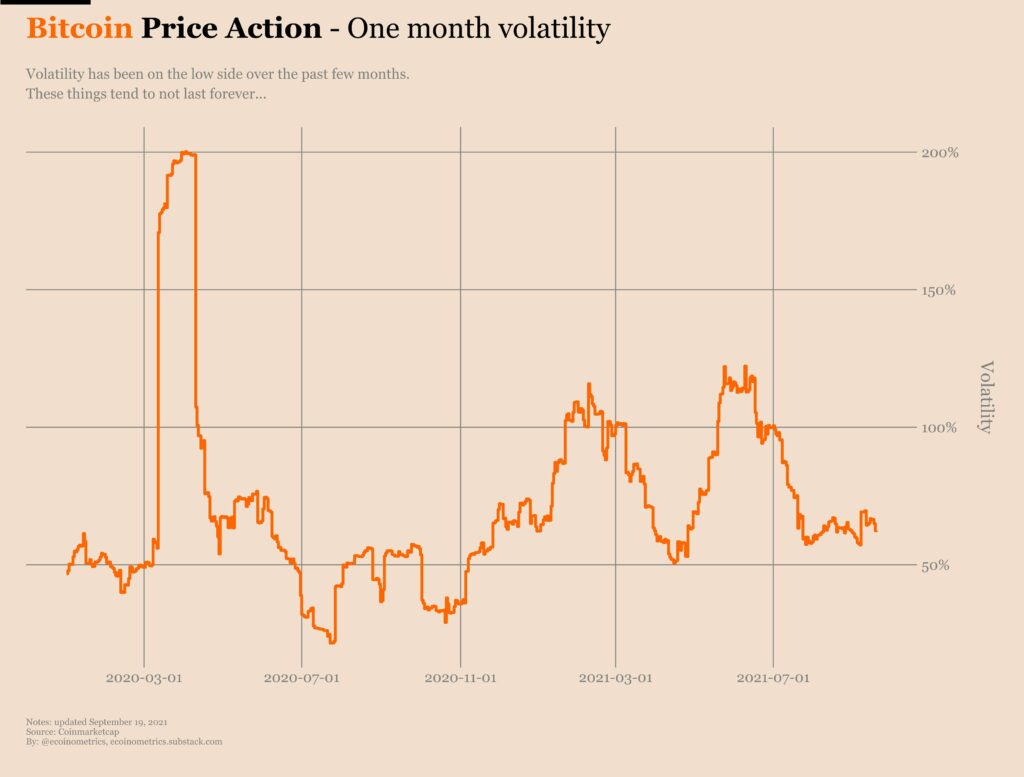 For Ethereum, the only way from here is up, BUT there is a catch