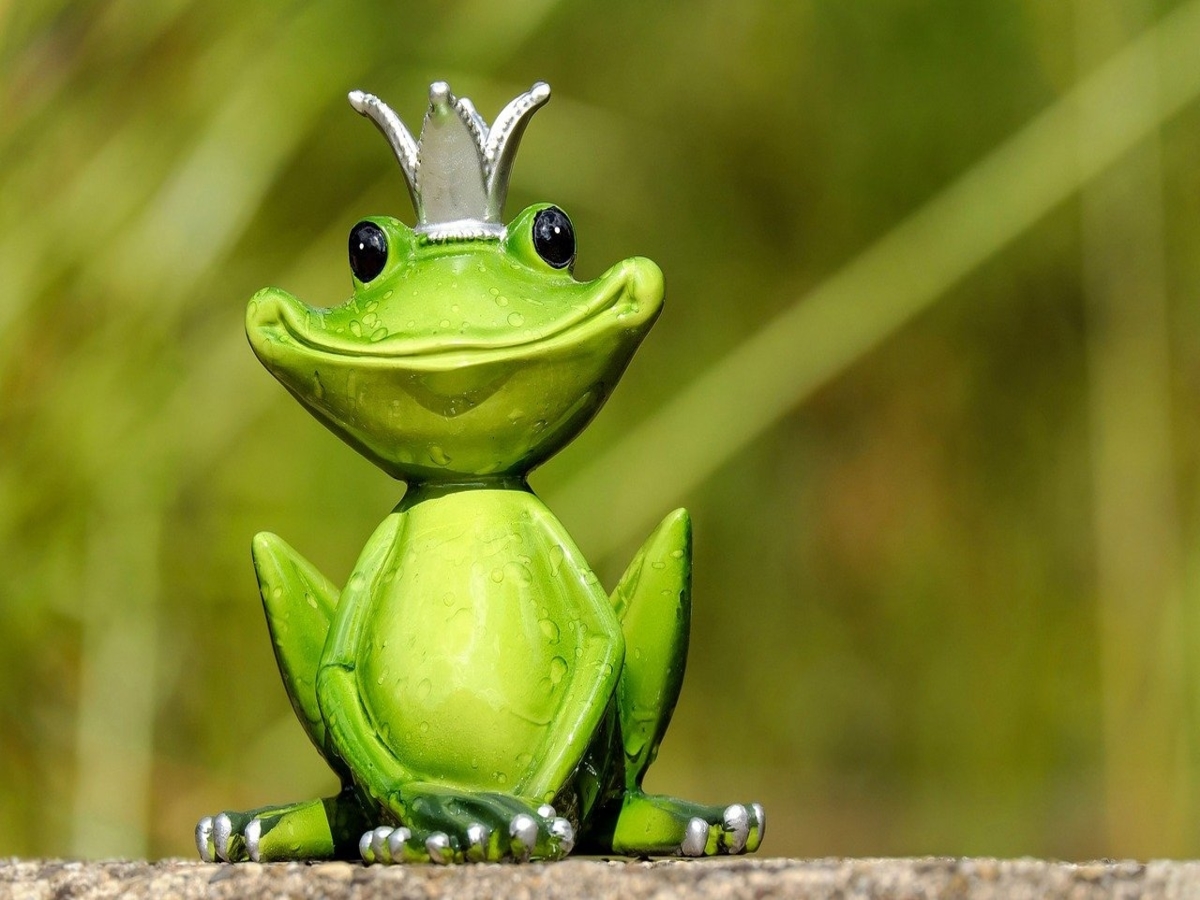 Amid the prolonged downward trajectory of the broader crypto market, old speculation with respect to Tesla and Bitcoin has resurfaced. Right after sparking another sell-off in the world’s largest crypto asset, the self-crowned ‘TechnoKing’ of Tesla, Elon Musk, had recently indicated that his company had not dumped any Bitcoin.

Nevertheless, according to Liam Denning’s recent opinion piece in Bloomberg, Musk’s electric vehicle company might have already done the unanticipated. He said,

“I’m really starting to think Tesla Inc. may have sold some Bitcoin already this quarter. I know Elon Musk tweeted something indicating otherwise, but that isn’t always a rock-solid evidence.”

Evidently, April was not a good month for Tesla, but the company managed to turn the tables around in May. With the recovery of the company’s stock on Wall Street, Tesla’s market cap bloated further. Not to forget, Tesla’s sales in China also rebounded in May, further giving the company a slight sigh of relief.

Nevertheless, Tesla’s new Model S “Plaid+” version has been canceled, as per Musk’s latest announcement, and owing to that, Tesla might face pressure at both the top and bottom line. This, according to Denning, is one reason why a Bitcoin sale might further look tempting to the car company.

Bitcoin investor Preston Pysh, recently claimed in a podcast that he was very skeptical of Tesla adding Bitcoin on their balance sheet in the very first place. Further elaborating why, he asserted,

“Simply because they don’t have the free cash flows that would warrant such a kind of bold strategy.”

Nevertheless, for Pomp Investments’ Anthony Pompliano had earlier projected a likely scenario where he stated that Tesla sought to tap into a new segment of customers from the Bitcoin mining space. Agreeing with investment strategist Lyn Alden’s stance, Push claimed,

“He [Elon] is a huge public figure and is learning in public.”

Additionally, Tesla’s Bitcoin value holding has clearly fallen below the average level at which the firm had invested $1.5 billion earlier this year, and if its China sales don’t deliver this month, it would only make sense to further expect the unexpected. According to CryptoTreasuries, Tesla holds 38,300 BTC bought at an average cost of $34,700. 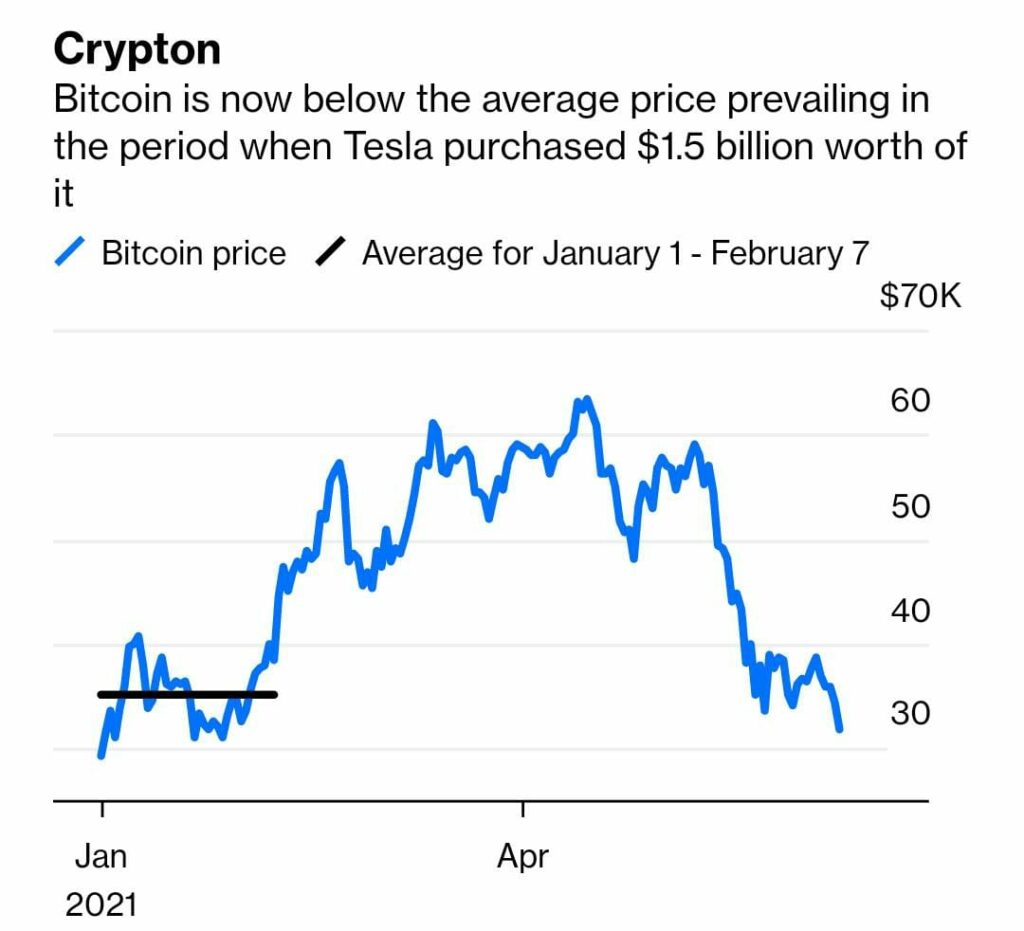 The well-known adage, “Every action has an equal and opposite reaction,” is even more applicable to the crypto market these days, all thanks to Elon Musk. Every action of his on Twitter has been followed by note-worthy price reactions on the charts. The ‘Elon Effect’ on BTC’s price has evidently altered the market’s dynamics completely. Every ‘unwelcome’ announcement from the Tesla exec has rubbed off negatively on the king coin’s price and vice versa.

Nonetheless, at press time, the coin had registered a 7.85% drop in the past week alone and was trading in the $34k range. 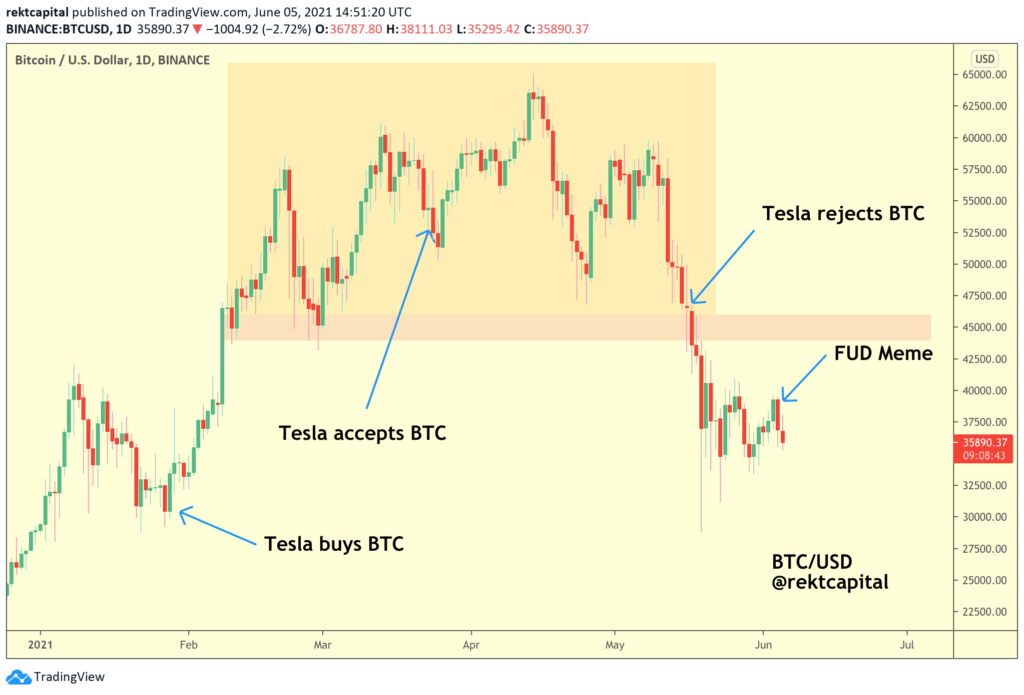