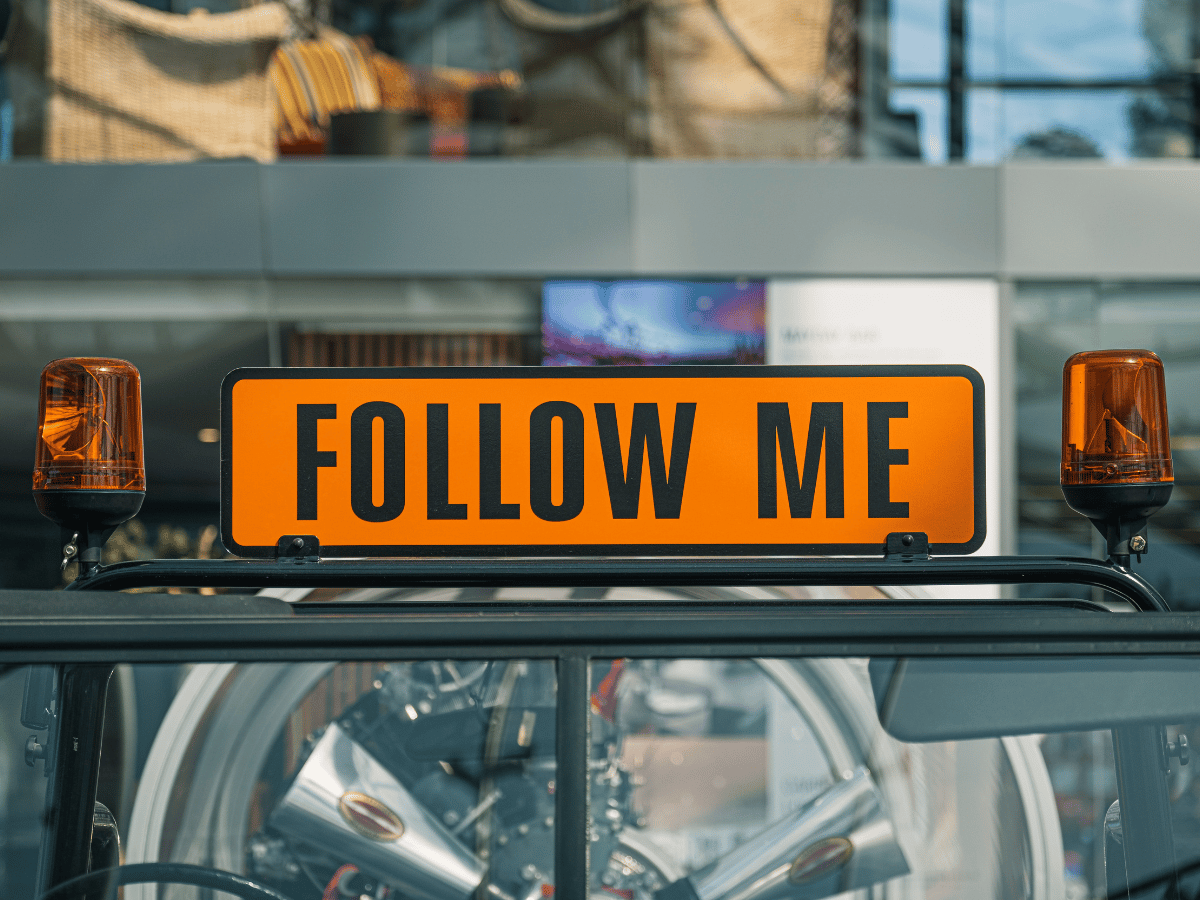 Life comes at you fast, they say— one day you are at the spearhead of revealing misdoings. A few weeks later, you are trying to give reasons why your exchange was facing no troubles despite the words on the street.

To put in clear terms, this story fits one man in the crypto ecosystem. And his name? Changpneg Zhao (CZ), the revered CEO and founder of the world’s largest crypto exchange Binance. CZ, as he is popularly called, was one of the first “wailers” of the crises that faced the FTX exchange in November.

Putting out a tweet related to its token, the Binance CEO announced that his firm was selling all of the FTX Token [FTT] holdings. This single announcement propelled the motor that drove FTT into ruins and the FTX exchange into extinction.

CZ: The hero to look up to?

During the period, many crypto enthusiasts viewed CZ as one who followed the openness and transparency that decentralization preaches. In fact, the weeks where the FTX back and forth heightened, CZ passively acted like an advisor putting out what to and what not counsels.

Interestingly, not many would have predicted that the man, his exchange, and Binance Coin [BNB] would be defenders of themselves shortly after the competitor’s wipeout.

In one of his tweets, CZ recommended that crypto exchanges should not borrow assets whether liquid or illiquid. At the same time, he mentioned that using an exchange token as collateral for borrowed assets was not the way to go, pointing out that BNB had never been used as collateral.

1: Never use a token you created as collateral.

2: Don’t borrow if you run a crypto business. Don't use capital "efficiently". Have a large reserve.

Binance has never used BNB for collateral, and we have never taken on debt.

yes, but liabilities are harder. We don't owe any loans to anyone. You can ask around.

Either way, the Proof of Reserves released by Binace showed that the firm had enough assets and was in zero debt.

However, quite a number of people were not happy with the way CZ handled the issues with FTX. Speculations thrived around BNB’s sustenance which might have pointed out to fishy activities by Binance.

What remained noteworthy was that BNB was the single asset that maintained a continuous gain against Bitcoin [BTC], hitting all-time highs against the king coin. As of 24 December, BNB had gained 36.34% against BTC in the last 365 days. This was one thing many top cryptocurrencies could not boast about. 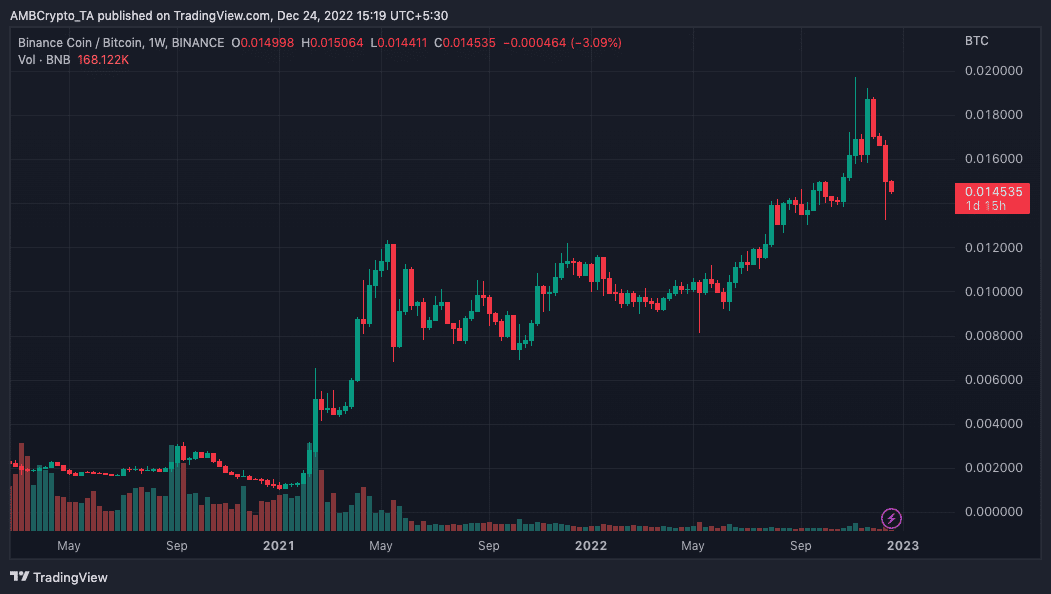 The BNB push could be lacking clarity

The question that trended around the community was where BNB’s demand came from. Recall that one of the ways FTX sustained the FTT longevity was not necessarily retail interest. Rather, it was the FTX action to keep up the pressure with its numerous large buys of the token.

So, the tittle-tattle was if Binance was doing the same with BNB. Whether or not they did, it still stands that engagement in such was no wrongdoing. But for the “FTX supporters”, Binance’ actions would have been hypocritical if that was the case.

However, there are clear differences between FTT and BNB which might make investors consider the latter as a more solid option. While FTT ordinary only acts as an exchange token, BNB powers a whole ecosystem called the BNB chain.

Hence, we can admit to far better utility. Nevertheless, there is no denying that BNB still relies on the Binance exchange.

Many miss this, think all "exchange tokens" are the same.

Meanwhile, Binance has been involved in some challenges lately. Of which, some could put BNB and its investors at risk. One problem that has kept the exchange trust on the brink of falling off is the audit process that Mazars abandoned.

In response to the deal collapse, CZ said that audit firms were new to the crypto accounting system. While responding to CNBC’s report about the big four audit companies opting out of auditing the firm, CZ said,

“Actually, many of them don’t even know how to audit crypto exchanges.”

Audit problems and a regulatory hammer in waiting

Meanwhile, Deloitte was one of the first who had audited Coinbase, meaning CZ’s opinion had no validity. The matter became even more questionable as it seemed that the exchange chief was avoiding traditional audits.

For most of 2022, Binance secured several licenses and numerously communicated that it was compliant with regulatory policies. However, the company was recently faced with regulatory heat after the report of the United States Department of Justice (DOJ) prosecutions.

While prosecutors were at loggerheads on what to charge Binance with, CZ risked facing criminal charges on account of processing illicit funds. If the DOJ goes ahead with the charges, not only Binance could be affected but BNB’s position could also be at stake.

However, the Binance CEO had clashed with Reuters before the 12 December report. Responding publicly to one of the stories put out by media provider, CZ posted a blog that read,

“I can live with the occasional negative news story – we’re focused on building and improving Binance and the blockchain ecosystem. We’re in this for the long haul.  It’s never about tomorrow, this year or even next year. We are building a company that we believe will last a hundred years or more.”

All of these have contributed to the FUD around BNB and the exchange. On the part of the non-disclosure of its physical offices, Binance addressed in the same blog. For the company, keeping its employees safe and complying with regulation was more important than public disclosure.

However, concerns remained rife over the Binace and Binance.US relationship. While CZ had clarified that both entities operated independently, the speculation stayed due to the same way Sam Bankman-Fried (SBF) claimed FTX.US was solvent before backpedaling.

Going forward, BNB might require more than  the return of the bull market to remain on good terms with the crypto retail community. More than demand and supply, Binance might need to exit his lackadaisical attitude towards the rampant negativity.

Although it had shown that the exchange and its coin were solid after massive outflow in recent times. But, allowing for proper audit could be the transformation that could help resist a BNB crash like FTT’s.

As of 24 December, BNB was trading at $244.74, 64.12% down from its all-time high. In terms of market value, the Binance Coin held strong at the fifth position at $39.15 billion. Meanwhile, CZ had come out to address the FUD about the exchange, noting that he could be right or wrong.

Why do people FUD about @Binance?

As Dogecoin bulls claw their way higher, can they push above $0.078